Every Dog Has Its Day (Non-Functional)

At long last, Dogs are celebrated in Magic as Dogs and not Hounds! This update affects only Hounds—Jackals and Wolves continue to have those types instead. Since every Hound is affected, this isn't even a functional change.

Another long-awaited change, milling has been keyworded as mill. We could never find a suitably resonant and obvious term, but the lingo spread very soundly, and we even saw players applying it to other games, so it's time to make it official! This doesn't represent a functional change, although some cards that would be ambiguous with Bruvac the Grandiloquent have clearer words on how they interact with His Loquaciousness. 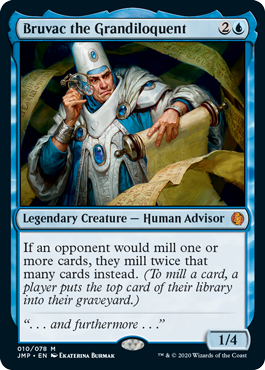 Not every single card ever that puts cards from a library into a graveyard has received errata; as always, check Gatherer if you need to know for sure. As a rule of thumb, any effects that simply put cards from the top of a library into their owner's graveyard have the "mill" update, even if they look at the milled card after moving it; but if an effect tells you to look at a card and then move it to a graveyard, that hasn't received an update. This parallels how you "draw a card," but you never "draw that card."