I saw which Guildpact card Taste The Magic was assigned by Scott Johns to preview, I was immediately excited and conflicted. Niv-Mizzet, the Firemind is about as cool a card as you'll ever see- but how would I explore its wonders without giving away too much about the Izzet? I wanted to talk about all the flavor that the dragon packs, but I didn't want to steal too much from the Izzet article I'd be writing soon enough. Well, in grand Izzet fashion, I decided to throw caution to the wind and go all-out right here! I'd figure out how to work the Izzet guild article some other time. (The Izzet are famous for back-burnering responsibilities to make time for fun and fancy!) Let's have a look at the fun and the fancy: 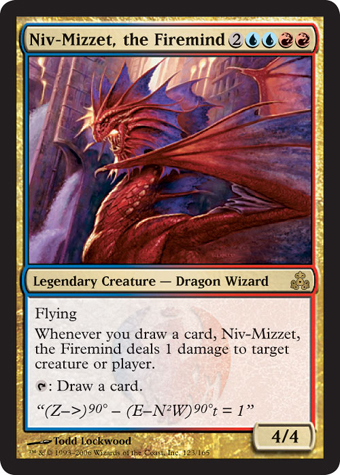 Now that's a doozy! Super-sweet art and tantalizingly mysterious flavor text for Vorthos to devour, fat-body dragon for Timmy to love, crazy combo potential for Johnny to grab hold of, and insane card drawing and control for Spike to wield. Who's left out? Yeah, that's what I thought. Timmy, Johnny, and Spike can bandy their takes on the Firemind on their own. Today, we're going to sample all that Niv-Mizzet brings to the table for we vast and hungry Vorthosian multitudes.

Some of you may be wondering why I chose to title this article “Niv-Mizzet, the Fountainhead”. It's really a dandy little coincidence. I had initially meant to capture only its literal meaning; “A chief and abundant source; an originator.” Then it occurred to me that the word “Fountainhead” bears a strong association to the Ayn Rand novel of the same name. The dandyness is that the novel's main character is a self-absorbed genius- a pretty good nutshell description of Niv-Mizzet! Given this coincidence, and the fact that “Fountainhead” starts with the letter F (making a nifty stand-in for “Firemind”), I am even happier with this yet-to-be-explored title.

“So how is Niv-Mizzet a chief and abundant source; an originator?” So many ways….where to start. “An originator.” Most literally, Niv-Mizzet is the Parun of the Izzet guild; the original guildmaster who signed the Guildpact 10,000 years ago. But this is not what I was getting at with “Fountainhead.” Perhaps a brief description of the Izzet guildmaster would be helpful.

Niv-Mizzet is the smartest living thing on the plane of Ravnica. This does not mean his SAT score would be 1 higher than the second smartest being. This means that he is so smart that he could, using #2 lead of course, fill in his little ovals in such a pattern that, when scanned by the computer, would reprogram it, giving him a perfect score and everybody else a zero, then the computer would shut off its fans, overheat, and burst into flames. Oh, and he'd be able to do this in the time it takes the other testers to open their booklets. Then he would burn everyone in the room wearing sweat pants thinking it would help them stay comfortable and, therefore, test better. Morons. (And yes, he can read minds- so he can spare the poor shmo who wears sweat pants because he thinks they're cool. He can,… but he doesn't. Why stop the barbecue!)

And so Niv-Mizzet has plodded through the last 10,000 years dealing with the feeble minds of the rest of the living, staving off boredom with random acts of folly and flame. It is in his guild that he has found a figment of inspiration. The geniuses and brainiacs of Ravnica flock to him, trying desperately to impress him (or at least not bore him to the point where he burns them). And what does one do who is head, shoulders, wings, and tail above everybody else? One becomes an egomaniac durned quick.

And that brings us back to “Fountainhead.” The egomaniacal, capricious, vain, and worthy-of-it all dragon has made sure that his guild and all its trappings all spring forth from him, the very lodestar of omniscient perfection. Let's take a look at what has sprung forth from the firebreathing fountainhead.

Hey! Did I just preview another card? I could get in trouble for that. But, we've got momentum, we can't stop now! We'll deal with the repercussions later! Look at this one:

I trust, after all that good stuff, that “Fountainhead” now makes all the sense in the world. I doubt you're complaining, even if it does not- given all the extra preview goodness we're dishing out here. I am going to leave you hanging right there. I do want to save up some juice for the Izzet article. But, before I cut you loose, I want to shed a little light on the flavor text on Niv-Mizzet, the Firemind.

What's the deal with that!? This is all I am going to tell you: it is not gobbledygook. It's the first and last thing Niv-Mizzet would say – in the quizzical sort of language that the Izzet mind easily deciphers.