Today's Lorwyn preview can serve up a feast... but only if you meet the dress code.

used to be more Magic articles about eating dinner at Churrascaria Plataforma. Churrascaria Plataforma is a Brazilian steakhouse in Manhattan's Theater District with a well above average salad bar featuring everything from sushi to risotto. No one cares; that's like going to the movies because you heard there was a new trailer for the next summer blockbuster. This is the real show: You sit down, you get a little disc, green on one side, red on the other; the disc starts off red. When you flip it to green—with green meaning, not surprisingly, go—tuxedo-clad men carrying swords start approaching your table. No, don't run away! The swords are covered in everything from prime rib to top sirloin; tables get carted up to you with beef ribs or sea bass. It never ends... until you flip back to red... and then they ask you if you want an espresso or a chocolate mousse. 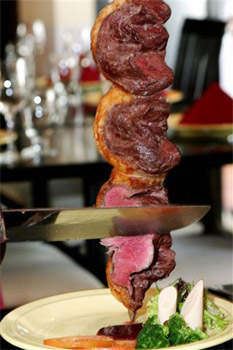 In the late 1990s and early 2000s, before Brazilian steakhouses became commonplace in the United States, Churrascaria Plataforma was extremely novel to me, and I took my far flung friends whenever a Pro Tour would happen by New York. Eating at Plataforma became a tradition of good luck to especially team Pro Tour players. You polish off two or three pounds of beefsteak with YT, you win the Pro Tour (or at least make back-to-back Top 4s). Right before Pro Tour–Seattle—which was a team pro tour in Seattle, WA and not New York at all—Jelger Wiegersma and Jeroen Remie made a point of a Plataforma stop off, and you know what happened the next weekend. They aren't even the team PT champs this story is about.

Three days before September 11, 2001 (just a hair over six years ago this month), future Pro Tour Hall of Famer and ESPN correspondent and Potato Nation (and Courtney's Boys and Zabutan Nemonaut) standout J. Gary Wise and a large contingent of international Magic players made the trek to Plataforma with me and some teammates. It was a crowded Saturday night for a popular restaurant in the heart of Manhattan... and our party was large; we waited forever for the staff to fill our reservation, loitering in a skateboard park across the street. After an hour or two, we finally got in... Everyone except for Gary.

Now Gary had been waiting a year to eat at Plataforma again. I basically had to twist his arm to come with me the year before, but I knew he'd love it and he eventually relented and broke from his busy schedule to join in John Shuler, Pat Chapin, Lan D. Ho, and others. In the twelve months between New York Pro Tours, Gary had built a raging anticipation that could be sated only by... well... two or three pounds of prime steaks would just about do it. He was even going to extend his stay in New York, just so he could have dinner there an extra time or two.

Why was he blocked at the door?

Plataforma is a pretty nice restaurant, but there isn't a formal dress code or anything. They don't make you wear a dinner jacket or a bow tie or anything, but apparently they do require (male) patrons to be wearing socks. Gary was wearing a pair of leather sandals... You don't really wear socks with those, usually. Like any man dead set on flank steak and top sirloin, Gary quickly solved his problem and procured a pair of navy blue New York Police Department emblazoned tube socks from a street vendor on the corner. Problem solved.

There is this notion that if you fulfill a minimum requirement of wearing socks (does that make you somehow classy?), you become eligible for something completely unrelated: eating lots and lots of steak. Was Gary a different person, a different cut of person, or even better looking with a pair of navy blue New York Police Department emblazoned tube socks he got from a street vendor? If you ask me—or a chuckling Gary—he looked a little silly, or at least sillier than he did a moment earlier... but the management appreciated the effort, and in return—and for sixty bucks or however much dinner cost back in 2001—Gary got to partake in a memorable dinner experience.

Sometimes Magic R&D, like the maître d' at Plataforma, asks us to put forth a little bit of extra effort, even when the effect seems unrelated. Some cards have synergies and limitations that are easy to understand... Look at Canopy Crawler. Canopy Crawler makes a lot of sense. It's a Beast from a tribally themed block, and its amplify ability is very much in flavor of being Beasts-tribal-linear. Canopy Crawler is pretty mediocre by itself, literally an overcosted do-nothing. If you add a couple of Beasts in hand, it gets above average (for what you are paying) very quickly, maybe even exceptional, and complements its size with the ability to help itself or other Beasts—you know, the kinds of Beasts that its design implies you would be playing with already; an Amplified Canopy Crawler speaks to efficiency, while complementing the other Beasts required for his amplify.

Imagine a card that said this:

... Ho hum. Nothing to write home about. Just about what you might expect from

. However, when you add the 187 effect, Too Good really proves to be too good. In fact, just about every blue deck (at least in Standard) would play it. In cycling formats, we run every Gilded Light and Renewed Faith that we can cram into our decks. Sometimes those cards do something, the rest of the time we are happy to draw cards for two mana and are never really unhappy with our decisions to play these cards in our decks. If Too Good were printed as-is we would have a problem. That problem would be a clear and present violation of the rules that have brought us the tier two metagame. Back in 1998, blue decks splashed for Wall of Blossomsand Gaea's Blessing... Don't you think every blue deck in the world would go straight for Too Good?

We don't want that. We don't want automatics. Formats where every deck has exactly one Zuran Orb are boring. We want worlds where the limit to the selection of cards in a deck is the creativity of its designer, not the number of cards on the restricted list.

that draws a card isn't broken; in fact, for serious Constructed, that costing is just about right. Too Good wouldn't really be too good on the mana in any color other than red... but it still feels a little too good; this is the kind of card that would stifle deck design creativity in the long run, a kind of an Impulse that can beat up on Isamaru, Hound of Konda and soaks up Mogg Fanatics. Printed as-is, Too Good would be an insult to beatdown players from Zhalfir to Otaria.

Say you wanted to print a card like that, though. How would you accomplish this goal without jacking the all-important, deck-limiting mana cost?

You would ask your players, if they wanted to join you in a feast of great plenty—or in its (in-game) Magic equivalent, an efficiently costed two drop with a compelling ability—to put on a pair of socks. You would print Silvergill Adept.

Silvergill Adept is, pardon the pun, an adept way to turn a card that would be Too Good into a perfect showcase for the new Lorwyn set. Look at everything that this card tells us...

The limitation, for Merfolk, is a tribally themed one. You could play Silvergill Adept in a deck with just other Silvergill Adepts... But your batting average on turn two wouldn't be very good (plus you could never play the fourth one for cheap, if it came to that). R&D wants us to play Silvergill Adept in a deck with other Merfolk. We've seen great Elves and Kithkin in other preview articles... I'd be willing to bet that Merfolk have a compelling, deck-making, Gaddock Teeg somewhere in the new set, wink wink, nudge nudge.

And don't go into it believing that Merfolk are the Magic's resident blue-skinned softball team. In what was easily the dumbest, most broken Extended format ever (second dumbest, at least), Nicolas Labarre and his Manta Riders finished in second place, finishing ahead of every single deck with Yawgmoth's Will and High Tide, beaten by one—just one—deck featuring Time Spiral (the card, obviously not the set, which would not be printed for eight or nine years).

The implementation of Silvergill Adept's limitation is a clever window into at least a few more cards in the Lorwyn palette. Really good drops that only get played when you can imply some backup? Surely they didn't use this on just one card, even if it is a hot preview number like Silvergill Adept. I smell a cycle.

Last of all, this card rewards a particular brand of deck design and a clear focus on the tribal theme. How many Merfolk are required to make a Merfolk deck... or at least to justify playing Silvergill Adept? The maître d' of chez Silvergill knows he has a good restaurant. He knows he is going to have people lining up out the door to eat at his place on Saturday night... He has to be a little selective about who he lets in because he can't possibly feed the entire city. However the right customer, the right deck designer, can shine with this card. The wrong one... well... Speaking of great two drops, Jon Becker used to joke about Mild Mongrel being mis-positioned in decks outside of Madness. You could play Wild Mongrel in anything, but short-sighted deck designers often missed the fact that he was little better than a Balduvian Bears in most decks. Silvergill Adept is going to function in the same way. You can only play it given a certain design constraint, you start to be able to play it once you start making an effort, but to play Silvergill Adept on the second turn—or in the middle game after you've played out many cards—you need to have a particular concentration of cards.

Silvergill Adept is thought-provoking and should be impressive in action. All in all, a great window into the future with Lorwyn.

Up next: Swimming With Sharks rounds out our Lorwyn previews with one of the guaranteed roll-up-your-sleeves staples of the new set. Plus...