No Really, You'll Lose the Game

templating team for a set is the group of people who decide how the cards should be worded. The Future Sight templating team had concerns about wording the Pacts—they wanted to make sure that the player appreciated the gravity of the "lose the game" drawback and remembered to pay it before moving on to that draw step. In fact, the very printing of the Pacts at all was at stake.

Recently, during a routine desk cleaning, Mark Rosewater happened upon this suggested wording of Slaughter Pact. Lest snippets of wisdom like this be lost to the great Recycle Bin in the Sky (or actually, to the one next to the R&D pit at Wizards—R&D is moving desks around so there's lots of desk-cleaning going on), today we enshrine this particular Post-It gem of Mark's here in Arcana: 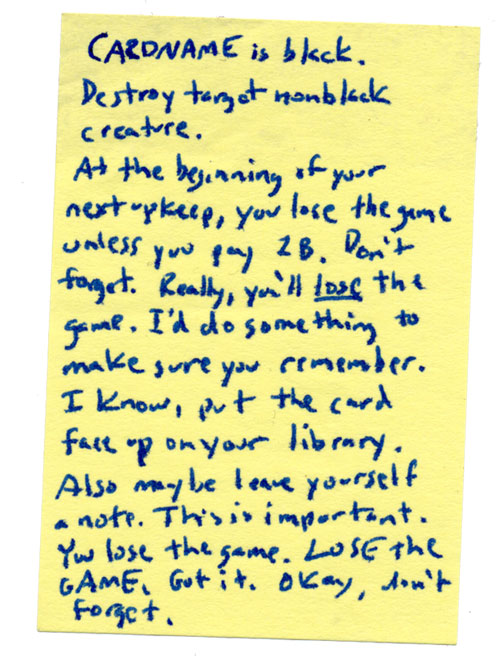 Templating is an art, no? As you can tell, it turned out that the concerns about that steep and wildly important drawback were not enough to kill the cards. As a result, planeswalkers everywhere can cast spells now, and pay for them in the future (even without Mark's emphatic template).