O My God, My Bro Won The Invitational

'm finally back home after having been abroad for three weeks. I've already talked to you about Amsterdam and Prague, but still not about Los Angeles. 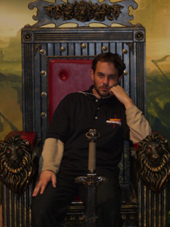 Personally I am not a great fan of LA, I'd advise anyone who wants to go on the west coast to prefer to go to San Francisco, except of course if you want to watch a basketball game or to attend the E3 convention. As the Clippers were playing at Phoenix, we just went for the E3.

It went pretty well, as I went undefeated. At first, a guy challenged me on Queens of the Stone Age/Go with the flow on Singstar. What a fool, I had 9150 level medium, and then looked for the game I wanted in my luggage back to France, but unfortunately, I couldn't find it.
Then I played table tennis on X-box with an American gamer and won 11-8. 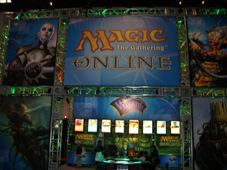 Oh yeah, at the same time, we also had a Magic tournament called Invitational. After losing to Kenji Tsumura last year at the Pro Player Race for one single point, I've had a tremendous revenge beating him at a horse race on PS2.

I'm sure you feel very glad for me but you'd love to know about the tournament itself. As you can find the online coverage on the same site you're visiting at the moment and as all the games are visible on Magic online, I'll spare you a report to just give you a few highlights from this week in LA.

I wanted to have a picture from Terry Soh for a French magazine, and I managed to have one on which he seems to be happy about his card. Still, some people made fun about him and his card, but nothing compared to Kai's Voidmage Prodigy yet. 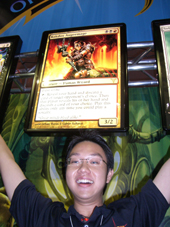 Pierre Canali always has a great plan for a Salsa club on every tournament. Unfortunately, these plans never turn out as planned. After a search on the internet he led his commando (which apparently ignored that Pierre’s plans never work out) also featuring another great dancer, Mr Osyp Lebedowicz. They ended up in a Mexican Restaurant serving some dishes with salsa sauce...

Kenji Tsumura's English has definitely improved after one year on the train. One of the best examples would be I guess Pierre Canali showing him some salsa steps at the restaurant (not the Mexican, another one). After two minutes of demos, Kenji just claimed « Pielu Canali dansu is sexual harrassument! ».

Tsuyoshi Fujita imitating Masahiko Morita at the US immigration: I've seen this about 32 times but I never get tired of it. It's a bit too long to explain. But trust me, this guy should quit Magic to become a showman.

Julien Nuijten called it the Lagvitational, as we've been having some connection problems during the whole week-end. As the officials took the great decision to remove the time limit from round 2 to 16 when they realized the problem, no timeout happened in the week-end. But it was still nice in the finals when Jeff had nothing in hand and wouldn't do anything for three minutes, to hear the commentaries « Now Jeff has to consider all his options ». And Jeff to answer: «Guys, I've no options, I've just lost the connection ». 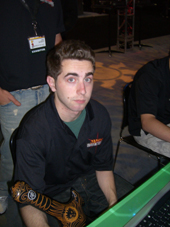 I thought Decadent sealed would have to be broken, and even to look more like Constructed than like Limited. And then I built my deck, which featured 0 rare and 2 uncommons (Steal Artifact and Annihilate) out of 21 packs! I still managed to go 2-1, taking two games to Mike Flores playing Steal Artifact on his Jitte.

We had to restart the MMV draft right after starting, for two players outside the 16 managed to join the tables!!! I'd like to thank the person who made my Volcanic Geyser a Dream Cache then. Man, if you read these words, you owe me a Mirage booster pack.

With my brother Antoine, we were attending our 3rd Invitational together. Antoine offered me a deal: if one of us won, we would both have our picture on the card. Antoine did and I might never have been happier of having a brother.

In 11 years Antoine and I have been playing Magic, we’ve been known as the Ruel bros the first 8 years, and that’s only 3 years we’re known as individuals. Consistency on Pro Tours and Grand Prix finally distinguished us as two good individual players, which we had been running after for a long time.
So many people called me Antoine since I'm playing Magic. Even lately, I had a kid making me sign his Psychatogs for: «I know you won a PT and it's your favourite creature ». I did my best to imitate Antoine's signature. Even at the E3 a big French TV channel interviewed me thinking I was Antoine.
I think my favourite one was, years ago, when I'm playing in a local event, and this kid arrived at the table. He looked really embarrassed, stressed. Even his voice was shaking: « Excuse me sir, aren't you (and right then I think «man I'm good yeaaaaah») Antoine Ruel's brother? »
I don’t think I’ve ever felt more stupid in my life. Or even half that stupid.

And finally, after all these efforts and friendly rivalry to become famous separately, I'm going to share my greatest accomplishment with Antoine. I went 7-8 on the Invitational, but I'll probably have half my card as Antoine won the all thing. I don't realize yet what it means exactly, I think I only will when opening our faces in a booster pack, but I've never ever felt like a prize won a tournament actually was a reward as much as that one. 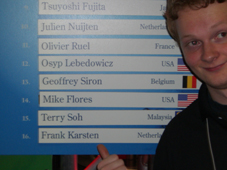 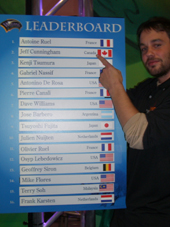 Olivier's Corner will soon fade away - instead, a new column 'Ask the Pro' will be created on the Tournament Center. You'll have the opportunity to ask me any question you have through this column and you'll find there my answers on a regular basis

You can already send your questions at olivierscorner@hotmail.fr