Decks inspired by some old nemeses.

to Old Favo(u)rites Week! Whew. Finally, an opportunity to get nostalgic.

Contrary to what you or I might expect, I don't have to be on-theme this week. That duty (or privilege) fell to my Wednesday compatriot, Frank Karsten. I have no doubt that he is at present being both absurdly informative and ridiculously thematic. I, on the other hand, will be barely informative and my column will have only a tenuous connection to this week's theme.

This is a runner-up because it's hard to include a card you use so much in a list of cards you don't like. I know this might come as a shock to some of you, but this spell kills just about everything for one freakin' mana. You could count the number of creatures immune from STP on one hand. Sure, that hand would have to have 100 fingers, but my assertion is otherwise entirely factual.

As a lover of creatures that cost two or more mana, I can't in good conscience endorse the playing of this spell. As a lover of not losing to troublesome critters like Akroma, Angel of Wrath and Darksteel Colossus, I can't in good conscience leave these out of my decks. At least in Elder Dragon Highlander, I can only play one. That's my compromise.

And now for the semi-random top three.

If there is an unholy trio in Magic, this is it. No offense to Linda, Dolly, and Emmylou, but they have nothing whatsoever to do with Magic: The Gathering. These three cards have been wreaking havoc and crushing dreams for over a decade. They're like the New York Yankees, except powered by black magic. Oh, wait... never mind. 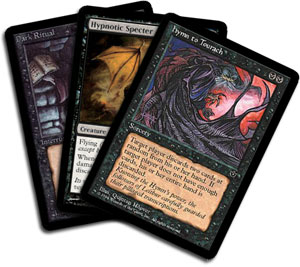 By now, everyone knows how it goes. Turn one: Dark Ritual, Hypnotic Specter. Turn two: Hymn to Tourach. Make your opponent discard three cards at random. It's the randomness that makes it so brutal. Since you can hit so early in the game, there's a good chance your opponent will discard lands. On turn ten, this might not be so bad. On turn two, it can be impossible to recover from.

Now, don't get me wrong. I can take my lumps like a professional lump-taker. I'm not afraid of getting destroyed by good cards or by so-called "cheap" strategies (the, um, unholy-esque trio of countermagic, discard, and land destruction). I'm a grown-up. I know that other grown-ups have different ideas of what is "fun." It was just that for a stretch, I seemed to play against nothing but decks containing these three cards. They set a benchmark for deck-efficiency that I just didn't want to meet with my own goofy concoctions. Eventually, my patience, like my boxer shorts, wore thin. My lightly-sautéing disgruntlement boiled over into a mixed metaphor of piping-hot frustration. In an uncommon fit of pique, I posited that one could win more than one's fair share of games with a deck consisting of four Rituals, four Hypnos, four Hymns, and forty-eight Swamps. I was adamant. I was also lazy. Besides, I was too tired from throwing a tantrum to put my little hypno-thesis to the test.

But, hey, after three years or so, I got over it. I learned to stop worrying and love plagiarizing Stanley Kubrick. Then I went even further and actually fell in like with discard. It started with a serendipitous meeting between myself, a set of Megrims, and a semi-unholy trio of Bottomless Pits. I experimented, like young magicians do, with these gateway discard spells. Later, when I discovered the following deck, I fell into full-blown love. I can't remember exactly where I found it, but it's legal in Pauper Magic (all commons) and was legal in Standard at the time, so perhaps I got it from the Pauper homebase found here.

3 Pillory of the Sleepless 4 Faith's Fetters

4 Blind Hunter 3 Pillory of the Sleepless

4 Shrieking Grotesque 3 Pillory of the Sleepless

I put the deck together online for about a dollar and I definitely got my money's worth. Er, wait, that makes it sound bad. It was worth every penny? Money well spent? Pick something that doesn't sound sarcastic.

I don't know if there's been a deck in the last year that I've had more fun playing. The deck was just good, could pull off a bunch of neat tricks, and even had a bit of a toolbox, which I find particularly hard to resist. Of course, a large part of the deck's effectiveness comes from its ability to rip apart your opponent's hand. I remember one game where I just played lands and discard spells for the first five turns, going Ravenous Rats, Shrieking Grotesque, a ninja-ed out Okiba-Gang Shinobi, followed by a replayed Grotesque and a second Ravenous Rats. That game didn't last much longer. Yeah, I felt a little icky, but I figure you don't have to pull your punches if you're playing Pauper.

Apologies for that alliteration. I promised myself I wouldn't do that. Especially with the letter "P."

We've hit number two in our countdown, and, um, yeah, it's a little random. I'm sure I'm not the only spellslinger who gets his curmudge-on because of a friend's unlikely-yet-annoying pet card.

You see, my friend Greg (whose baby will probably be named Kaervek the Hairless at some point, if only by me) had picked up a playset of Shrines and was looking for some deck ideas. Always helpful, I referred him to old Deck Clinic article that Pro Tour Hall of Famer Alan Comer wrote for the Sideboard, which you can conveniently find here.

Little did I know, I had opened Pandora's Box. Worse, that box was full of squirrels.

The deck is pretty simple really. It's basically just cheap card draw, counterspells, and Nantuko Shrines, with Temporal Spring acting as your all-purpose problem-solver. I'm sure my utter lack of success against this deck was largely my own fault. At the time, all of the decks that I had in circulation were white- or green-based creature decks, which aren't exactly known for their ability to churn through a deck.

Of course, even the blind non-squirrel player will find a nut, and I eventually evened up my record against the Shrine deck. For purposes of my sanity, I'm gonna say that an approximately 1-30 record makes us even. There is no further need for me to prove that I can beat that deck. I did it once and that should be enough to satisfy all but the pettiest Gregs. My fortunes changed while I was playing this deck and I somehow managed to get a Cavern Harpy into my graveyard while I had a second one in my hand.

The deck can be neatly divided into two parts. The Man-o'-War half is, believe it or not, full of creatures that "combo" with Man-o'-War. The Merchant Scroll half is, shockingly, full of cards you can fetch with Merchant Scroll. Scrivener is really the only point of intersection, comboing as it does with Man-o'-War and friends while returning the spells you fetched with your Scrolls. One of my favourite things to do was get the Memory Lapse "lock" with Cavern Harpy and/or Wormfang Drake and Scrivener. Meanwhile, Scrivener + Withdraw was a sort of precursor to the famed Izzet Chronarch + Peel from Reality combo and allowed you to bounce a creature each turn. All of this rather expensive tomfoolery was cheapened by the Nightscape Familiars. They just had no sense of decorum.

The deck is actually really fragile and depends heavily on being able to stick a Man-o'-War. Otherwise, you just don't have enough early game creatures to be able reliably play your Harpies and Drakes. As much as I love a toolbox, those Merchant Scrolls should probably be something like Sage Owl or, if you prefer, Spire Owl.

One of things I like most about this deck are the names of the creatures in it. Faceless Butcher is in the top ten of all time, in my opinion. Scrivener evokes so many memories of past, uh, scrivening. I'm also a fan of Wormfang Drake, Flametongue Kavu, and Goretusk Firebeast, so I'm surprised that it took me until this exact moment to realize that their names are put together the same way. The formula would seem to be:

Noun used as a quasi-adjective + part of the mouth + creature type. Here it is in action:

Wow! They sound like totally (not) real Magic creatures, although, admittedly, that last one is a bit of a mouthful.

Why am I never prepared for this? It seems like every time I go to test out a new deck that relies on keeping an enchantment (or artifact) on the board for more than one turn, I run into someone (usually my friend Justin) playing a deck full of token generators and Aura Shards. I don't actually hate this card. It's actually good and fair. It's more of a running joke between friends, where one of us plays it and I shake my fist in mock anger.

Obviously, there are things I could do, steps I could take, moves I could make, to prevent myself from auto-losing to a fair card. For instance, I could, like, try to squeeze some answers into the decks I play. Decks like this one:

2 Eternal Witness 3 Waiting in the Weeds

This is a deck I actually use in my casual games in real life. It's full of little synergies. Mulch fills your hand with Forests which you can play because of Gaea's Touch, while at the same time it dumps Grizzly Fates into your graveyard and otherwise spurs you on to threshold. Gaea's Touch helps in a couple ways. Playing more Forests powers up both Waiting in the Weeds and Beacon of Creation, and you can sacrifice superfluous Touches for mana to get more mileage out of Waiting in the Weeds (which, unlike Beacon of Creation, only counts untapped Forests). Your token-makers combine with Death Match to Wrath the board every turn. Hmm. It seems like this deck is just begging for Privileged Position.

Last Day for the Auction of the People

Today is the last day to submit a deck for the Auction of the People deckbuilding challenge. You have until 11:59 E.D.T. to read the rules (found here and here), build a suitable deck, and send it to me by clicking on that link at the bottom of the page and filling out the form.

Good luck! I'll do my best to keep everyone up to date on the status of the Auction in the coming weeks.

Until next time, have fun with old favo(u)rites.