Once a Spawn a Time

A Brief Guide to Spawnwrithing

When you're building decks around a particular card (in this case, Spawnwrithe), one way to start brainstorming is to break the card down into its component parts. I rarely do this as formally as I'm about to, but the following list consists of things that I always keep in the back of my mind when I'm trying to find a new and/or fun way to use a card.

. Being a three-mana green creature usual means one thing: mana Elves! Why wait all the way until turn three when you can play a turn one Elf or Birds of Paradise and play Spawnwrithe on turn two? Get that guy out there lickety-split, before your opponent has a chance to get set up. The other advantage to the

mana cost is that the single green means Spawnwrithe is playable in two-, three-, four-, five-, and possible even six-colour decks!

Also note that the converted mana cost is three, which means you can return it to play with Order of Whiteclay or Unearth, play it for free with Aluren, and if you want to get fancy, with a Conspiracy in play you can search out Spawnwrithe with a number of Rebels and Mercenaries or return it from your graveyard to your hand with a variety of Kamigawan soulshifters.

2. Spawnwrithe is an Elemental. What does this mean? Well, for starters, you can tutor for it with Flamekin Harbinger. You can also play it with Smokebraider mana or from your graveyard with Horde of Notions. You can play it cheaper with Brighthearth Banneret, champion it with Supreme Exemplar, sacrifice it to Hearthcage Giant or Seething Pathblazer, put it directly into play with Incandescent Soulstoke, and you can reveal it to play an untapped Primal Beyond or a discounted Flamekin Bladewhirl. You know, the usual. Putting Spawnwrithe into an Elemental deck is just what a reader named Isai did. It's also what David Williams did at Pro Tour – Hollywood when he showed up with this (probably insane) twenty-land, thirty-seven-creature deck:

4 Magus of the Moon 4 Smokebraider

4 Grove of the Burnwillows 4 Firespout
75 Cards

3. Spawnwrithe is a 2/2. It's a Gray Ogre (or a souped-up Grizzly Bear), and, as a result, it's about as fearsome in combat. Anything from a large-beaked old crone to a bipedal burro can take it down in a fight. Obviously, there are ways to remedy this, but for now, I'm going to look at how this bug can actually be a feature. For example, the two power makes Spawnwrithe a viable target for the abilities of Dwarven Warriors, Dwarven Nomad, Crafty Pathmage, and Soratami Mirror-Guard. If you'd prefer not to rely on a fragile one-toughness creature to sneak your guy through, you could do as Goran B. suggested and use Writ of Passage. Tawnos's Wand is another permanent, power-checking way to make your Spawnwrithes unblockable, while Hearth Charm or the obscure-for-a-reason Runed Arch provide a one-shot version of the same ability. Similarly, its two power allows you to fetch Spawnwrithe with Imperial Recruiter and return it from your graveyard to play with Reveillark, while its two toughness makes it work with Goblin Kites, Phantasmal Mount, and other improbable modes of transportation.

Just watch out for Aysen Bureaucrats!

4. Spawnwrithe makes *gasp* Spawnwrithe tokens. I'll start with the more obvious stuff first. Any token producer could benefit from Doubling Season, Rhys the Redeemed, or Parallel Evolution (as Christian M., Drake, Christoffer and others pointed out by email). Copying Spawnwrithe itself with Dual Nature, Followed Footsteps, or Spitting Image seems like it could get out of hand rather quickly. Most tokens, for all intents and purposes, have a converted mana cost of zero. Since Spawnwrithe makes tokens that are copies of itself, those tokens will also have a mana cost of

. This means you would have to pay three mana to kill them with Pernicious Deed, three fuse counters to destroy them with Powder Keg, or pay

to kill a single one with Disembowel. It also means that the green-mana-symbol-loving Primalcrux will get +1/+1 for each Spawnwrithe token you control. And because the tokens also bear the name "Spawnwrithe," they can all be pumped with Echoing Courage, killed with Echoing Decay, or bounced back to your hand with Echoing Truth.

Just watch out for Winnow!

5. To make these tokens, Spawnwrithe has to deal combat damage to a player. As far as I can tell, we can give Spawny some assistance in a couple ways. First of all, we can give it some kind of non-trample evasion. I've already talked a bit about making it unblockable with certain cards, but there are many, many other ways to accomplish the same thing. Besides straight-up unblockability with something like Protective Bubble or Deepchannel Mentor, as suggested by Kevin G., you can grant Spawnwrithe a less reliable, but still effective, form of evasion like flying, fear, shadow, protection from [relevant quality], or landwalk. 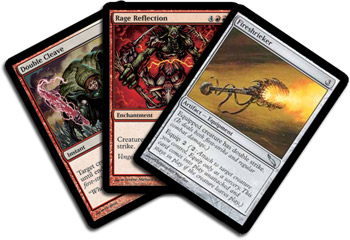 The other thing we can do to help out Spawnwrithe is to allow it to hit more than once per turn. There are a few ways of doing this. You can give it double strike with something like Double Cleave, Battle Mastery, Rage Reflection, Sunhome, Fortress of the Legion, or Fireshrieker. Or you can give yourself another attack step with a card like Fury of the Horde, Waves of Aggression, or Godo, Bandit Warlord. (Note that unless your creatures have haste somehow, any Spawnwrithes created during the first attack step won't be able participate in round two.) You can also just take another turn with Savor the Moment or another two turns with Time Stretch if you want to make a bunch of Spawnwrithes all at once.

6. Spawnwrithe has trample. Admittedly, trample is a form of evasion, but it gets less effective the smaller the creature. Spawnwrithe, with its two power, can only ever trample over one-toughness creatures and there's a good chance that it won't survive any encounter with another critter. As always, there are ways around this, most notably pump effects. Moldervine Cloak, Griffin Guide, or Gaea's Anthem will do it on a permanent basis, while Giant Growth and Barkshell Blessing will help you get through once. Conversely, cards like Snakeform and Ovinize can shrink opposing creatures to the requisite one toughness. The reason I made this a separate category is because there are cards (okay, just one—Stonebrow, Krosan Hero) that care about trampling creatures.

The Writhing On the Wall

With that out of the way, how about some decks that I may or may not be playing this weekend (I don't want to give away all of my "amazing" "tech" before Nationals). The first deck comes from Erik K. and it's perhaps the simplest version of a Spawnwrithe deck. It's a straightforward mono-green bash-a-thon, with mana Elves to speed things up and pump effects to, uh, also speed things up.

There are plenty of other cards that could fit in here. The three-drop slot could be filled by a number of creatures. There are tons of great options these days, such as Yavimaya Dryad, Kitchen Finks, Boggart Ram-Gang, Gloomwidow, or Eventide's Cold-Eyed Selkie, Stalker Hag, or possibly even Rendclaw Trow. Spectral Force might find a place, since Scryb Rangers are already in the deck. Pendelhaven seems like a fine inclusion. Since I'm going to be playing lots of unsideboarded games during the gunslinging, a card like Wickerbough Elder might also find a home in the deck. But who really knows?

A number of players suggested that giving Spawnwrithe haste would be a good idea. It is! Gene G. used Fires of Yavimaya, some cheap tramplers like Slith Predator, and Stonebrow, Krosan Hero to pump them all up. Instead of Fires, or Anger, or Lightning Greaves, I think I'm going to use one of my pet cards, Ashling's Prerogative, which I was reminded of by William R. This time I'm going to use almost all oddly-costed creatures including some familiar faces. (This might be the ideal deck for both Double Cleave and Waves of Aggression. Hmm...)

This is another deck where you there are some nice budget alternatives. If you wanted to focus more on Stonebrow, you could try Hungry Spriggan and Scuzzback Marauders since they both have an odd mana cost, have trample, and fit the colour scheme.

A number of people wrote in suggesting various ways to enhance Spawnwrithe, many of which we've already looked at. Eli D. suggested using Stonewood Invocation and Evolution Charm to make sure your Spawnwrithes can connect. Cold-Eyed Selkie fits right in to this sort of strategy, both wanting to connect and wanting to connect for a lot. In a similar vein, another reader, Skander, suggested playing Cephalid Constable alongside Spawnwrithe and using Wings of Velis Vel to pump them. This got my attention, so I cooked up a deck. Here's the version I've been tooling with online. It could use some work, but my heart nearly burst out of my chest with excitement when I actually connected with a Cephalid Constable enhance by both Wings of Velis Vel and Briarhorn. Of course, I was so excited that I clicked right through the Constable's triggered ability and only got seven damage, rather than a one-sided Upheaval, out of the deal. There are many, many directions you can take this deck, but maybe I will get into those at a later date.


Once again, if you are in the Chicago area over the weekend and you wish to play Magic, trade cards or get them signed by the artists who painted them, or do battle with Richard Garfield (!!!) at the gunslinging tables, stop by. It'll be awesome, I swear.

Until next time, have fun, will travel!