Posted in Competitive Gaming on November 12, 2014

Last November, Washington DC played host to a Legacy Grand Prix that featured 1,698 players and a host of Brainstorms, fetch lands, original dual lands, creatures ranging from the small but powerful to the towering and limitless, enchantments, artifacts, Planeswalkers, and a tribal strategy or two (and likely more).

As of Monday morning, the confirmed preregistration for North America's next Legacy Grand Prix, taking place in New Jersey this weekend, reached 2,230.

Just let that sink in for a minute.

With event and judge staffs that rival and even exceed the numbers of the record-shattering Grand Prix Las Vegas, Grand Prix New Jersey is well on its way to having its own place in history as the world's largest Legacy tournament.

But let's not get ahead of ourselves here. First up...

What is the happy medium between Brainstorms, Mother of Runes, Show and Tells, etc., and khans, gods, and the occasional Nissa or four?

All of those are correct. But if you want to get specific, let's tweak that question a bit.

What's the happy medium between Legacy and Standard?

Why that would be Modern, of course! And Grand Prix Madrid will be Modern's first big opportunity to shine since the release of Khans of Tarkir.

Modern is oftentimes known as the format where one player expects only minor shifts in the format to take place with each set release, and where one can master a deck archetype over a span of months. We've seen this at both the Grand Prix-level and the Pro Tour-level. Players like Sam Pardee and Jacob Wilson championed Melira Pod at each and every event, adjusting for the current week's expected metagame. Players like Patrick Dickmann championed Splinter Twin, shifting the deck to meet whatever challenges that were expected for each specific event.

Khans of Tarkir, if you have been following every other Constructed format, is not a set known for the small shifts it causes. It's known instead for causing big, seismic disturbances, even in formats such as Vintage.

Modern has been the talk of many, and a few new tools from the new set are expected to shake up the format. Namely, tools such as Jeskai Ascendancy, Treasure Cruise, and Dig Through Time. Will these three cards change everything...or will their illustrious entrances be calm?

Players traveling to Madrid will find out this weekend.

The first 1,000 players to arrive at the venue and present their preregistration email will receive an event-exclusive playmat featuring artwork from Svetlin Velinov (who will also be at Madrid this weekend). 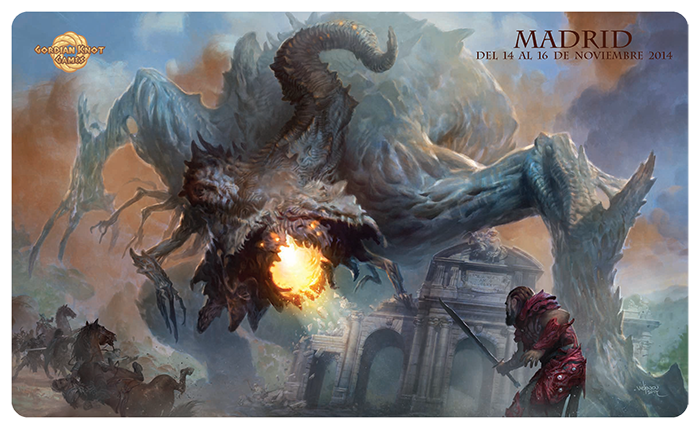 Meanwhile, while Modern gets its big weekend...

Legacy will also be getting its time in the spotlight! Returning to that key point about this weekend's Legacy action.

As of Monday, 2,230 people have preregistered for the GP. That was two days ago. The number has only grown since then. Now, what are all of those players who plan on spending two days in New Jersey for Legacy going to get?

Well, this, for starters. 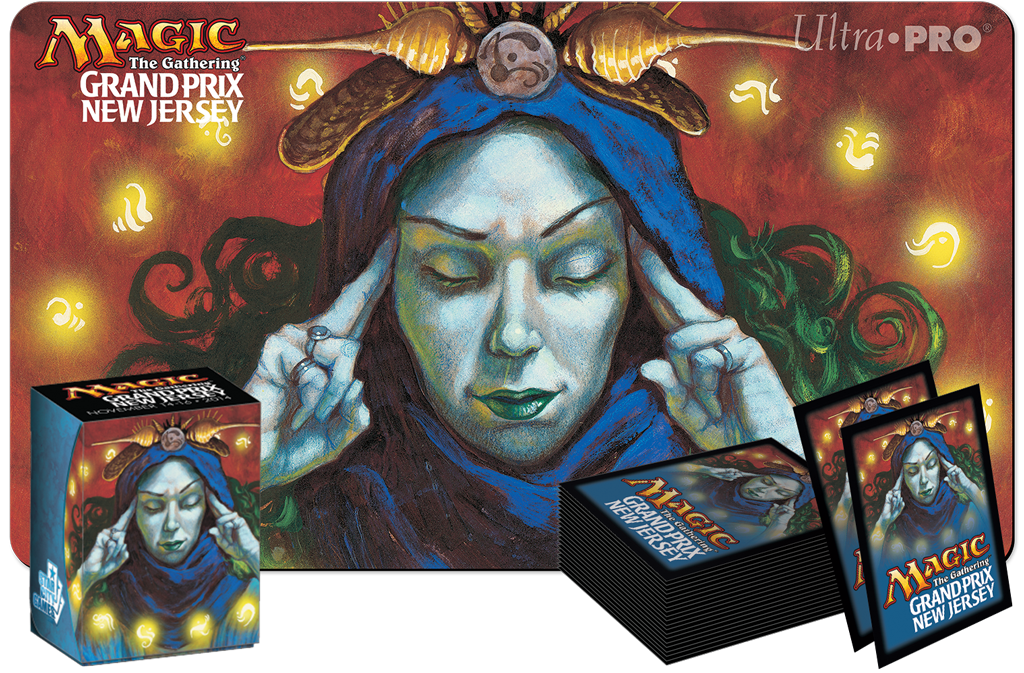 These Grand Prix New Jersey goodies are available to every player who plays in the main event!

Brainstorm and Legacy go hand-in-hand. The format-defining glue that holds many of Legacy's iconic decks together is the highlight in the event-exclusive playmat that will be given to every main-event participant.

But that's not all. Every main-event participant will also receive a deck box and an 80-count pack of sleeves that also show off the iconic Brainstorm art from its release in Mercadian Masques.

Looking to get some more of those Brainstorm sleeves? StarCityGames.com is also giving away packs of these sweet sleeves as prizes for anyone who wins a side event during the weekend. They're also guaranteed to anyone who enters a Khans of TarkirSealed Spectacular on Friday.

In addition to that, Grand Prix New Jersey is also extending a big welcome to the event's guest of honor, John Avon, one of Magic's most celebrated artists. Known for his wide collection and variety of art in the game, ranging from the broad cityscapes of Ravnica's bounce-lands like Dimir Aqueduct, to the widely popular basic lands from Unhinged, and everything in between, Avon's work has spanned multiple generations of Magic. Grand Prix New Jersey will provide a special opportunity to not only meet him, but also to get some of your cards signed by him.

Full details—including the complete list of side events taking place—can be found over on the Grand Prix New Jersey web site.

If you're unable to attend New Jersey for the Grand Prix, you can still get in on some of the action at home. Live coverage of the Grand Prix will be found on the SCGLive Twitch channel featuring Cedric Phillips, Patrick Sullivan, Matthias Hunt, and the rest of the SCGLive team.

Looking beyond even this weekend...

We're less than three weeks away from the start of the 2014 World Championship, which begins an epic week with five days of coverage featuring the best Magic that you can watch all year.

Leading up to the World Championship, Organized Play Community Manager Nate Price and I have been highlighting each of the 24 competitors you'll see at the World Championship in Nice, France, this December. You can find a list of all published player profiles below. Be sure to check back to the Events page here on the Magic web site each weekday to see a new profile!

The road to Worlds Week is nearing its end, but we're not at Nice yet. Be sure to tune in to both the Madrid and New Jersey coverage this weekend if you're unable to make it out to both events!

Posted in Competitive Gaming on November 12, 2014