Posted in Competitive Gaming on October 22, 2014

In case you enjoy week after week of Magic to watch on weekends, I have some good news for you.

This weekend, we're moving into our third week in a row of Magic content on Twitch, but it's just one of many things going on during both October and November. In fact, things aren't slowing down at all as we build up to the big events of the year: the World Magic Cup and the 2014 World Championship, both taking place during in beautiful Nice, France starting December 2.

But that's a few weeks away out. Here's what we've got lined up between then and now:

Oh, and to top all of that off, the weekend of the 2014 World Magic Cup and World Championship marks the begin of two very important things for those of you looking to battle on the Pro Tour main stage:

That's a lot to think about. So let's narrow that list down to the current stuff coming up. Namely, the GPs taking place in October (this weekend and next weekend).

The Standard format continues to be the central focus this weekend, as players get ready to compete in Stockholm, Sweden for their share of the minimum $35,000 prize purse and—of course—the Grand Prix trophy. Grand Prix Stockholm will be following up both Pro Tour Khans of Tarkir as well as GP Los Angeles, where we've seen the Standard environment change quickly from one week to the other. Will old standbys—R/G Monsters and Mono-Red Aggro—meet in the finals once more, or will Jeskai players get their vengeance from LA and see a surge in the Top 8?

The first 800 players to register for the main event (either preregistering online or registering on-site Friday) will receive this event-exclusive playmat! 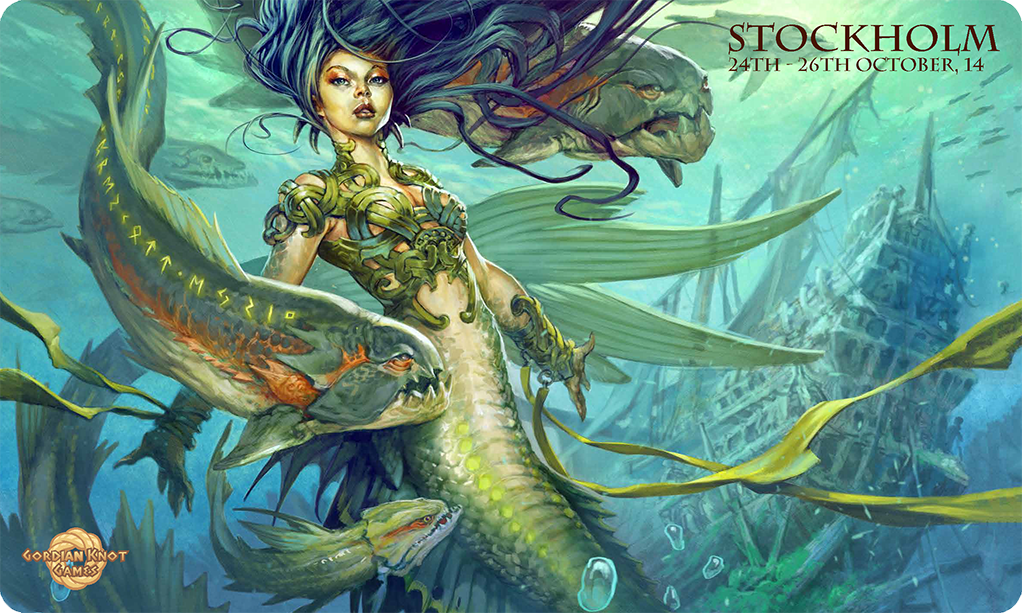 Of course, if the main event doesn't go well for you, there are plenty of things to do beyond that. The Super Sunday Series is a regular standout, but Sunday offers plenty more options highlighting large schedule events in every competitive Constructed format (including Legacy and Vintage) so there's something for everyone!

And in the event that you can't make it to Stockholm this weekend, you can catch all the main event Standard coverage on the Magic Twitch channel starting Saturday at 1 p.m. Magic video coverage this weekend will be hosted by Rich Hagon, Tim Willoughby, Marijn Lybaert, Simon Görtzen, and Steven Leeming. Floor reporters Tobi Henke and Hall of Famer Frank Karsten will be bringing you all the latest developments from the tournament floor on the text side.

Grand Prix Santiago will continue this global tour and evolution of the new Standard format in Chile the week after Stockholm. Coverage reporter mainstay Josh Bennett will be joined by Rich "What's this text coverage thing again?" Hagon as they bring you all the latest reports, stories, and Standard goodness from what is sure to be a great time for every player in attendance.

And all players who registered prior to October 1 for this event (along with all VIPs) will be receiving this event-exclusive playmat. While players battle it out in Standard in South America, teams of three will be traveling to Nashville, Tennessee to compete in what is sure to be an incredibly interesting weekend highlighting the Khans of Tarkir Team Sealed format.

Aside from this showing off the power of some incredibly honed Team Sealed decks featuring the new set, these events tend to be a brilliant display of powerhouse teams, such as the Peach Garden Oath of No. 1 Owen Turtenwald, No. 4 Reid Duke, and No. 9 William Jensen, winners of our last Team Limited Grand Prix.

The teams of three will also receive one each of three playmats offered in Nashville. Who gets which one is up to the team to decide! Oh, and if you see any tall, dark-cloaked necromancers walking around, that's probably because Nate Holt and Shawn Kornhauser of Walking the Planes will be in Nashville filming an episode of their popular web series. So uh…try not to make the necromancer mad. His magic is a tad nasty.

Two weeks, three big events, lots more on the way. We may be in the last quarter of 2014, but there's still plenty of Magic to take part in.

Last weekend, Grand Prix Los Angeles continued the evolution of the Standard format. While Abzan and Jeskai were expected to make big showings during the weekend, only Abzan that was able to put up the Top 8 numbers, as Jeskai players fell flat in the final rounds of the event.

However, the story is about far more than those two clans. For example, the finals contained no Khans of Tarkir clans at all! While Denis Ulanov sported Mono-Red Aggro through to the finals, it was ultimately Oakland resident Daniel Scheid who was able to lock up his championship win with the blast from the past deck archetype Red-Green Monsters. Scheid, whose only notable finishes prior to Los Angeles was touted by him as "2nd place at several FNMs", got to take home a really awesome souvenir in the form of the GP Los Angeles trophy.

Full coverage of the event can be found here, but a couple of notable highlights are:

The "Other" Clans—Marc Calderaro was in pursuit of players who were raising the banners of clans that weren't of the Jeskai Way or the Abzan Houses. And in his pursuit of people piloting decks belonging to Temur, Mardu, and Sultai, he found a Hall of Famer and some Grand Prix champions along the way. Deck Tech: Enchantress with Floch—Frank Karsten found a few big names piloting a deck that warranted their callback to Enchantresses of old that meshes the best of black and green together. See what No. 5 Ivan Floch and No. 10 Stanislav Cifka brought to GP Los Angeles in his extensive Deck Tech piece!

Posted in Competitive Gaming on October 22, 2014