the second set of the Time Spiral Block, Magic is gonna give players new cards… by giving them cards they already know. Confused? Be glad you’re not Teferi and his crew! But here’s more explanation for you non-Dominarians: Planar Chaos will shake things up by putting a twist on familiar elements and settings. All the weirdness you’ve come to expect with Time Spiral is ratcheted up in this new set. Once again, new players will get a taste of the past, while veterans will have the chance to remember old favorites – but it won’t be quite as simple as reprints this time. Prepare to have all your preconceptions seriously tested! 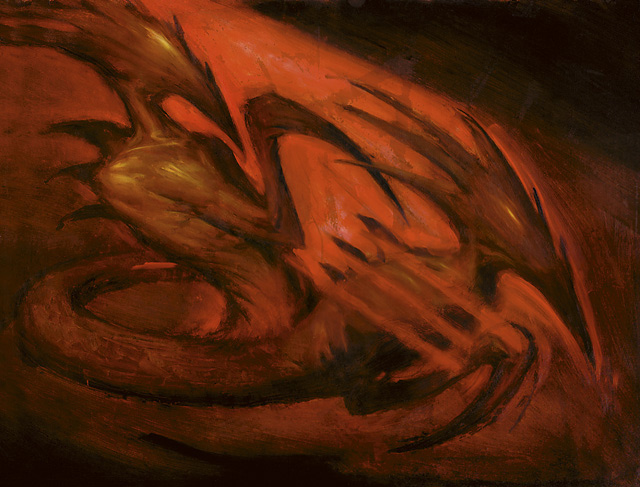 In keeping with the time-based themes of this block, Planar Chaos deals with the present, much as Time Spiral took a look at the past. One way it looks at the present is a mainstay of science fiction and fantasy: alternate realities. You’ve probably seen examples before in literature, movies, and TV – What if the Confederacy won the American Civil War? What would have happened to the United States if John F. Kennedy had never been assassinated? How would Star Wars have ended if Luke had failed to destroy the Death Star on that dramatic run? It’s fun to ask “what if,” and with the time rifts around, Magic is able to do that in spades.

You already got a taste of what’s in store in the New Year’s Day preview, and Mark Rosewater explains more about the new weirdness, but here’s the rundown. The “timeshifted” cards of Time Spiral represented reprints from the game’s past, but the timeshifted cards in Planar Chaos represent cards that are entirely new, yet unnervingly familiar. Not only do those nasty rifts pierce time and space, but dimensions as well. People, places, and things that never existed (and maybe should never have existed) in the multiverse we know and love are brought to full life in Dominaria. What if famous characters of the past had been aligned with different colors? What if key events in the Magic storyline had gone another way? What if Richard Garfield or past R&D teams had made different decisions about where certain iconic cards and abilities belonged in what we now know as the color pie? The timeshifted cards will answer these questions and more. Add in the “normal” cards, which also present a twist on the Magic we know and love, and there’s some serious head games going on!

Another way Planar Chaos works in the theme of the “present” is, of course, through examining the present state of Dominaria. But even there, the time rifts and alternate realities come into play. Dominaria is still in a state of ever-changing chaos because of the temporal insanity, and that’s affecting everyone and everything still living on the plane. New creatures with strange new powers rise out of the ashes of the old. The stability of matter itself begins to break down. The ranks of the slivers grow even more. As with the timeshifted cards, expect to find figures and spells that put a new twist on beloved old standbys. 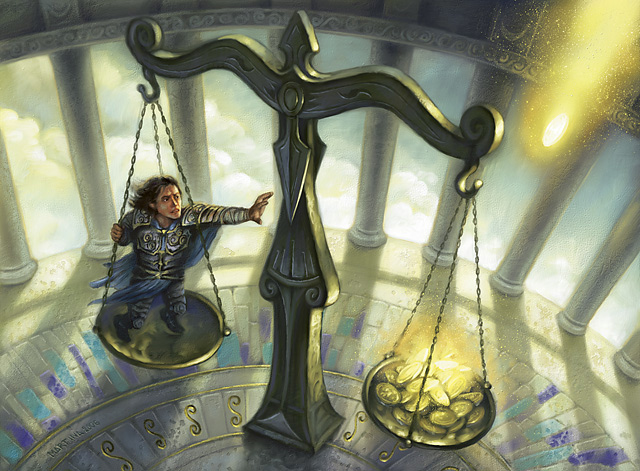 As usual, all of this is developed further in the novel, written by Scott McGough, with major assistance from Timothy Sanders, one of two new writers discovered through an open writer’s call a couple of years ago. Having survived the danger they were placed in at the end of the Time Spiral novel, ex-planeswalker Teferi and his crew struggle to bring the planet into some semblance of order. The Urborg artificer Venser, who now possesses incredible new powers, joins this struggle, along with a few other names that echo the past. However, these echoes reverberate throughout the multiverse, sometimes returning to listening ears with a sinister tone. Not all memories are happy ones, a reminder that some characters will remember the hard way.

A time rift introduces Teferi and friends to a dark alternate reality, one cloaked with shadow and overrun by more than one well-known evil. Even if they escape with their lives, these forces will become a threat to their home universe. Several characters have already paid dearly to preserve Dominaria, and even more sacrifice will be required to keep another world from falling to the same fate as the alternate reality. If Teferi and the others want to put things right, they’ll have to meddle with time and space even more, in one last desperate push to stabilize reality. If they fail, the destruction of Dominaria will be the least of their concerns.

And now, it’s time for the preview card. Even though it’s not technically a timeshifted card, it’s definitely from an alternate universe, so I thought I’d first set the stage by showing you a little scene from the timeline this card came from – the point at which events diverged from the version we know today… 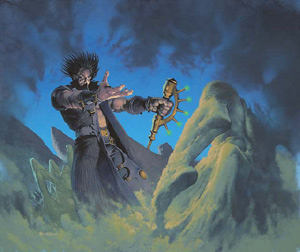 Ixidor was alone now. Banished into the wastes by the Cabal for his failure in the pit fights, he didn’t even have the strength for tears. He had lost everything: his money, his dreams, and most painfully of all, his one love, Nivea, slain at the hands of the cruel Phage. All that was left was himself, his thoughts, and the infinite seas of sand.

He didn’t know how long he lay there, unmoving. He wasn’t conscious of the movement of the sun, the passing of time. His thoughts and consciousness seemed to flicker out, then renew themselves, more than once. All he knew throughout was his pain. And as an artist, he knew only one way to let out pain: creation.

As he gathered his strength and began his work, he already knew something was different this time. There was his renewed strength, for one. There was also the brightness of the images in his mind, red-hot and flaring, alive almost from the moment he conceived them. But most of all, there was the rage, burnt into every inch of his being. Rage against the Cabal, against the fates, and especially against Phage…. His limbs moved with almost supernatural speed, twitching and shivering with the pent-up anger animating his once frail form. He could feel a scream well up inside him, a scream that encompassed all of this heat inside him, but no sound would be sufficient. He worked, faster and faster, sweat running down his face, almost blinding. He pushed that scream into his arms, his hands, his fingertips, as they pushed and prodded at the very fabric of reality. He pushed and pushed until the scream began to ring in his ears, at first soft, but increasing in volume and pitch until it threatened to shut out the rest of the world and leave him deaf, forever leaving that cry echoing through his brain.

A wisp of heat tickled his face, and he looked up. The scream was real, all right, and it was coming from the throat of the figure floating before him, a figure that had not been there moments before, framed by the setting sun. She was beautiful, glorious, her face twisted in a frenzied anger, her every muscle bursting with that glorious rage, dying to release it all on a wicked world.

Then came her first words, ringing clear and hot. “What do you want me to destroy first, my maker? 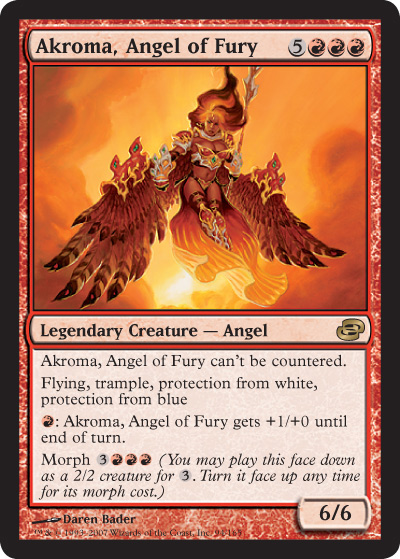 I’ve seen a lot of speculation on message boards about whether the voting results of You Decide made any difference. Sure, some people said, Akroma was voted top Legendary creature, and Akroma was reprinted as a timeshifted card, but maybe those sneaky R&D guys were planning on doing it anyway! Is this an answer to that speculation? Only time (heh) will tell.

For those of you who saw Akroma in her original form in Time Spiral and wondered who she was, here’s a quick refresher: Her story began in the pit fights run by the brutal Cabal. Ixidor and Nivea were among the many souls who tried to eke out a living on the continent of Otaria by fighting in them, wagering on themselves and making their names. This worked well until they faced Phage. She killed Nivea and defeated Ixidor. Unable to cover his debts, Ixidor was left by the Cabal to die in a vast expanse of desert. There he gained the ability to make his artistic creations come to life. The most powerful of these creations was an angel with the face of the late Nivea, an angel who lived only to protect her creator and destroy Phage. This angel was, of course, Akroma. But in this alternate reality, Ixidor (who is blue-aligned in “our” universe) was steeped in rage, and thus created an angel whose abilities followed suit. 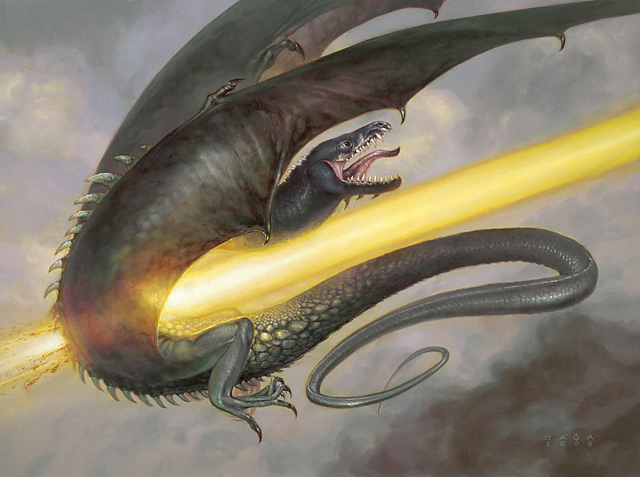 In any universe, Akroma has to be big and bad, and the Angel of Fury is definitely both. Just as the original Akroma was a favorite target for reanimation spells, this version can also come into play early through its morph ability. But even if you do decide to just play it from your hand, you can do it without fear of her being countered. Once in play, she is immune from cards such as Pacifism and Unsummon, and her attacks become even deadlier with her “firebreathing” ability! Akroma is immediately recognizable yet totally different from her “real” incarnation, making her a perfect example of the alternate reality strangeness of Planar Chaos.

Our visit to Dominaria, and perhaps Dominaria itself, is nearing its end, but there are still a lot of new and exciting discoveries in store. What sort of new stories and possibilities will come out of the unexplored universes of Planar Chaos? I think you’ll enjoy discovering it all. Until next time, consider the ultimate question: What if…?

Where to Find Time Spiral Remastered Previews by, Wizards of the Coast

Time Spiral Remastered previews are upon us! To help our readers and preview seekers, we've created this handy guide to preview season. This page will help you follow along with everythi...

The First Lesson: Introduction to Strixhaven by, Blake Rasmussen

Welcome, students! In just a few weeks, class will be in session at the prestigious Strixhaven: School of Mages, and we're so glad you've chosen to begin your mystical studies with us! Y...