Posted in Competitive Gaming on November 28, 2017

The year 2017 isn't done yet, as we have a few more Grand Prix and one big event remaining before we ring in 2018. The World Magic Cup is the next event on deck, and starting on Friday, December 1, you'll be able to tune in to see which of the 73 countries will have its representatives hoisting trophies by the end of the weekend.

Here's the important need-to-know details about the 2017 World Magic Cup:

The World Magic Cup is definitely our most unique event of the year, featuring a different tournament structure and Pro Tour regulars as well as aspiring competitors playing alongside each other to ensure their country emerges victorious.

Day One of the 2017 World Magic Cup begins Friday at 10 a.m. local time, and then Day Two and the Top 8 begin Saturday and Sunday at 9 a.m. local time. The event is taking place in beautiful Nice, France, so that means the following, depending on your time zone:

Can't watch the broadcast live on twitch.tv/magic? Never fear! We will replay the broadcast after each day concludes, and you can find Videos on Demand (VODs) of each day on our Twitch channel.

Who's calling the World Magic Cup? What about writers? Photographer? Here's the breakdown.

Round-by-round content, decklists, articles, pairings, results, and standings can all be found on our 2017 World Magic Cup coverage page, so bookmark that one for all the latest throughout the weekend.

For this event, Team Unified Standard and the 73 teams in total means that there's only 219 Standard Constructed decklists to account for. So y'know what? We're just going to publish all of them by the end of the weekend.

You'll be able to find all 219 Team Unified Standard decklists on the coverage page Sunday, once the Top 8 is in progress.

If you're unable to tune in to live video and still want to keep up on what's happening, be sure to give @MagicProTour a follow on Twitter, as our social media team will be posting updates and content there all weekend. You can also join in on the conversation using the hashtag #MTGWMC. You can even be part of the coverage, as the content wall on our coverage page will sometimes feature community posts!

Chinese Taipei, France, Denmark, Italy, Greece. Five countries have won the World Magic Cup thus far. Will it be one of them again, or will a new country emerge as the winner? Tune in to twitch.tv/magic to see it all live.

First up is this doozy. 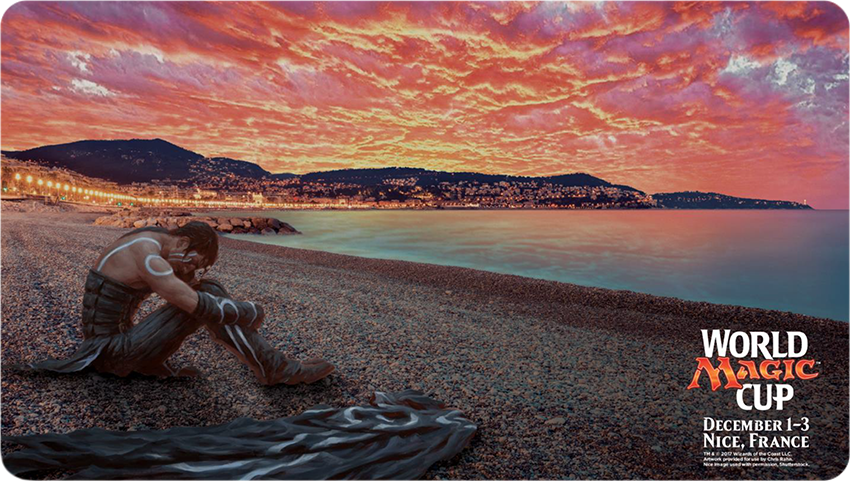 This playmat will be for sale at the venue for the World Magic Cup in Nice, France, and is an event exclusive featuring sad Jace on . . . uh, a beautiful Mediterranean beach. While Jace might be sad, competitors looking for a cool memento of their weekend won't be, as they can pick one up at the merch booth at the World Magic Cup tournament venue, and they might just snag a look at the beautiful beach sunset in Nice if they're fortunate.

Finally, we have some updates from the most recent Regional Pro Tour Qualifier (RPTQ) round. The latest round qualified successful players for Pro Tour Rivals of Ixalan, which takes place February 2–4 in Bilbao, Spain.

First up is the attendance from each of the latest round's RPTQs.

And here are the Top 8 decklists we've collected, showcasing all kinds of Modern!

Posted in Competitive Gaming on November 28, 2017