Posted in Competitive Gaming on October 26, 2017

Scott Larabee started at Wizards of the Coast in 1998, having organized premier Magic tournaments since 1996. He is currently the E-Sports and Premier Play Programs Design Manager. He enjoys Commander and board games.
Share Article
Share Tweet Share

Editor’s Note: The 2018 GP schedule in this article was updated following an announcement on December 11, 2017. The format for GP Phoenix is now Modern, and GP Providence now takes place on August 17-19 with a main event format of Standard.

Additionally, the date for Grand Prix Melbourne was updated after this announcement, and the venues for Melbourne and Nagoya were updated. For more details on these changes, please refer to this posting.

I may be looking forward to the 2018 Grand Prix season more than any year before it, and not just because you can fight Dinosaurs with Pirates flying through the air like magical trapeze artists. Rather, I'm looking forward to changes being made to Grand Prix and other tournaments that will ensure these marquee events are more enjoyable than ever.

You can jump to any section below for the details:

Changes to Swiss Rounds and the Day Two Cut

Starting with Grand Prix Santa Clara in January 2018, the number of rounds on Day One of a Grand Prix is changing, as is the cut to make Day Two.

One area of consistent feedback over the last few years has been where to make the Day Two cut. In the not-too-distant past, only players who finished Day One at 7-2 or better moved on to Day Two—essentially everyone who was live to make the Top 8. That was shifted to 6-3 as Grand Prix continued to grow in size so that players could still win out and win some prizes, or even a Pro Tour Qualification. Both cuts had their issues, but with no win-loss record between 7-2 and 6-3 (ties notwithstanding), there wasn't much wiggle room.

Working with CFB, we believe we've hit on a solution to help address the issue. Starting in 2018, all individual Constructed events will be eight rounds on Day One and seven rounds on Day Two, with the cut coming at 6-2 or better.

For Team Grand Prix, Day One will also be eight rounds with a cut at 6-2, with six rounds played on Day Two before the Top 4.

For individual Limited events, the Day Two drafts make things a touch tricky, but we're going to try a hybrid solution. Day One will continue to be nine rounds played with Sealed decks. However, there will be a cut after Round 8, and all players not at 6-2 or better will be eliminated. All remaining players will then play Round 9 with their Sealed deck, and all will be invited back for Day Two.

The result, we believe, will help make days shorter all while finding that happy medium between the 7-2 and 6-3 cuts of yesteryear.

But where, you might wonder, will you be able to partake in one of these Grand Prix? Excellent question.

The first half of the 2018 Grand Prix schedule was revealed in July. Today—right here and right now, in fact—we are revealing the rest of the schedule, as well as the Grand Prix participation promo card: Mutavault, with art by John Avon! 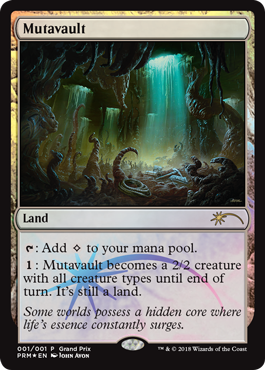 You can pick up your Mutavault copies starting with the first Grand Prix of 2018. We will be moving to a yearly schedule for Grand Prix promos, as seasons were a touch confusing for players. That means we will continue distributing the Progenitus Grand Prix promo through the end of December.

Below you can find the full Grand Prix schedule for 2018. Each event listed will use the new Day One cut system. Everything below Grand Prix Barcelona is new!

Tweaks are also being made to the Sunday Pro Tour Qualifiers run at Grand Prix in 2018, mostly to provide a smoother experience for players transitioning from the main event to the PTQ.

All Sunday PTQs will use the format that was featured as the individual main event's format (more on team events in a moment). Yes, this includes Legacy Grand Prix, which will now feature Legacy PTQs on Sundays. Double-Grand Prix weekends will feature two PTQs, one for each format.

As Grand Prix grow, so do Regional Pro Tour Qualifiers, leading to a need to adjust their invite scales. Therefore, starting with the RPTQs that feed Pro Tour Dominaria (taking place in early 2018), Pro Tour invites will be given out based on the following attendance:

Last, but certainly not least, merely attending one of the RPTQs feeding Pro Tour Dominaria will get you one of these beauties—Noble Hierarch with new art by Matt Stewart! 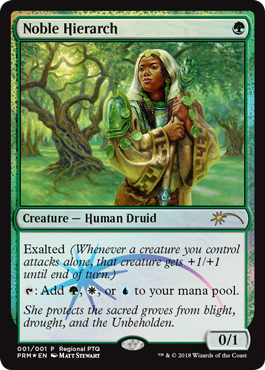 Posted in Competitive Gaming on October 26, 2017