Posted in Competitive Gaming on October 23, 2017

After more than five years, Nationals has returned. The absence of the once-staple tournament was a hole in the tournament world, and one that players have asked to be filled for years.

Finally, in Richmond, Virginia, it's back. More than 600 players arrive to do battle and knock off the game's longest-running National Champion by default, Ali Aintrazi, who won the previous US Nationals tournament (held in 2011). Four rounds of Standard, three rounds of Ixalan Draft, and then run it back the next day. Those left standing when the cut to Top 8 happens are ecstatic as they begin to play some more Magic.

But this isn't like a Grand Prix, where everyone is happy having earned something simply by advancing to the Top 8. No, in this tournament the real test is just beginning, and everyone knows what's on the line. The field of eight is stacked with the best of the best; 2015 Magic World Champion Seth Manfield is here, as are Pro Tour Amonkhet Champion Gerry Thompson and Pro Tour Magic Origins Top 8 competitor Stephen Neal. Everyone else knows they're fighting an uphill battle.

The Top 8 commences, and when Manfield takes a loss in the quarterfinals, everyone left breathes a little easier. The Top 4 begins, and with it comes the real battle—the winners of these two matches will take their places on the national team alongside captain Reid Duke. Thompson locks up his spot with a decisive victory and immediately stands up and embraces Duke, who has been anxiously watching the gameplay, the most invested spectator in the room. Thompson describes himself as "unreasonably excited" when he earns his roster spot, and all that's left is to find out who the final US team member will be.

It's Oliver Tomajko or Peter Villarrubia. One is the typical Magic player, balancing work and life and friends and Magic. The other is Tomajko, a seventeen-year-old high school senior whose days are mostly filled with college applications and trying to figure out exactly what he wants to do with his life. Tomajko is playing the Blue-Black Control deck that Josh "Wrapter" Utter-Leyton debuted at the World Championship a week prior, while Villarrubia is favored in the matchup with his White-Blue Approach of the Second Sun deck. It's a mismatch on more than just paper—Tomajko, after all, is trying to accomplish something that's never been done before. If he wins, he'll be the youngest player ever to do so, beating a record previously set by Matt Linde in 1998, years before Tomajko was even born.

The match drags on as control-vs-control matches do, eventually progressing to a final deciding game. Through the card selection provided by Search for Azcanta and later the card advantage provided by its flip side, Azcanta, the Sunken Ruin, Tomajko finds himself in a favorable spot, and Villarrubia goes digging with a desperation Glimmer of Genius. When his search comes up empty, he extends his hand and congratulates Tomajko on making the US National team.

His friends are behind him, applauding and waiting to embrace the winner. The photographer is on the prowl, hoping to catch that moment when the kid lets loose. Duke looks on quietly, silently approving of his newest teammate. If there were ever a time to show the emotion Magic players typically shy away from during the game, now is that time, and everyone knows it. 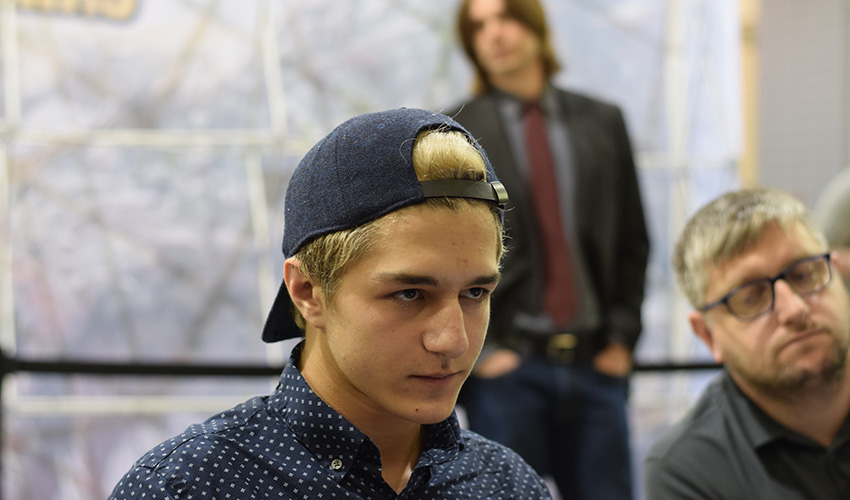 And Tomajko? Well, he calmly thanks his opponent for the games, picks his cards up, and begins to de-sideboard. There's no exuberance, no cheering, no fist-pumping. A smile never cracks his face.

After all, there's still work to do.

And work is exactly what Tomajko does—working over Thompson in the finals, anyway. He takes down Thompson's Temur Energy deck in three games, and in doing so becomes the youngest National Champion in US history. Even after getting the full treatment—interview on camera, a photo shoot with the trophy, even a big novelty check for good measure—it's hard to pull a smile from the seventeen-year-old wunderkind.

The iceman came, the iceman conquered, and he did it without so much as a shout.

After all, next up is the World Magic Cup, just a few short months away in Nice, France. And there's still so much work to do.

Tomajko wasn't even playing Magic when Ali Aintrazi won the last US Nationals tournament, but he's come a long way since his unassuming start back in Gatecrash. Tomajko had previous experience with card games, and he was a quick study. Before long, players began to know just who the quiet kid with all the good decks was.

Not that anything could stop the assumptions that came with his age.

"I remember one time when I was ten, a guy came up and told his friend that it would be really embarrassing if he lost to a little kid, and told me if I beat him he'd give me any card out of his binder; obviously I won the match," Tomajko recalls with satisfaction. "I don't really say much about it when stuff like that happens, I just play and don't worry about the rest."

Little did his opponents know who really sat on the other side of the table. Tomajko wasn't just any other kid learning to play Magic at their local game store—he's a former high-level champion at other card games and became the youngest StarCityGames.com Open Series winner when he took down SCG Providence in 2015. He followed that up with a Top 8 appearance at Grand Prix Portland a year ago, and well before his eighteenth birthday he had accomplished what many Magic players spend their whole lives chasing: a shot at the Pro Tour.

Playing Magic at a high level is difficult for anyone to manage. When that someone isn't old enough to book a hotel room and still needs approval from their parent or guardian on most waiver forms, the difficulty is further compounded. Fortunately for the Westchester native, his family is supportive of his hobby, helping to book rooms and flights when necessary and allowing him time to practice on Magic Online (except, Tomajko notes with a nudge, sometimes when his mom is angry with him). And while his eleven-year-old brother isn't tagging along—"He likes sports," Tomajko sighs with an audible note of disappointment—Tomajko considers himself lucky to have a family that gives him the opportunity to play the game he loves. They were all glued to Twitch over the tournament to watch their son and brother become the game's youngest National Champion.

Tomajko knows that age is no excuse—Magic is Magic, after all—and as he joins the best in the world in Duke and Thompson to face superteams like Japan's Yuuya Watanabe, Shota Yasooka, and Kenta Harane and Brazil's dream lineup of Paulo Vitor Damo da Rosa, Lucas Esper Berthoud, and Carlos Romão for the World Magic Cup, Tomajko is again ready to race past all expectations.

"I know I'm gonna be the newbie, but I'm going to do my best to help the team, and hopefully I'm not too shy," he says as he looks forward to his new team and their shared goal. "It's pretty sick to know I get to test with them and be on the team. It's going to be a great time, and I want to make sure I don't mess up."

There's one more thing you should know about Tomajko, one you'd never guess from watching him coolly take down the best the country had to offer on his way to being crowned National Champion.

That whole iceman image isn't him at all.

"I know I didn't show much while I was playing, but inside it was nerve-wracking," he reveals sheepishly. "I've been playing card games since I was ten, and naturally I'm just quiet. At school teachers think I'm not engaged because I look grumpy all the time, but really I'm not like [that]. I'm spontaneous and energetic!" 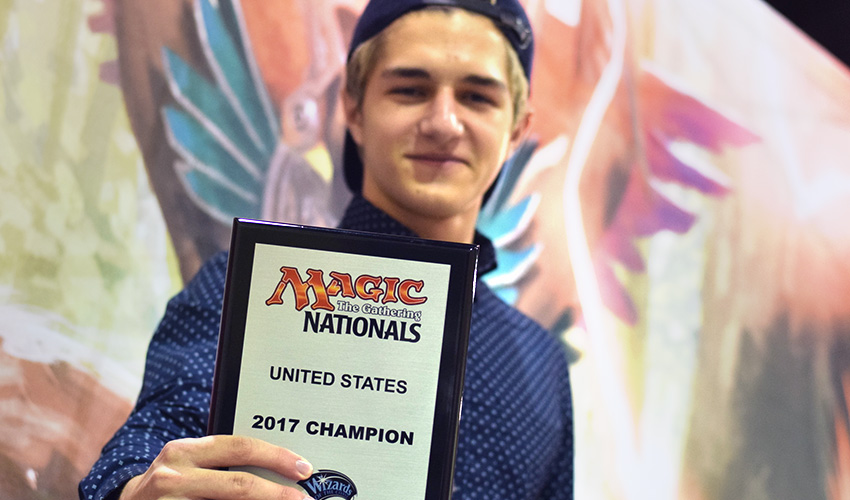 Posted in Competitive Gaming on October 23, 2017