Posted in Competitive Gaming on January 11, 2018

Buckle up, because after a few weeks of hiatus and with a new year ahead of us, today's edition of Organized Play is packed with all sorts of stuff that'll interest you, including playmats, coverage deets, Eternal Weekend news, and some 2017–18 Team Series roster additions and updates.

All Sorts of Premier Event Goodness

We've got some coverage details regarding Grand Prix and the Pro Tour over the next few weeks, as well as a host of playmats and sweet stuff you can get at GPs through mid-April.

For GP playmats, there are multiple ways you can get them:

Check out the event information pages for each GP for the specifics on how to get a GP's event-exclusive playmat.

Our next Grand Prix weekend takes place in Indianapolis January 19–21, showcasing Team Limited using the brand-new Rivals of Ixalan across two days. This event, like other team Grand Prix main events from January through May, qualifies players for Pro Tour 25th Anniversary August 3–5.

We'll be bringing you live coverage both days on twitch.tv/magic. The coverage team and start times are as follows:

The event-exclusive playmat for GP Indianapolis is . . . well, hold that thought. It's actually plural. Indy's a team event, and players who register for the main event may opt in to a bonus package to choose one of the following three playmats (while supplies last): 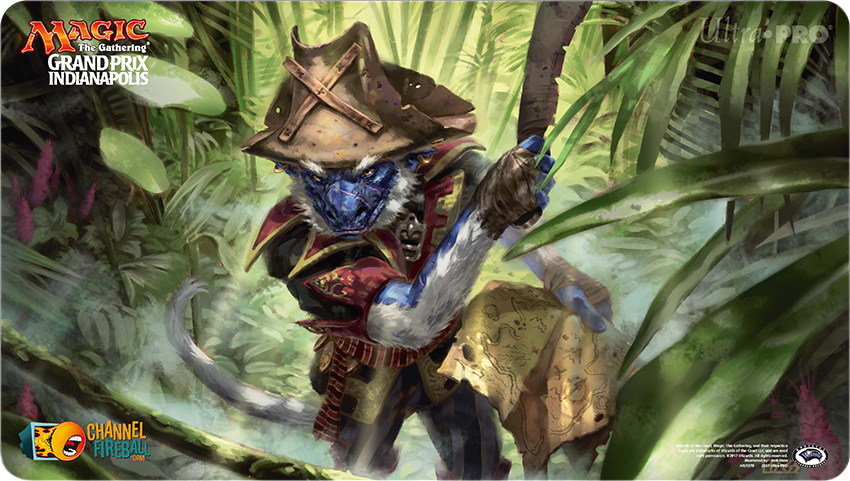 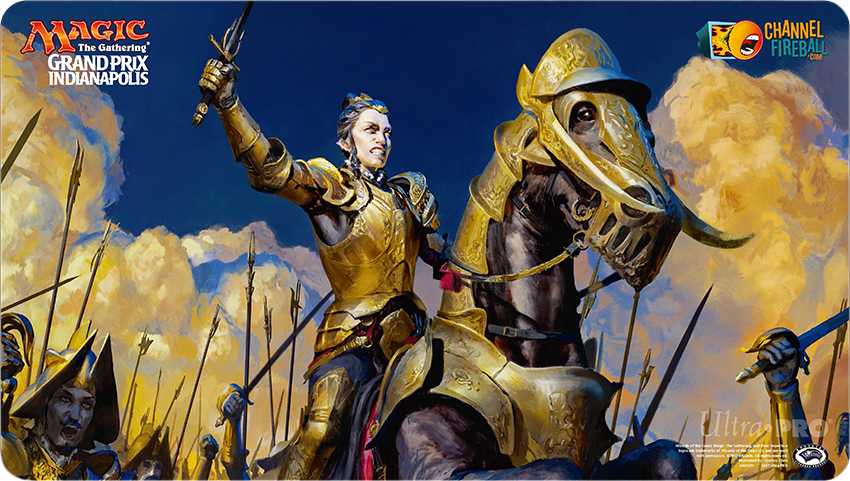 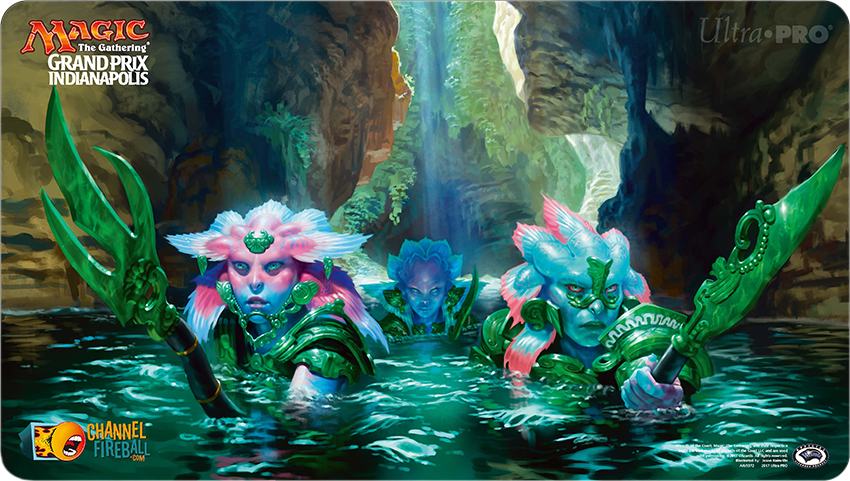 January 26–28 is a double-GP weekend featuring individual Rivals of Ixalan Limited main events in London and Houston. London is getting the live video coverage treatment that weekend.

The playmat for GP London and Houston showcases artwork from the card Champion of Dusk (art by Josh Hass). 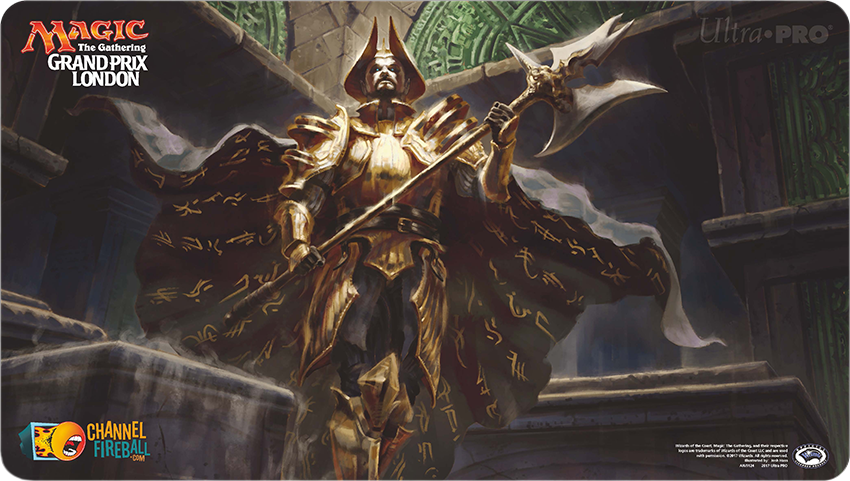 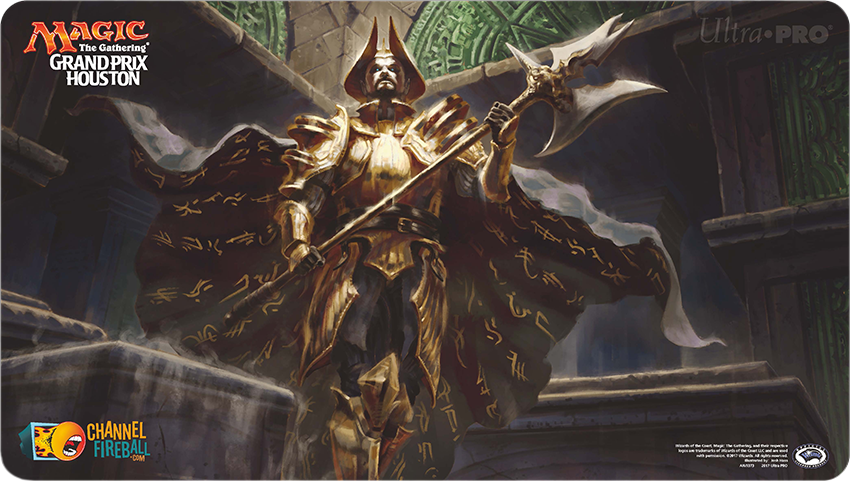 The coverage team for the Pro Tour features our mainstay PT coverage crew:

Players and locals who stop by can also pick up the exclusive Pro Tour playmat, featuring the usual mesh of plane and city with Huatli riding a dino and a beautiful view of Bilbao, Spain.

Want a little more Modern? Grand Prix Toronto will deliver on that February 9–11, as players bring their best Modern decks to compete in the two-day main event. 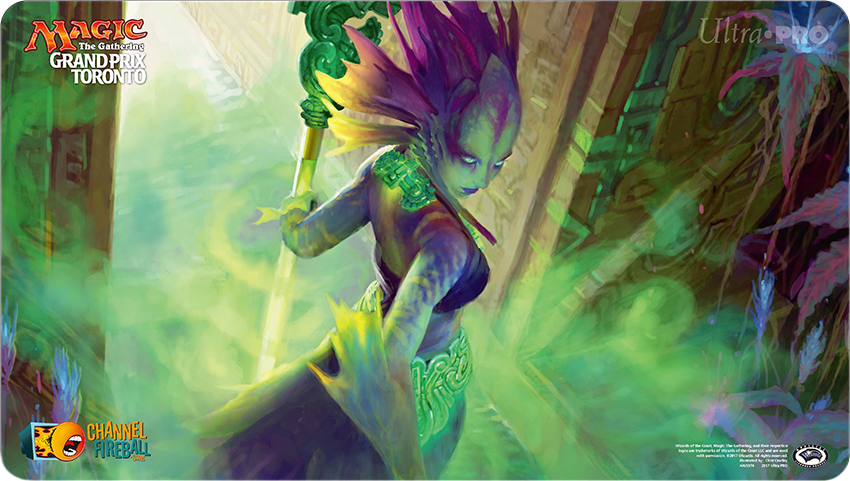 After North America gets its shot at Modern, GP Lyon brings the action back to Europe February 16–18 for another two-day showcase of all things Eighth Edition and beyond. 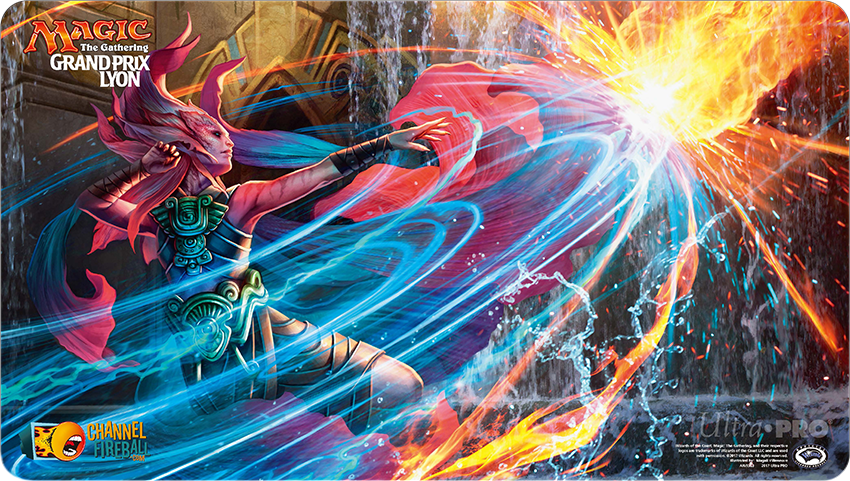 The Grand Prix circuit returns to Standard, and Memphis, Tennessee, to see how Rivals of Ixalan has shaped the format. Tune in to this two-day event February 23–25 to see which decks have risen to the top since its release! 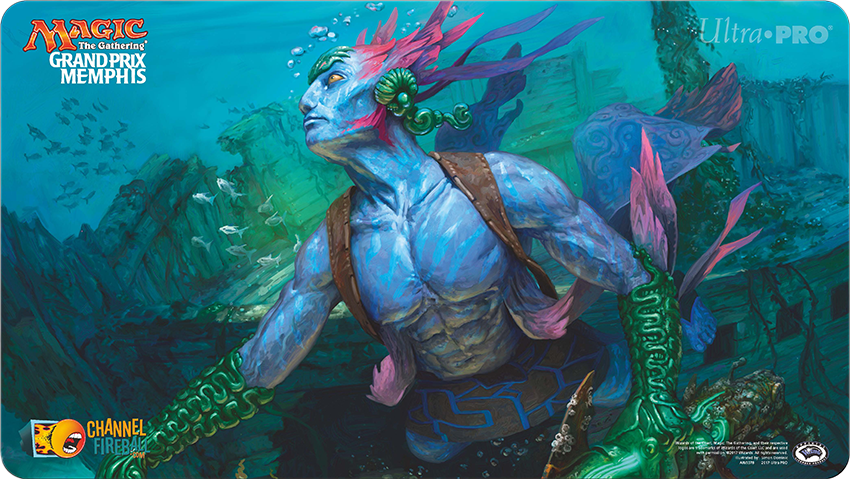 While the GP circuit takes a week off March 2–4, the Magic Online Championship will be taking place at Wizards of the Coast HQ in Renton, Washington, as 24 of the world's best compete for their share of $200,000.

I'm delighted to announce that the Super League duo of Randy Buehler and Athena Froehlich will once again be providing the live video coverage for this tournament, bringing back the great stuff done in 2017 to another three days of action.

The weekend of March 9–11 splits things up a bit. While GP Santiago focuses on Team Limited, Madrid will highlight the Team Trios Constructed format, giving us a look at Standard, Modern, and Legacy. Both events will give players a chance to qualify for Pro Tour 25th Anniversary August 3–5.

Madrid will be the focus for live video coverage for the weekend.

As it's a team-filled weekend, Madrid and Santiago will each have three event-exclusive playmats. The three playmats feature the card art from Etali, Primal Storm (art by Raymond Swanland), Siegehorn Ceratops (art by Filip Burburan), and Wayward Swordtooth (art by Chris Rahn). 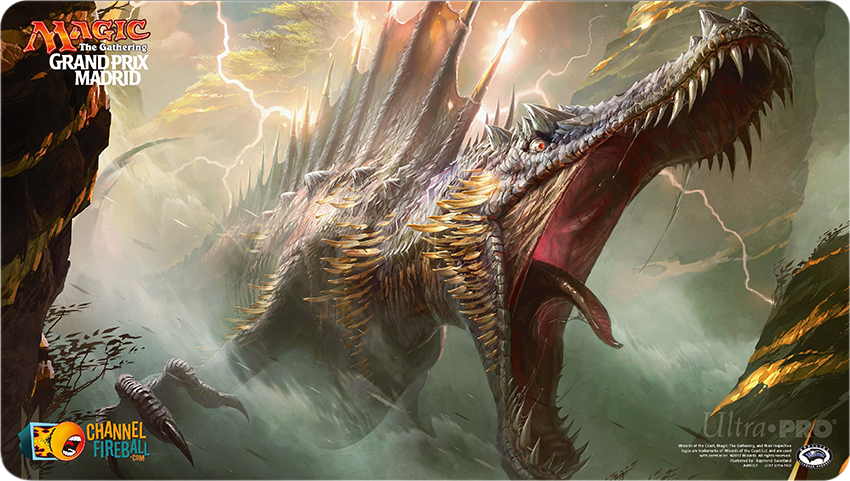 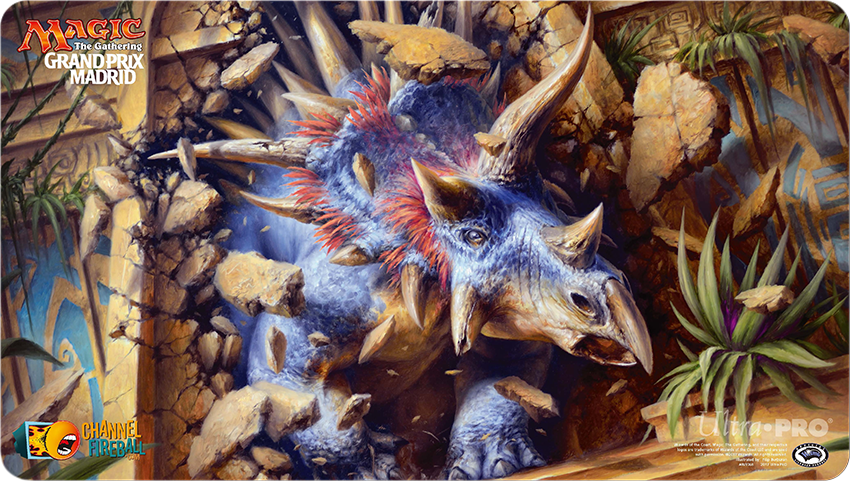 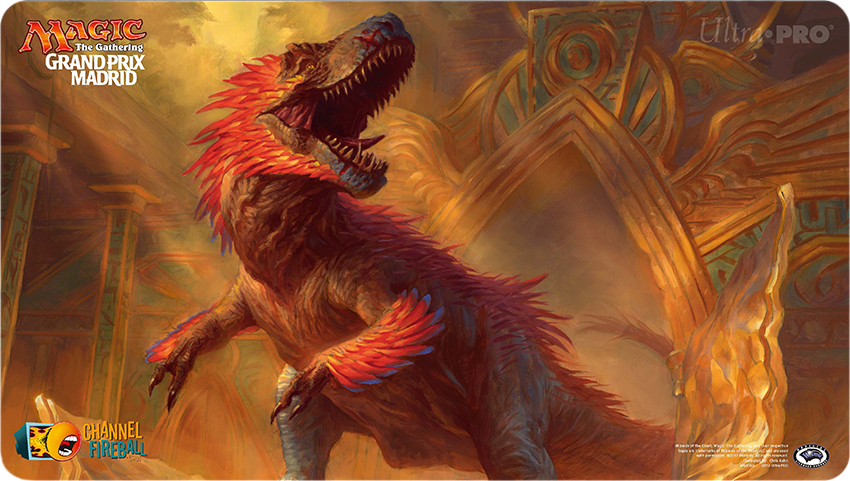 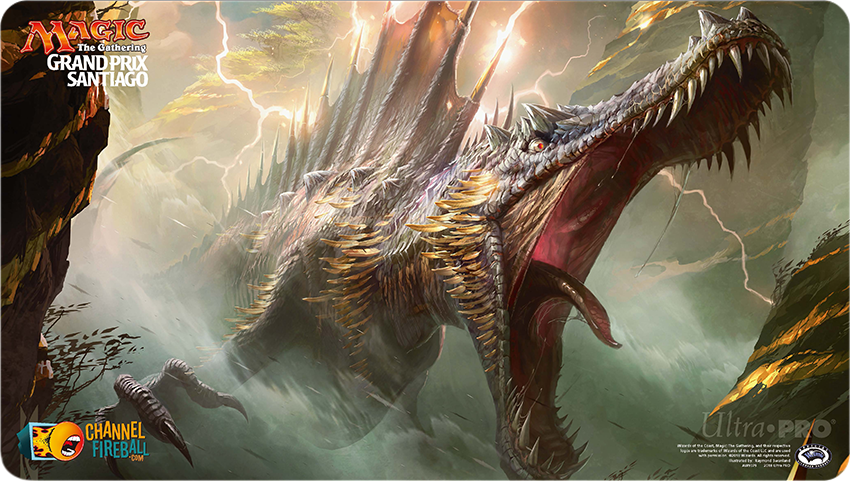 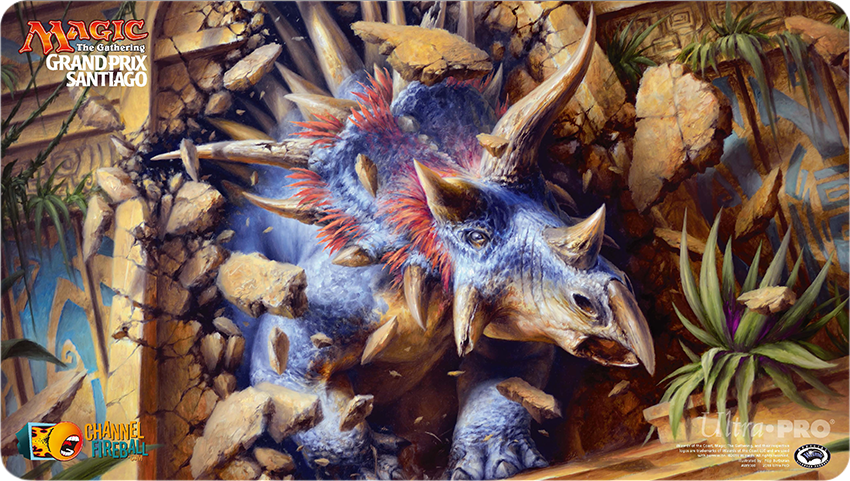 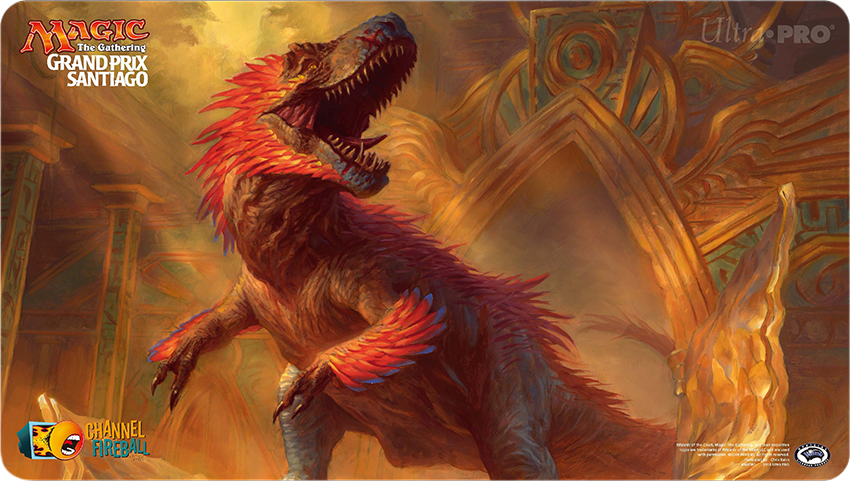 The remaining Grand Prix in March will be receiving text coverage as our live video teams rest up and prepare for a stretch of events through the spring (Marc Calderaro in Phoenix, Chapman Sim in Kyoto with Japanese-language video by Nico Nico, and Tobi Henke in Amsterdam). We'll have a coverage roster article addressing the spring in the coming weeks, but until then, here are the playmats through mid-April! 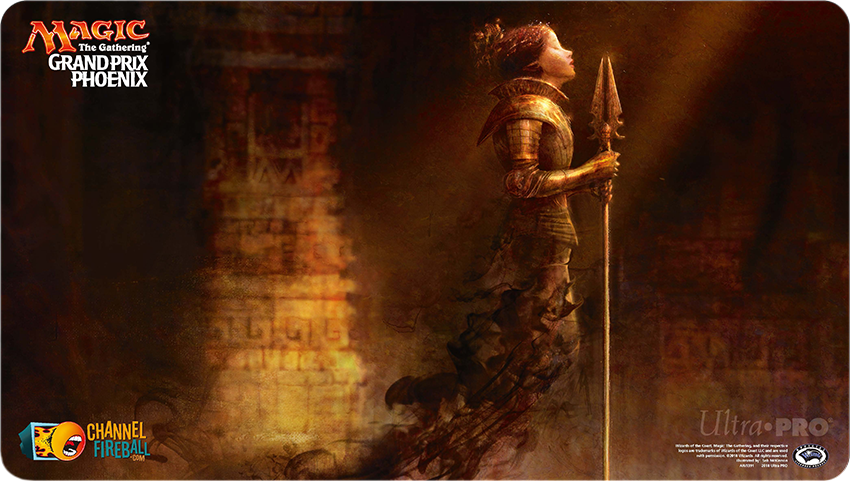 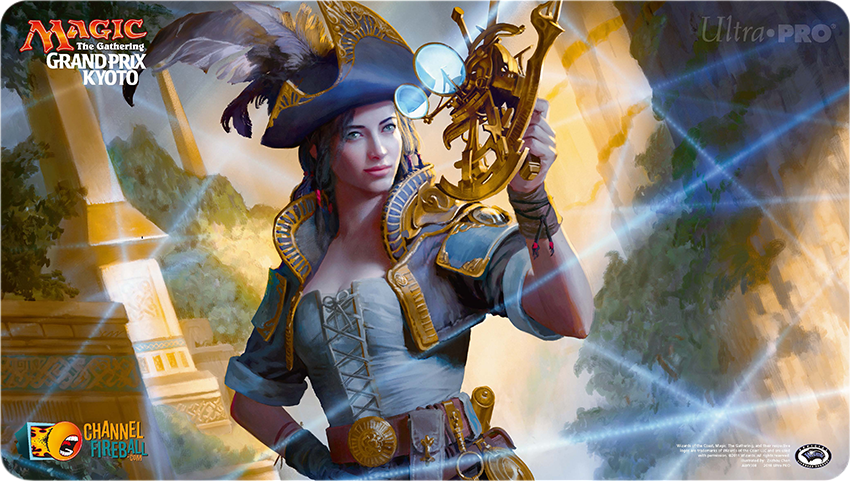 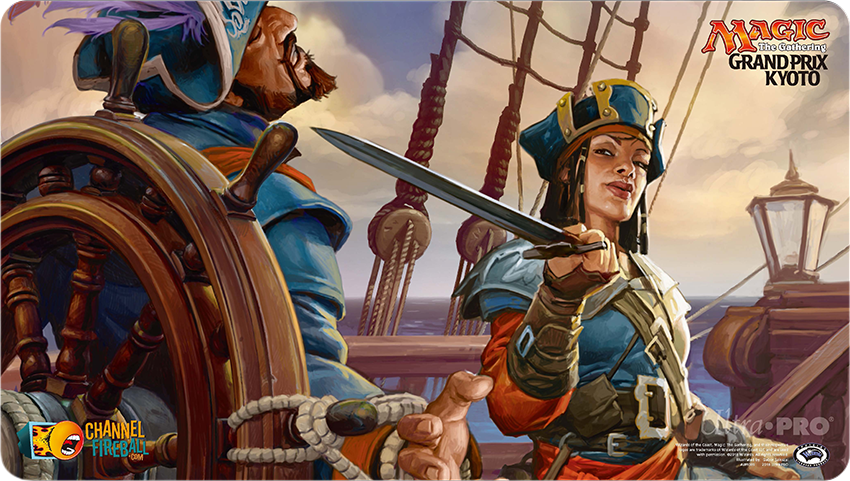 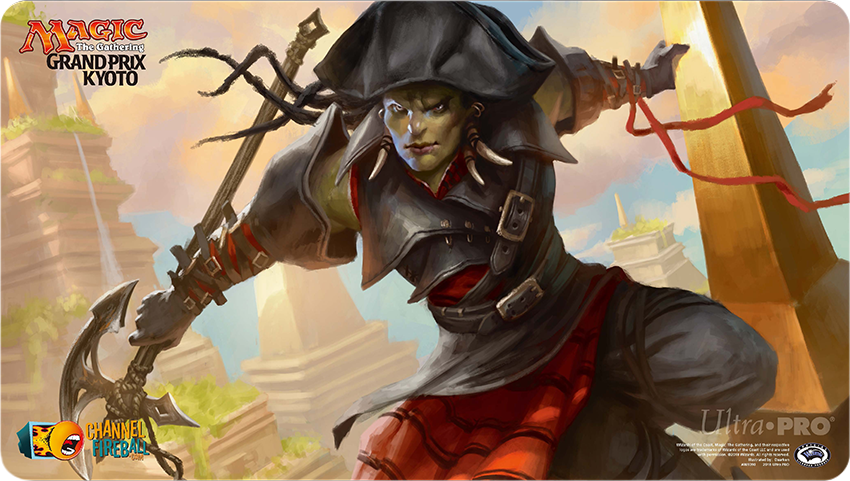 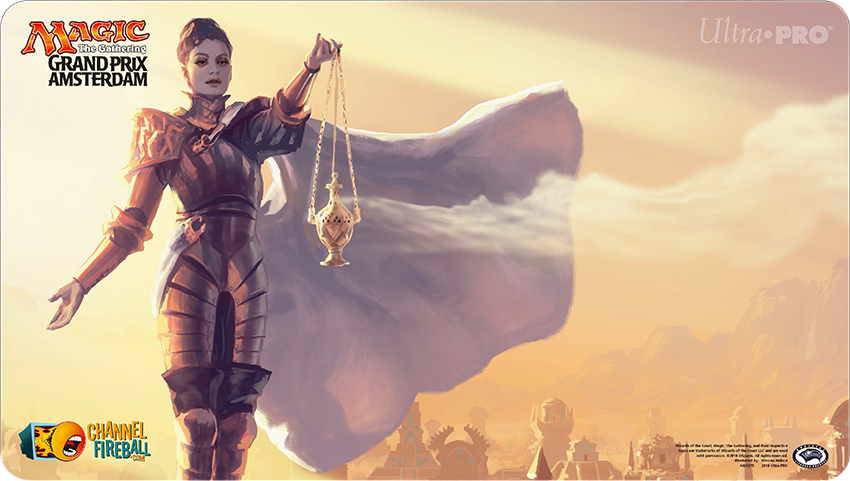 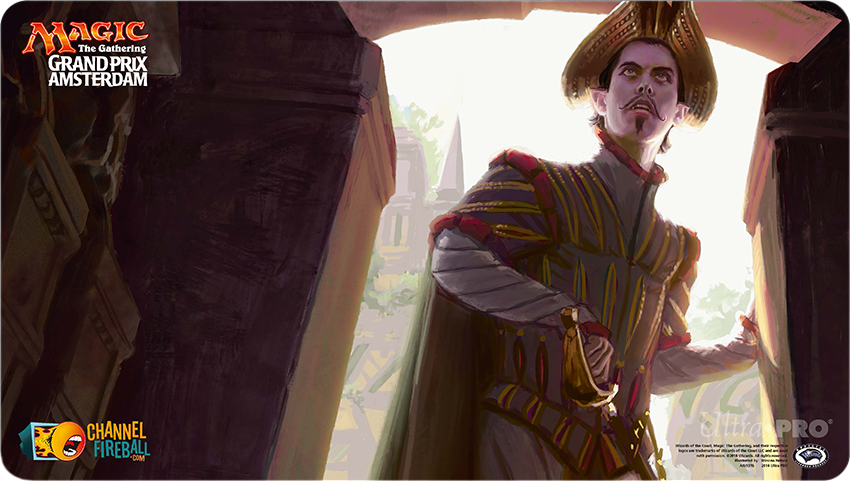 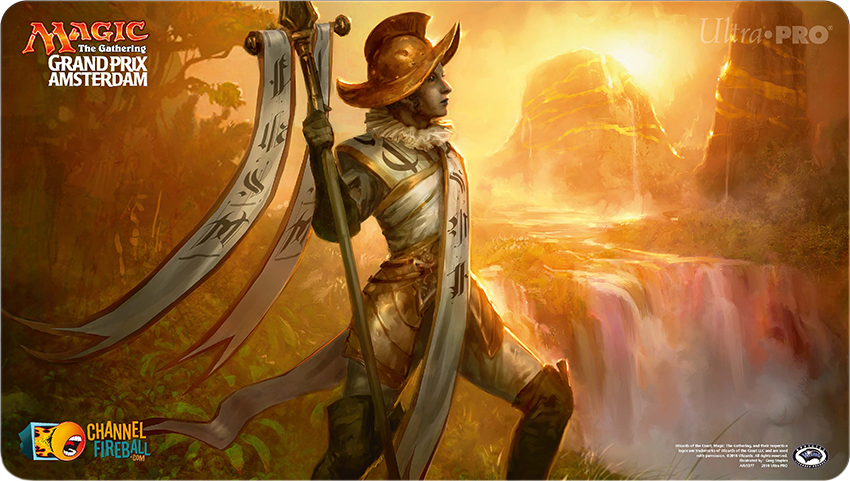 GP Seattle kicks off April with a Grand Prix double-header featuring a Legacy main event on Friday and Saturday alongside a Standard main event on Saturday and Sunday. There are two event-exclusive playmats for this event, showcasing two Rivals of Ixalan cards, including a reprint that has become a staple for the Merfolk archetype in Eternal formats. 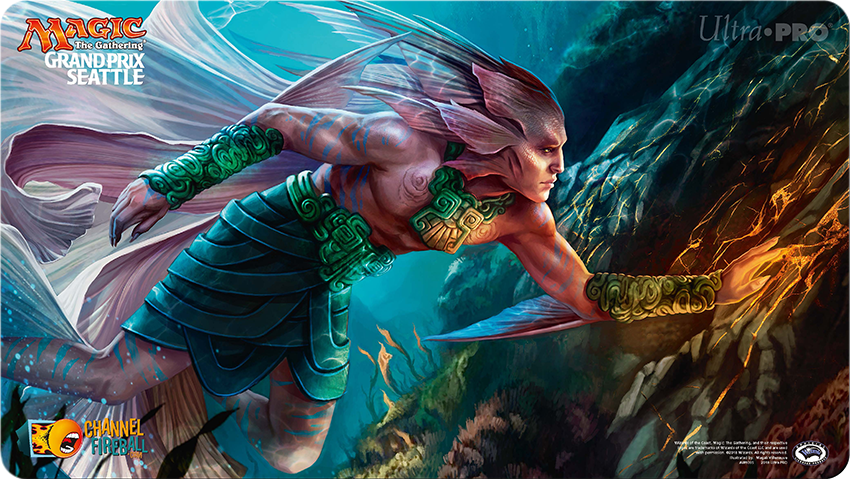 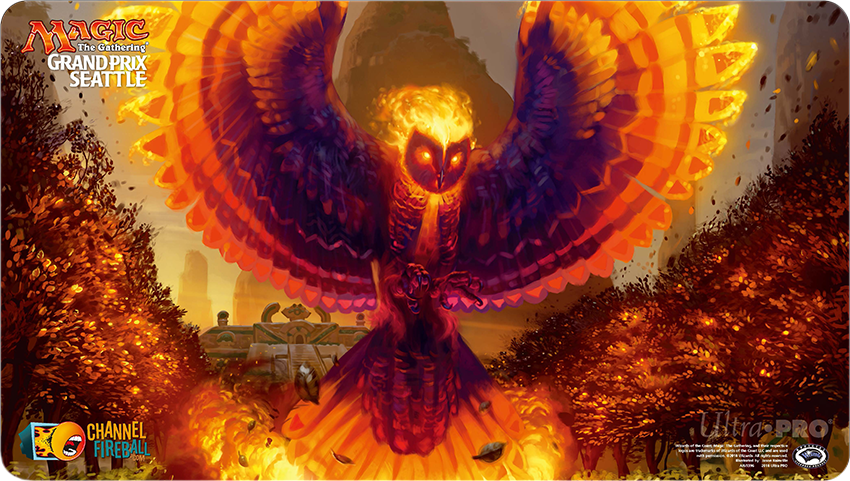 And finally, before the release of Dominaria in April, Hartford and Sydney wrap up this season of Grand Prix with two-day Modern tournaments and an event-exclusive playmat showcasing the incredibly cool Blood Sun (with art by Emrah Elmasli). 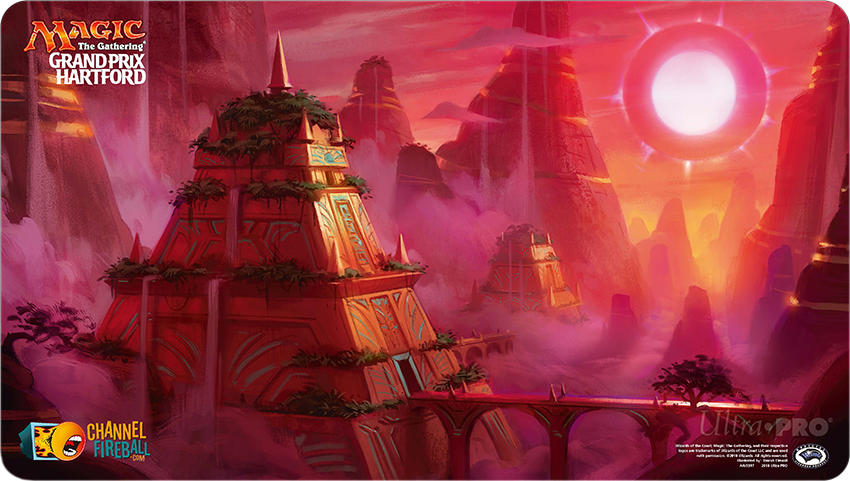 Sydney has the wrinkle of being a Team Unified Modern main event, so players who compete in that one will have the chance of getting one of these three offerings. 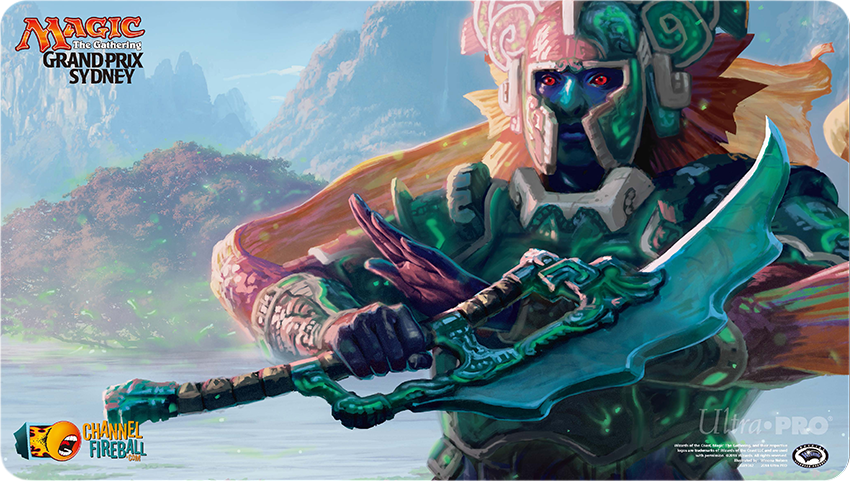 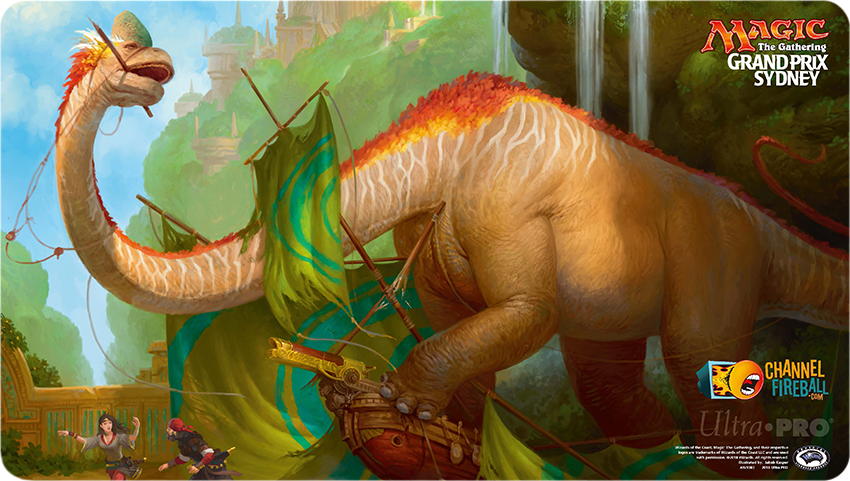 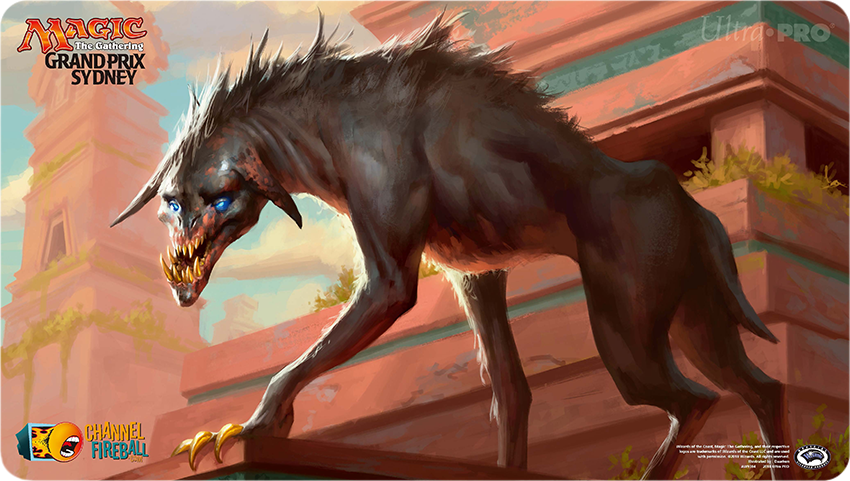 That's a lot of Grand Prix, a lot of coverage, and a whole lot of playmats . . . and oh, right, there's more! The prize wall at GPs will showcase this season's Grand Prix T-shirt for you to pick up, themed to Rivals of Ixalan.

That's all for GPs this week. But we're not done just yet.

Eternal Weekend returns in 2018, and with some big news—an expansion into Asia!

That's right! Eternal Weekends are coming! The first will take place in Paris, France, the weekend of May 5, as Europe's best Eternal players—and very likely some globetrotters as well—make their way to battle for the titles of Legacy and Vintage Champions.

The second Eternal Weekend takes place the weekend of August 18 in Yokohama, Japan, as the Legacy and Vintage Championships make their way to Japan for the very first time.

The third Eternal Weekend will take place in the United States, and we'll have more information available to you later this year on the location as those details are finalized.

Since Pro Tour Ixalan, a couple of changes have taken place on a few of the competing teams in the 2017–18 Pro Tour Team Series. We also have a slew of newcomers who will be making a fashionably late debut at Pro Tour Rivals of Ixalan with their squads.

And now, the new faces.

Confluence is a combo of players primarily based out of Hong Kong who are seeking to turn their Pro Tour qualifications into a little bit more for the 2017–18 season.

Team Gamer's Haven brings together players from coast to coast as they look to maximize their Pro Tour invitations under one banner. 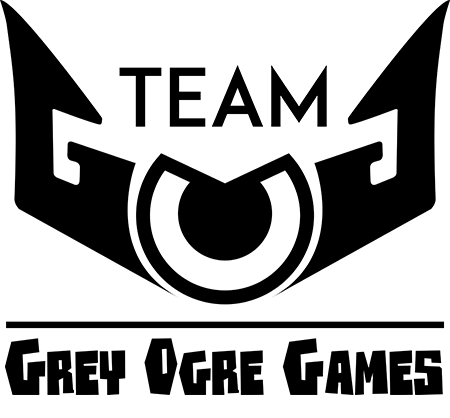 Captained by Pro Tour Hour of Devastation Top 8 competitor Felix Leong, Grey Ogre Games represents some of Asia's up-and-coming players as they look to make their mark on the Pro Tour. 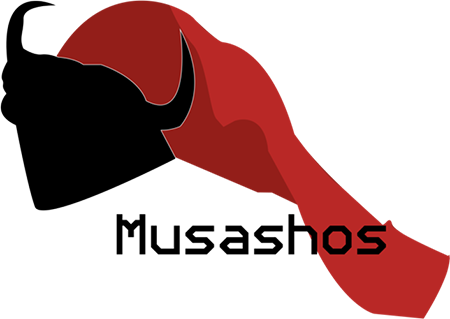 A team made up entirely of Spanish players, including Pro Tour Fate Reforged Champion Antonio Del Moral Léon, Musashos is looking to kick off their 2017–18 season by defending their home turf in Bilbao. 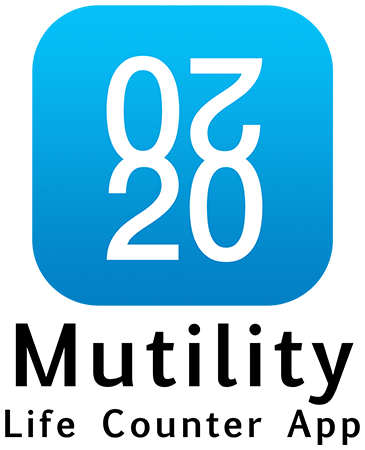 Mutility brings together top finishes from various GPs and RPTQ winners in a bid to climb to the top of the standings.

Posted in Competitive Gaming on January 11, 2018