s Pro Tour Dragon's Maze and the conclusion to the 2012–13 pro season fast approaches, it is time to announce the details of the 2013–14 Pro Tour season and Pro Players Club.

The addition of a fourth Pro Tour required us to realign the beginning and the end of the pro season. The 2013–14 season will begin at Grand Prix Guadalajara (May 24, 2013) and conclude with the Core Set Pro Tour (Summer 2014). The plan going forward is for the summer Pro Tour to mark the end of a season, and the first Grand Prix after that Pro Tour will start the new season.

With that season framework in mind, let's dive into what's changing across premier play.

Because of the additional Pro Points available from a fourth Pro Tour and the season running longer than the traditional twelve months, we have adjusted the Pro Players Club thresholds for 2013–14. During this evaluation, we also took the opportunity to revisit the benefits for each level. Before diving into the full benefits, I'm excited to announce two significant changes:

Here's a full rundown of the thresholds and benefits at each level, with the new benefits for 2013–14 noted.

Editor's note: This page has been updated since its initial publication to include revisions announced here.

(*) If member is promoted to Silver level at the final event of the season, he or she receives an invitation to the first Pro Tour of the following season he or she does not have an existing invitation to.
(**) The free sleep-in special benefit will also be given to Magic Pro Tour Hall of Famers.

We want to ensure that exceptional finishes at Pro Tours are the primary contributor to a player's Pro Point total (and therefore the player's level in the Pro Club). There are two major changes we're instituting to reinforce that goal:

Along with determining a player's Pro Club level, the annual Pro Points total determines the National Champion slot for each country at the World Magic Cup and the regional and at-large invitations to the World Championship. Pro Points earned outside a player's top five Grand Prix finishes will be added to a player's lifetime Pro Points total.

Here's an example of how the top-five system will work:

For players chasing Platinum status, the volume of Grand Prix around the world was leading to player burnout due to extensive travel schedules. We want to continue offering lots of Grand Prix to bring this experience to more and more players, but we have no desire to over-incentivize pros to the detriment of their well-being and enjoyment of the game. In our analysis of the last two years, Platinum players earned an average of 8 Pro Points per Pro Tour. That, along with a rough goal of having the top players participate in one premier event per month, helped us determine how many Grand Prix should be counted and establish the new level thresholds.

Looking at the benefit changes at each level, we had several goals in mind.

We wanted to soften the gaps between the different levels with new rewards. The current Pro Players Club has been working well to reward the top players and create compelling stories of players striving for higher levels, but the steps between each level are steep. Silver-level invites give a tangible benefit for those players at the Pro Tour, something that was lacking previously. Because the Gold-level invites do not come with airfare, the new appearance fee will help Gold members take full advantage of what is the key benefit of their level: an invitation to all Pro Tours.

Another goal was to turn the Silver level into a way to get on or stay on the Pro Tour circuit. The lowest level of the Pro Club should provide a path onto the Pro Tour, and now Silvers will get that first step. This benefit will also help make the Pro Club more pertinent to players living in smaller regions, as they have more difficulties accruing Pro Points due to the limited number of Grand Prix in their areas. More information on how the timing of Silver-level invites works can be found here.

Magic Online is becoming a more important part of the entire Magic ecosystem, and we wanted to help build connections between in-person premier play and the Magic Online Championship Series. Members of the Pro Players Club will earn Qualifying Points for each MOCS season, starting with Season 7, which begins on June 12, 2013.

As these changes are introduced, we will be discontinuing a few of the corner-case policies that have been added recently. We will no longer offer Sponsor's Exemption invitations starting with Pro Tour Theros. The Silver-level Pro Tour invitations will serve the segment of the Magic community we were trying to hit with Sponsor's Exemptions in a much clearer way. We will, however, continue awarding a limited number of Special Invitations for each Pro Tour at our discretion. The Silver- and Gold-level Magic Online PTQs will be eliminated starting with Pro Tour Born of the Gods. Essentially, these were hacks used to make up for the system's shortcomings. Because we were able to reengineer the system to handle those concerns more effectively, those PTQs were no longer needed.

Grand Prix are designed to be the biggest possible Magic events, but we have to make sure it's a positive experience for as many players as possible. Adding extra rounds or secondary cuts has often been necessary to ensure the tournament got to its expected endpoint of Swiss rounds, but doing that can make for extremely long days and unsatisfying experiences.

We're therefore instituting a new rule: Grand Prix will have a maximum of fifteen rounds (nine rounds on Day One, six rounds on Day Two), followed by a Top 8 playoff. For individual Grand Prix with 1,200 or more competitors, Pro Tour invitations will be awarded to all players with at least 39 points at the end of the tournament who do not make the Top 8. Those invitations will be for the Pro Tour fed by that Grand Prix (airfare not included), and will be awarded on the Thursday prior to the Pro Tour. This rule will kick off with Grand Prix held on May 11–12, 2013 (Portland and Beijing). For team Grand Prix, the round limit and points threshold are still under review but will be announced prior to Grand Prix Providence.

The rising interest for Grand Prix, combined with the rapid growth of the game, is also jeopardizing our current system of Grand Prix byes. We're reaching the stage where too high a percentage of Grand Prix competitors have byes, which will ultimately make byes pointless for all.

We started by prioritizing the methods for a player to receive Grand Prix byes:

The chart below illustrates that trend by showing the number and type of Grand Prix byes used from April 2012 through Grand Prix Strasbourg earlier this month. The second line shows what the intended distribution would be, assuming the same number of one-round byes over the same period of time. 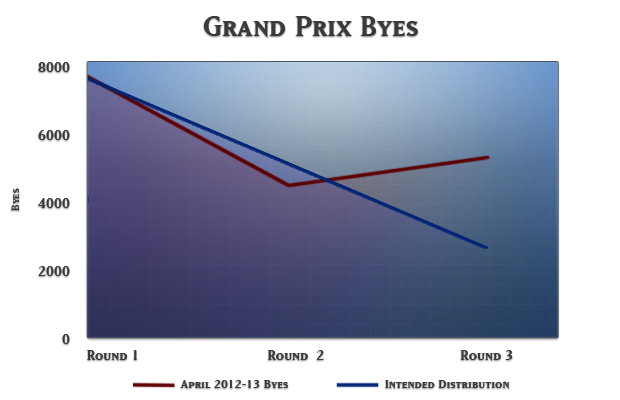 To preserve the intrinsic significance of byes, and after carefully evaluating our options, we have decided that Grand Prix Trials that feed individual Grand Prix will only award a two-round bye to the winner. This will go into effect for Grand Prix Trials feeding Grand Prix scheduled in Season 3 of 2013, kicking off August 17.

Listed below are the dates for the PTQ rounds, which are also the same date ranges as the Planeswalker Points Seasonal Award Seasons used to determine Grand Prix byes:

As mentioned when we announced the addition of a fourth Pro Tour, our goal is to offer a total of 800 store-run Pro Tour qualifiers throughout the year in addition to the 64 Magic Online qualifiers. That breaks down to 200 store-run PTQs and 16 Magic Online PTQs per round.

Our priority for allocating the incremental PTQs was to make sure each geographic region would get more PTQs, even if its growth was slower comparatively to other regions. Therefore, instead of completely resetting the number of events per region, we simply divided the additional PTQs and added them to the current allocation per region. The incremental PTQs will be distributed based on a combination of market size, the tournament player base, and Magic's growth in the region.

Remember that 2014 has four PTQ rounds and each round is shorter than previous years, so adding PTQs overall to the year doesn't mean each round will have more PTQs.

The country breakdown of PTQs within each geographic region will be posted this fall, at the same time as the detailed schedule for the Pro Tour Journey into Nyx qualifier round, as it will be the first season affected by this new allocation.

To complete the picture of our premier play offerings in the next eighteen months, let's take a look at the locations for the major events in 2014. The fourth Pro Tour required us to reevaluate the timing of the World Championship and the World Magic Cup, a combination of events we're dubbing "Worlds Week." In 2014, Worlds Week will take place at the end of the calendar year.

Changes described in this article are reflected in Premier Event Invitation Policy. The only outstanding policy item is the Yearly Planeswalker Points season thresholds for the 2014 World Magic Cup Qualifiers. These will be announced in July after we review the results of the 2013 WMCQs.

I am excited to share all this news with you as I feel that these changes will continue making our Premier Play system a source of inspiration for Magic players around the world. I also would like to thank all of you who take the time to share your feedback. You helped us craft many of these changes by sharing your thoughts through your writing on Magic websites, via social media, and through your thoughtful interactions with many of us inside Wizards of the Coast.

As always, you can reach me via Twitter at @helenebergeot. I look forward to a great year of Magic across the world.