The Past is the Future is Now... Again!

Curious as to what the Top 8 universe looked like the weekend of 2/23?

I was surprised to see that, after more than a half dozen Top 8 appearances last week, Mono-Red Burn disappeared from the top of the hop. Then again, as a Mono-Red Burn player, I got stuffed by turn-two Circle of Protection: Red out of a Countryside Crusher / Devastating Dreams deck (that I think won the PTQ actually), and Sphere of Law from the ostensibly blue-green Next Level Blue.

Domain Zoo was the big winner at the PTQ level this week, scoring two blue envelopes:

When you have access to every color on demand thanks to the intersection of Onslaught and Ravnica Block dual lands, you can play the best and fastest threats from each color. Therefore Domain Zoo has Kird Ape (an almost "Gruul" red card) in the one drop spot next to Isamaru, Hound of Konda, again next to both Tarmogoyf and Dark Confidant at the two. As for removal cards, the deck has both Lightning Helix and Vindicate, best of breed card crushers. The "Domain" half of the Domain Zoo name comes from Gaea's Might and Tribal Flames, Invasion block Legos perfectly snapped into place in this deck as 5 damage spells for very little mana.

One of the unsung advantages of Domain Zoo is its resilience against Dredge. In addition to the sheer speed of the deck, Domain Zoo has Mogg Fanatic on one and Gaddock Teeg at two; the former can remove Bridge from Below with no loss of card advantage and Gaddock Teeg prevents the opponent from playing Dread Return for free or otherwise. In addition, the deck's ability to play any color of spell allows Domain Zoo to splash Meddling Mage, Yixlid Jailer, or even Extirpate to attack in more direct fashion. For a deck (generally) without Duress and Cabal Therapy (though it could of course play those cards), Domain Zoo is very good against combo decks. Many of the above same cards, in particular Gaddock Teeg and Meddling Mage, are great against Enduring Ideal and others, and Kami of Ancient Law and Ronom Unicorn are backbreakers even when the bad guys get there.

From the other side of the metagame, philosophically, Dredge remains... Dredge. It looks like the format's fastest and most powerful deck just got a little bit better with Morningtide. Check out Imperiale's sideboard of Bitterblossom. Not only does Bitterblossom give the deck a fairly castable offensive / defensive spell that can get in a couple of points or block to buy time, but subtly, the Morningtide rare can quickly put up three 1/1 bodies to help flash back Dread Return.

One of the nice additions to the blue envelope list for the season is Spire Blue. This strategy got its first look at the preseason Worlds PTQ (presuming you don't count Neil Reeves's U.S. Nationals Top 8 a few years back...). Mehran Latif's version is a little lighter on the Spire Golems and heavier on other colors.

Spire Blue is a blue control deck with a drop of tempo-orientation. Unlike many straight control decks, it can clean up with Umezawa's Jitte, and it is much better at presenting threats than most due to the affinity of Spire Golem. The deck's long game is very solid thanks to Meloku the Clouded Mirror, and it can fight out of a variety of situations with a solid Trinket Mage package; Latif's Steam Vents and Watery Grave help Latif to play Engineered Explosives for different sunburst points without dramatically affecting his mana efficiency or Vedalken Shackles... In fact, the presence of Onslaught dual lands actually makes Sensei's Divining Top better.

One of the things I really like about Latif's build is the four Force Spikes in the sideboard. There are a lot of fast cards you want to play on the defensive one-two in a blue deck... Force Spike has been in the main deck of certain versions of Next Level Blue over Spell Snare; it's just a more relevant response card in certain matchups (like when the opponent is tapping out for Loxodon Hierarch).

Now of course, there was a big Extended event this past weekend, Grand Prix–Vancouver. The Top 8 was loaded with great decks, headlined by the winner and another brand new deck.


At first glance, this probably looks like Next Level Blue, but notice how the deck has no Chrome Moxes and no Counterbalance combo with Sensei's Divining Top. Instead the mighty Paul Cheon ran the seldom played Ancestral Vision and an end game with Rude Awakening as a finisher.

Paul's deck ran an absolute ton of "Control Magic" effects—seven Threads of Disloyalty and Vedalken Shackles starting as well as Sower of Temptation in the board—and complemented all of these with Miren, the Moaning Well.

The really cool thing about this deck is that even though it is philosophically "mono-blue," the presence of Flooded Strand and Polluted Delta from Onslaught allowed the former U.S. National Champion to splash green for Tarmogoyf, red for Ancient Grudge, and black for Tsabo's Decree and Yixlid Jailer! Surely no one is safe... Blue control is there to stop "decks" and the splashes helped the Champ-Champ to annihilate a wide palette of linear strategies. 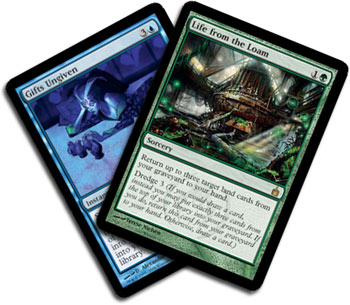 "The future of American Magic" Ben Lundquist once again shattered every player in the room but one with his Urza's Towers, this time bringing Zack Hall with him via the same seventy-five. This 'Tron deck is very high on raw power, its many expensive spells enabled by the UrzaTron. Ben's deck actually had a nice curve... Third-turn Gifts Ungiven for Urza's Mine, Urza's Power Plant, Urza's Tower, and Life from the Loam could assemble the 'Tron from zero. Ben also ran a lonely Lonely Sandbar, borrowing a little from the more traditional Loam decks and setting up Dredge combinations for his Academy Ruins (many artifacts), Moment's Peace as free cards played from the graveyard, or more Urza's lands to scoop up with the Loam itself.

While no one is really safe from the boogeyman Dredge, Blue-Green 'Tron has a nice defense in Moment's Peace (the local equivalent to Wrath of God, actually more effective in the Dredge matchup, and an effective response to opponents with Gaea's Might).

I'm probably missing something, but I don't see how this deck can easily deal with Gaddock Teeg... That little master turns off Engineered Explosives, Gifts Ungiven, Mindslaver, and Repeal; while Ben had a fair number of potential finishers in his three big creatures, certainly Teeg would make the deck a little more ponderous.

The requisite Tarmogoyfs waited in the sideboard in this deck, ready to jump in as a substitute against the opponent's sideboard cards.


For most of the season, this strategy has been overshadowed by "one card combo" Enduring Ideal, but with the Vancouver Top 8, it looks like TEPS (The Extended Perfect Storm) is back. If you aren't familiar with TEPS, the deck plays a ton of cheap or mana acceleration cards (or both) in a single turn to simultaneously produce mana and increase the Storm count. Then it is Mind's Desire or Tendrils of Agony (or Mind's Desireinto Tendrils of Agony) for the kill.

Jason Fleurant rounded out the Top 8 with a pretty stock Death Cloud deck. This strategy runs a lot of big spells (Death Cloud being the biggest of them all), including multiple planeswalkers. The biggest incentives to this strategy are that with so many expensive spells, it is difficult to be locked by Counterbalance whereas the Death Cloud deck can create value and generate card advantage with numerous effective trades in a variety of matchups.

This deck runs both Sakura-Tribe Elderand Ravenous Baloth, a nice pair of sacrifice outlets against Dredge. Fleurant was a brave mage... he didn't run anything else for the scariest of the scary matchups!

I am not sure if TEPS is going to stick around as the format continues; it is a known deck—more well-known than Enduring Ideal at one point—but has been ignored for most of the season. I think that Blue-Green 'Tron will increase significantly in popularity but that the real prize is the winning deck. This just seems like an exciting and different look at blue control that many players will consider copying, or perhaps hybridizing with Spire Blue or another model.