Everything we so carefully set up with Lorwyn is now coming to fruition in Shadowmoor, and you love it, don't you? Sleeping lands awaken, the inhabitants change, mist rolls across the land, and creepy crawlies are once again free to roam in the deep shadows of unnatural night.

What we weren't able to tell you through the Lorwyn block was that two (!) worlds had been built simultaneously: the bright, ever-day, color-saturated Lorwyn and its charmingly creepy bookend that eventually became known as Shadowmoor. And we had enough of it done in time to preview both (!) worlds on Futuresight "timeshifted" cards. Immediately after our big in-house concept push, Steve Prescott was tasked with creating card illustrations for Lorwyn Kithkin (Goldmeadow Lookout and its token, Goldmeadow Harrier), and Omar with painting Mistmeadow Skulk, a definitive example of a post-aurora Kithkin.

The process was fairly fluid at the beginning. The artists (Steve Prescott, Omar Rayyan and Warren Mahy) understood that the end result would be two worlds, complete with "before and afters" of each race, and were free to brainstorm on either side of the transition. We populated the walls with drawings of various takes on elves, treefolk, elementals, fae, and the like. Slowly we would start separating them out into groups. This feels good for light, that feels good for dark etc. Sometimes the Lorwyn take on a race would lock in first, as was the case with giants, and sometimes the Shadowmoor version would solidify earlier, as was the case with kithkin, and we would work backward to set up the payoff. 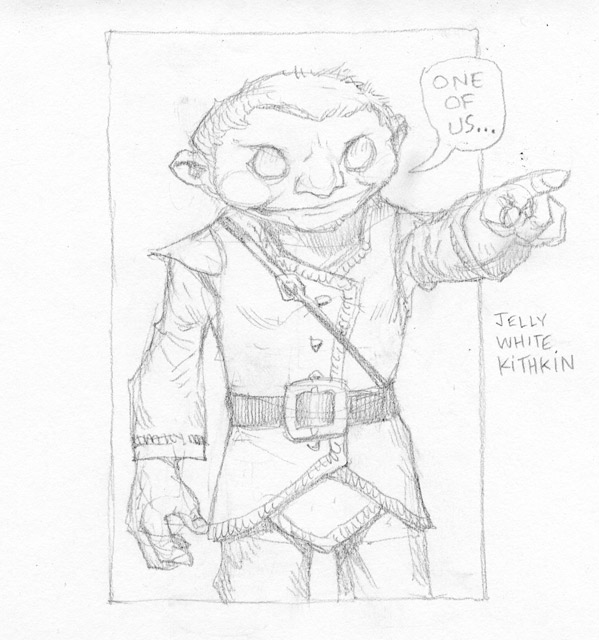 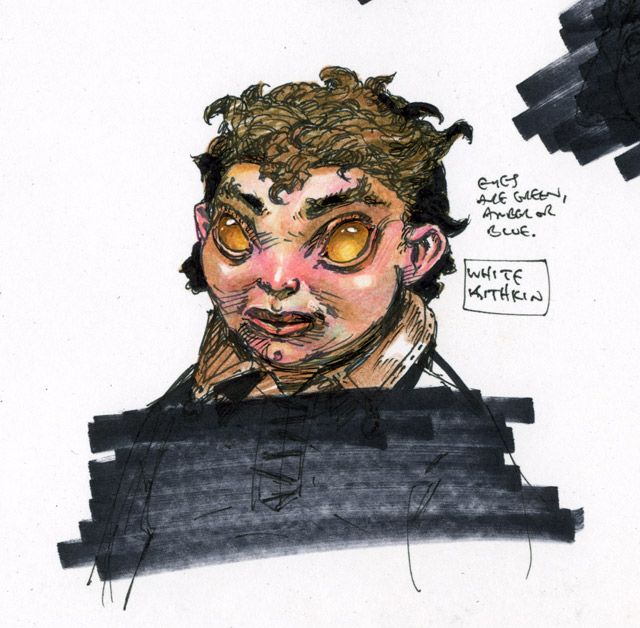 Sometimes the lines were blurrier, as with the greater elementals. Once we started going the animal-amalgam route (to keep them away from both treefolk and giants who also populated both worlds) the concept crew came up with a lot of weird crazy animal-piles. How would a greater elemental in beautiful Lorwyn differ from a elemental in Shadowmoor? Both were animal combos. As the work started being distilled on the walls and separated into pre and post we decided it would be more a matter of visual intent. The Lorwyn elementals could be made of bugs or spiders or whatever, where the elements that comprised it happened to be icky or off-putting, but in Shadowmoor the elemental would be made of components with no other possible function than to hurt you. Here's a good example. It's a snake... made of a hive of snakes! 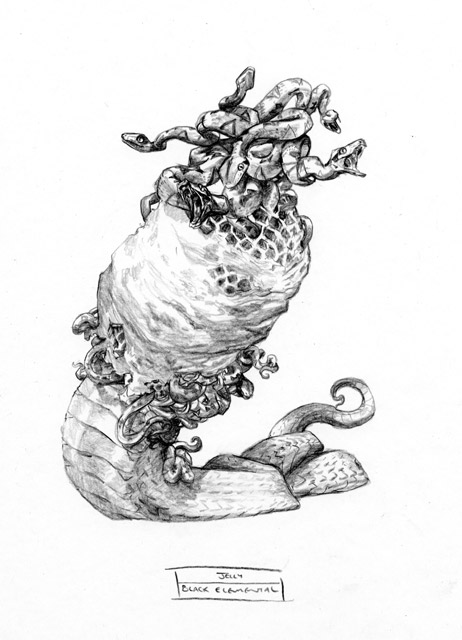 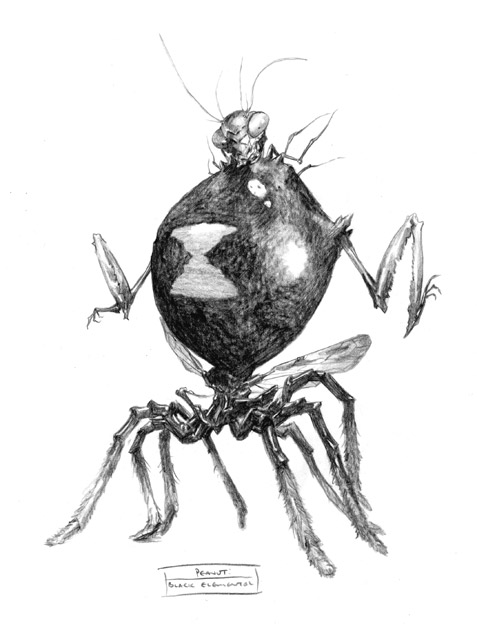 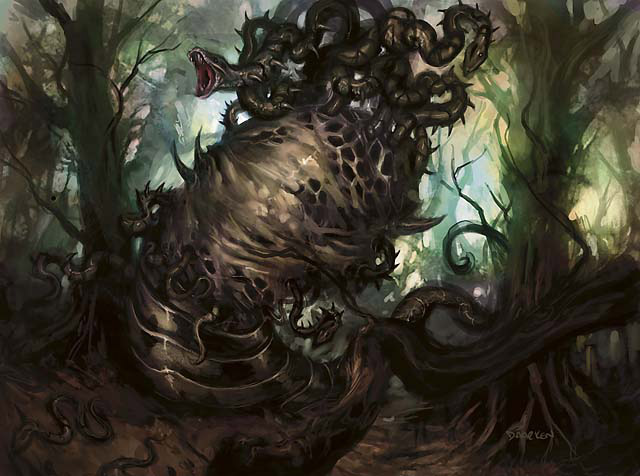 The considerations were not strictly visual. We had to work with design and development to lock in the tribes' color shifts between blocks, which would inform the "personality" and therefore the visual vibe of each tribe. Kithkin moved from green-white (community-oriented) to white-blue (insular and paranoid). Merfolk would move from white-blue (a bit aloof but serving transportation and communication purposes for the tribes) to blue-black (more vicious and feral, now using the waterways to attack, steal, and ambush). Not everything got darker though; it was decided for variety the faeries would stay the same and elves would actually rise to the occasion in response to the darkening of the world and become nobler, and a bit humbled (black-green to green-white). Their post-Aurora thinner "thorn vine" horns were a subtle nod to this change in attitude (and the last thing to be nailed down by Richard Whitters for the Shadowmoor styleguide).

Co-developing two interdependent worlds was a monster task, but it allowed us to be as smart and insightful and deliberate as possible for the end result. Here's a good example:
Faeries.

During our early brainstorming Prescott developed a dual take on the fae: an insectoid faerie and a flower based faerie. Again, early on we weren't checking boxes on what went where, simply think-tanking on the topline concerns of the world in general. Storybook. European. No human silhouettes. You can read more about these points in my Lorwyn article The Human Shaped Hole. Maybe flower faeries were Lorwyn and insect faeries were Shadowmoor. Or maybe blue faeries were flowery and black faeries were insectoid. Once it was decided that the fae didn't change color affiliation between settings it seemed wrong to vary their morphology too much. We decided to keep them as more of a baseline between sets. This also meant that their nature didn't change much... capricious meddlers and pests, with a touch of a mean streak on top of just being gossips and nuisances. The insectoid visual played to this extremely well, so that's what we stuck with. I hated to not use the insect / flower dynamic somehow, so I pitched this drawing of their dark queen, a large "faerie" composed entirely of flowers. The fae would buzz around her the same way bees buzz around the flowers in your yard. And not just any flowers... I did a bit of research and based her on flowers all toxic enough to kill a dog (if a dog eats them). That drawing would become Oona. And we teased her in Lorwyn. That's why the Island / SwampLorwyn land diptych is populated with colorful flowers. That's why faerie magic is often represented with flowers or petals; why Secluded Glen is such a beautiful place. For the ominous payoff when the queen of the fae is revealed!

Shadowmoor also gave us opportunity to introduce fun new things that didn't have to be shoehorned into one of Lorwyn's eight tribes. In very early Lorwyn discussions about what races to include, ex-Magic Creative member Brandon Bozzi pitched the idea of an artifact "tribe" with a Scarecrow or Tin Man vibe. I loved the idea; it fit the world, and had not really been utilized in Magic much (maybe the Myr count?). Anyways, we were unable to get traction on it... until Shadowmoor needed mana-fixers! It was an eleventh-hour addition, but I casually overheard Doug Beyer talking about the number of artifact creatures in the set and pondering what they might be. I re-pitched the "Have you thought about tribing them up?" discussion, and for Shadowmoor spun it as a scarecrow / punkin'head / wickerman sort of vibe. It finally stuck. Richard Whitters arrived in-house from his native Canada just in time to be Johnny-on-the-Spot for the final needs of the Shadowmoor style guide. Here are his Scarecrow concepts. 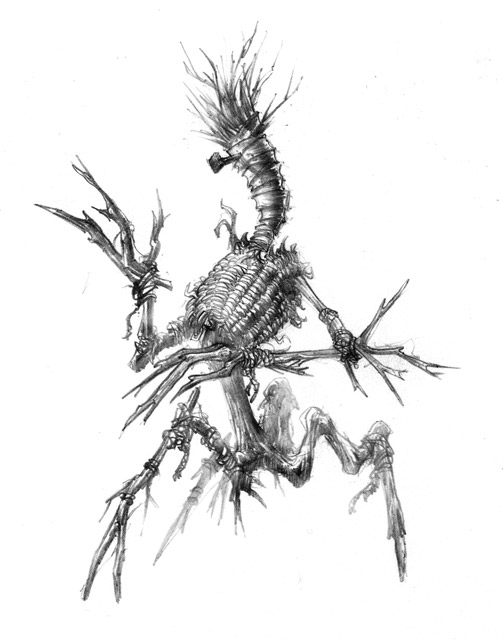 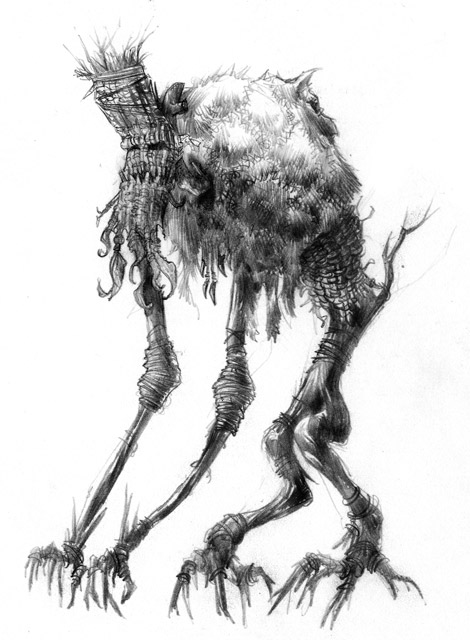 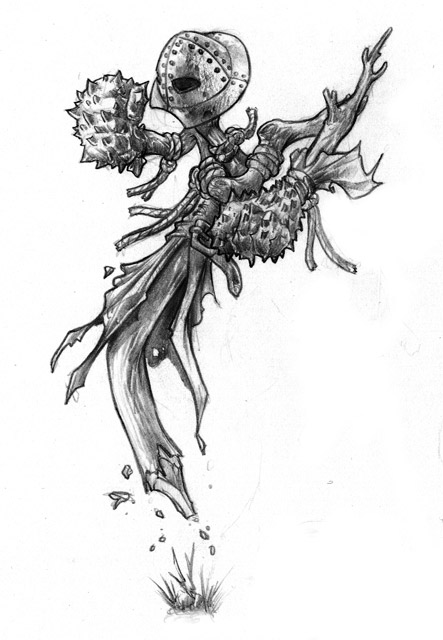 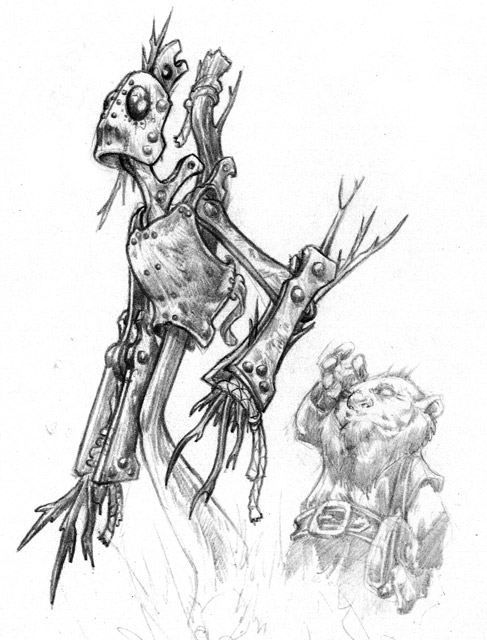 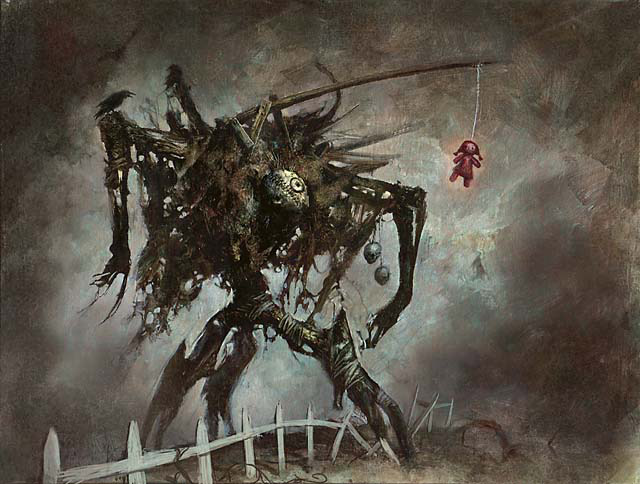 We started the concept push with only my quick pencil drawings of basic lands for each setting (some of which stuck, like the Plains for each, and some of which became other things; the Lorwyn concepts of turtle shell island and petrified dragon mountain were originally my basic land ideas, and were shuffled off as the first ideas for a cycle of sleeping creature lands which would awaken in Shadowmoor. Design and development were kind enough to design cards to this concept at our request). 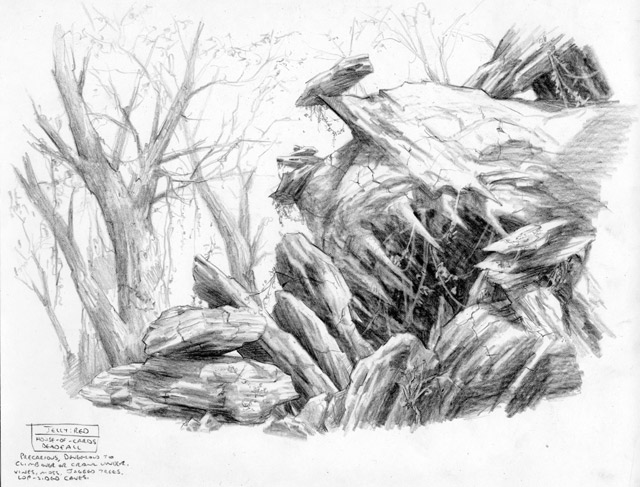 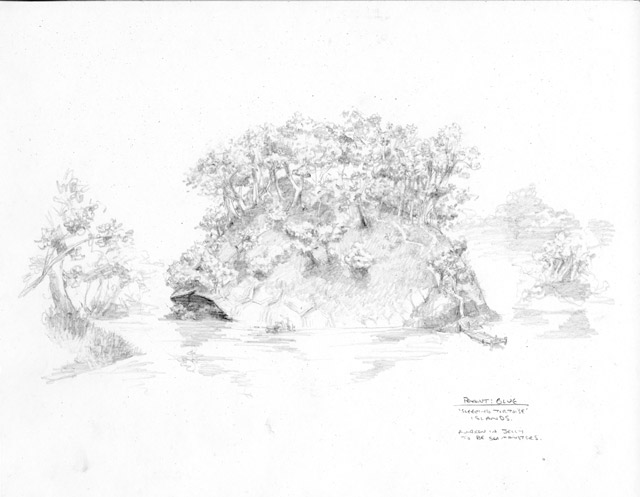 By the end of our first concept push we had Lorwyn fairly nailed down with a couple exceptions and Shadowmoor was at least a skeletal style guide, with enough direction to start commissioning some additional concept art from various illustrators out-of-house. Dave Allsop, Dave Kendall, Daarken, Drew Tucker, Brandon Kitkouski, rk post, Trev Hairsine, and Chippy all worked remotely while Anthony Waters, Cyril van der Haegen, and once again Warren Mahy worked in-house to take the many, many pencil drawings we had from the first concept push to color rough for the Shadowmoor style guide.

Now it was time to commission the art. Again, I rested heavily on our high-octane "storybook" guys... guys like Warren, Larry MacDougall, Omar Rayyan, Kev Walker, Jesper, Prescott and Wayne Reynolds, but unlike Lorwyn, reintroduced some of our great, gritty, dark guys. Daarken, Dave Kendall, Dave Allsop, Richard Kane Ferguson, Thomas M. Baxa, Drew Tucker, and their ilk. These guys sat it out through Lorwyn amidst promises from me that I would make it up to them... that a setting was coming that they could really shine in; that it would "mean something" when they reemerged in the game. I still stand by that. Lorwyn sets up a stylish, different, and immersive baseline setting for Shadowmoor to come along and kick the door in and pay it all forward. 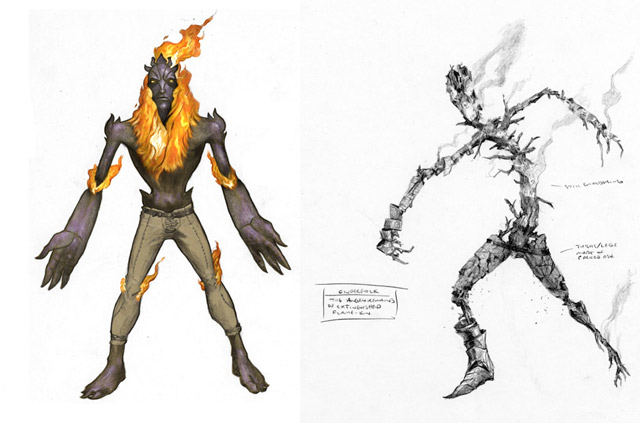 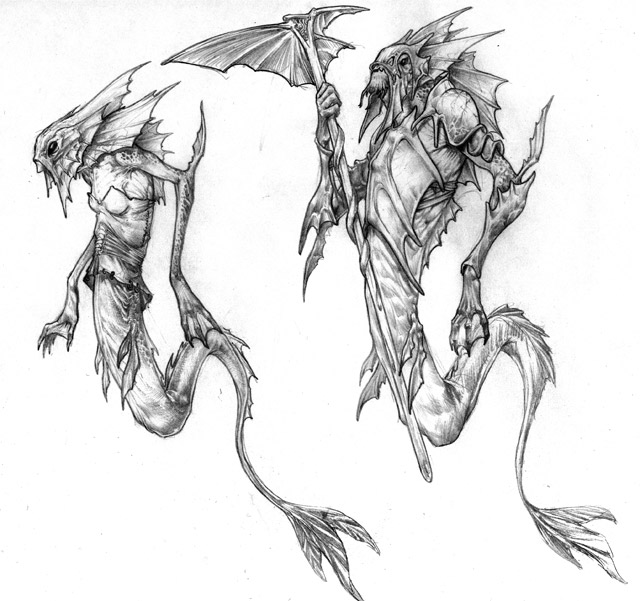 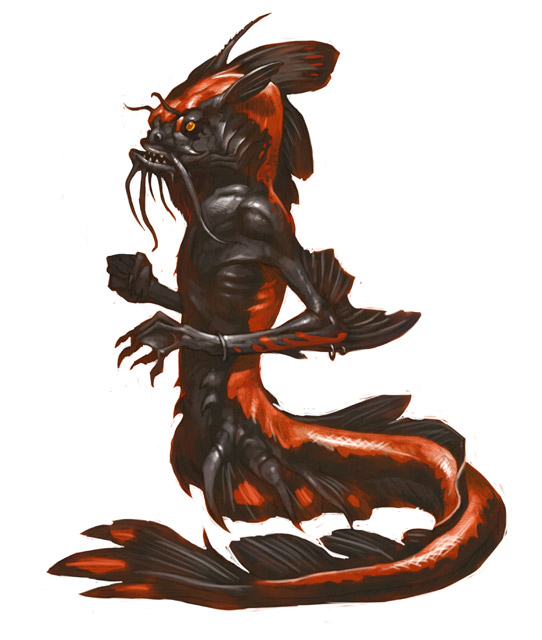 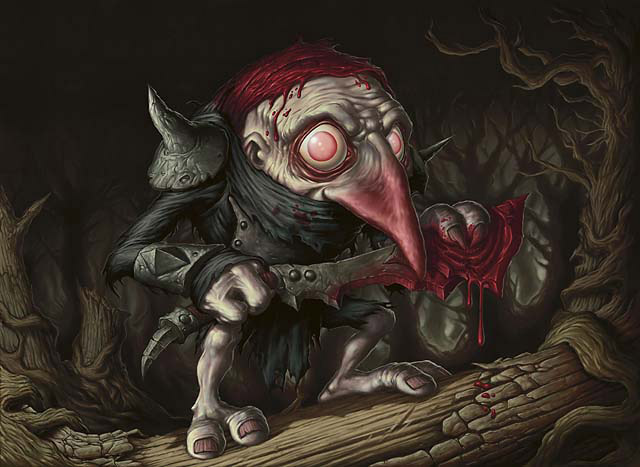