Phyrexia vs. the Coalition Decklists 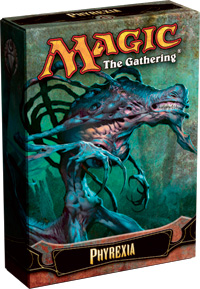 he Phyrexian servant’s mouth-scythes vibrate in a mockery of organic life. "The Grand Evolution has begun," it rasps. "Our portals have pierced Dominaria’s planar boundaries, opening the way for our invasion. The biologicals’ flesh is ripe for phyresis—it begs for the etching benevolence of the Father of Machines."

"What do I have at my disposal?" you ask.

"The birth priests have awakened broodlings and debasers, a force of plague carriers, and a Gargantua, my lord." The servant leans forward, its grease-blackened cilia quivering. "The biologicals’ early scouts have proved useful as raw materials for reprocessing—a Negator hatches as we speak."

"Excellent. What of the enemy?"

"Dominaria has united against us, amassing a meaningless coalition of the unevolved and the incomplete,” the servant says, its eye-rods clicking in disgust. "Their defiance violates our every Scripture."

"Then we shall enlighten them,” you snarl, clenching your fists. "Go, convey my order to invade. We shall tear the primitive flesh from their frames and forge their very bodies anew. We shall remake this plane in the name of Phyrexia!" 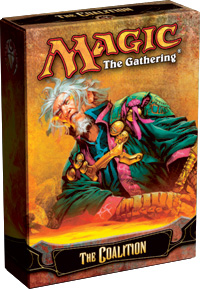 here’s too much blood. We’re losing her," you murmur, holding your patient’s limp hand.

"I’m afraid I’ve more bad news, Chief," says your lieutenant. "The Phyrexians are breaking through the line. More warships have been spilling out of those portals all night. And there’s one more thing—"

"No time. Inform the fieldmaster we’re falling back. Round up the other healers, and let’s get out of here."

"That’s the other piece of bad news," says the lieutenant, looking down at the patient’s torn frame. "They’re targeting the leadership. She was fifth in command—just above you. You’re fieldmaster now."

You glance out the door of the medical tent. You can make out irregular shapes cantering and lurching over the rise, glistening like knives in the bone-white light of the planar gates. "What’ve we got," you ask.

"Not much. A few battlemages in the next tent, a Yavimayan with some war experience . . ."

"Conjure a sky-signal—everyone’s a Dominarian soldier now. We all fight, or we all die. Tell me lieutenant, have you ever summoned a dragon?"

1 Darigaaz, the Igniter 1 Rith, the Awakener 1 Treva, the Renewer
35 Cards