rchitecture tells an important story in a city-based plane, especially in the lands occupied by the guilds. Whether it's the organized, utilitarian Boros Garrison of the Boros or the demolished Gruul Turf the Gruul call home, the way a territory looks ties strongly to the theme of the guild that occupies it.

The Izzet guild is no exception. Here are a couple of D. Alexander Gregory's concept sketches from the Guildpact style guide that show some of the characteristic Izzet environment -- the clay, glass, brass and iron landscape of ducts, pipes and boilers deep under Ravnica where they ply their inventive magic. In the bottom image, note the elemental under glass in the background -- an early look at the design of the Steamcore Weird. 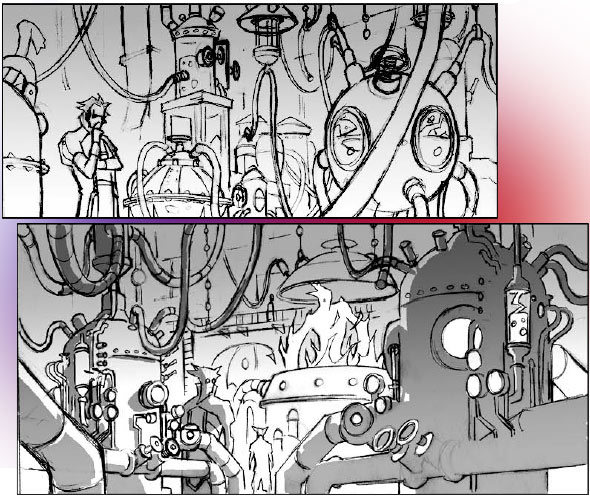 One of the challenges in the art direction of Izzet machinery was to make sure their inventions looked alchemical, not technological. The quintessential "money shot" of the Izzet boilerworks environment is John Avon's piece on the card Izzet Boilerworks, below. Note how the power here is definitely the pressure of steam, not electricity or circuitry.

We also get a great shot of a boilerworks interior behind this ambitious Izzet pyromage in Invoke the Firemind. The fact that the boilers and pipes are so large-scale is important -- with a dragon as their guild-leader and role model, the Izzet never do anything small.

Interestingly, in the Ravnica: City of Guilds set we got an early look at the Izzet's subterranean infrastructure in the art of Flow of Ideas. Why build a system that only controls the entire plane's water supply, when you can force megagallons of knowledge through hulking glass-and-copper pipes instead? *cackle*