Hello and welcome back to Play Design. Today I'm going to be giving you answers! Well, I'm not going to give you all the answers, but I will be talking about our philosophy behind answers to threats in Standard. Magic Standard philosophy has changed a lot over the years, and as a player I experienced a great deal of it. There were times I was loving it and times I was frustrated by it, and today I'm going to provide some examples from history and give you an idea of the direction the Play Design team is taking Standard.

Years ago, Standard consisted of cards that were over the line in terms of what kinds of cards get printed today. One example I'd like to call out is Reveillark from Morningtide. This creature not only has an excellent rate but is also very flexible. You can hard-cast it and give your opponent a large flier to deal with. If they deal with the creature, then the value you receive from it is very hard for your opponent to come back from. You can also evoke it and get value right away. We had cards in this format like Mulldrifter, Siege-Gang Commander, and Fulminator Mage. Imagine getting Stone Rained many times in a row thanks to Reveillark and a few Fulminator Mages. From personal experience, I can tell you that it was not a fun time.

Despite how powerful this card was, there were plenty of answers that kept cards like it in check. Thoughtseize and Cryptic Command are a few examples that made powerful, expensive creatures undesirable to play. Additionally, an entire archetype, Faeries, dominated the format. Imagine planning out a sweet turn five only to have all of your lands get tapped by Mistbind Clique or have your spell get countered by a Cryptic Command, essentially giving your opponent a "Time Walk." Faeries was "the enemy" in that Standard format, and many decks were pushed out of the environment because the interaction in the Faeries deck was way more powerful than what most other strategies were doing.

Thoughtseize was another card that we had in this format that played an important role in keeping powerful, expensive cards in check. Thoughtseize did so much for only one mana. For example:

The flexibility of this card made it incredibly powerful. It was often correct to play four of these in your black decks, and as a result, expensive spells and synergistic decks were not desirable.

These cheap interaction spells did not make for very fun games of Magic, and R&D scaled back on disruptive cards so that four- and five-mana spells were fun to play again. More power was put in threats and the rates on disruptive spells got weaker. This made the format more diverse as more strategies became viable. As we continued to iterate on this philosophy, it eventually brought its own problems that I will talk about later.

We often get asked why we don't print Doom Blade in Standard. Doom Blade didn't cause any problems on the surface, but it did cause subtle problems that many players didn't see. Doom Blade existed in Standard for about five years beginning with Magic 2010 and rotating out with Magic 2014. Doom Blade was the prime removal spell that players went to if they had black in their decks. The problem, however, was that it was the only spell players went to. It was just the strongest option out there (except during the time when Go for the Throat was around, but that card is extremely similar to Doom Blade in that it kills every creature except for one subset). There was really no reason for players to play other types of removal spells when Doom Blade existed, as it was simply the strongest removal spell.

Not only did Doom Blade give players fewer options when deck building, it also pushed large creatures out of the environment while making black creatures more desirable to play. We still played our Baneslayer Angels, but typically a five-plus-mana creature had to be game-winning to get it into your deck when Doom Blade was around.

Often removal costs less than the threats in a given environment and acts as somewhat of a "comeback" mechanic in Magic. Proper sequencing and lining up the right removal against the right threats allows you to gain tempo and catch up when you're behind. However, if the removal is much cheaper than the threats, then games will become more swingy and be more about who draws their combination of cheap removal plus threat in a single turn. If removal is too weak relative to threats, then games become snowball-y and the player who is behind will often feel helpless and unable to catch up. Here are two scenarios:

You can see how this scenario leaves Player 2 at a huge advantage in a game. Each turn, Player 2 gains a huge amount of tempo and Player 1 falls further and further behind.

The goal is to reach a world where removal is balanced well against the threats in the format. Removal spells these days are not as flexible as Doom Blade and to be honest have been a bit too narrow over the past few years. As a result, we have seen powerful creatures (and planeswalkers) rise up to a point where they dominated their Standard formats and were frustrating to play against. Emrakul, the Promised End is an example of one of our powerful creatures that we intentionally made very strong for flavor reasons. That this creature was over the line and the answers in the format did not line up well with it resulted in its Standard ban. Felidar Guardian had a similar problem. Most of our removal was either sorcery-speed or capped at killing 3-toughness creatures. We didn't have enough answers to the Felidar combo, so that card was banned as well. Since our Standard bans, we have been working on finding the right balance between strong threats and efficient answers.

Ideally the Standard format will have the appropriate answers to the most powerful threats, while also giving players enough options for deck building (avoiding the Doom Blade problem). We don't want answers to be strong enough so that they are auto-includes in your decks and the format is warped around the removal that exists. Answers should be clean, simple, and playable in the main deck in most metagames. We also want to provide options for switching things up when the metagame calls for it.

Vraska's Contempt is one of the removal spells we added to Standard as our clean answer to most of the threats in the format. It's incredibly flexible, and at four mana it's excellent for a control or midrange deck while also cheap enough to be the curve topper for more aggressive decks. We also gave black Duress, an inexpensive, clean answer to noncreatures. Again, while Duress is playable in the main deck, if the format is too aggressive, then you have the option of moving these to your sideboard in favor of more anti-aggro cards.

Sometimes you just want to stop a planeswalker or the activated ability of an artifact, and the color you're playing just doesn't have access to what you're trying to do. Enter Sorcerous Spyglass. It can go in any deck and it shuts down the thing you need to stop. It's a great safeguard against planeswalkers and the new double-sided lands if they are a bit stronger than we anticipated.

The Play Design team is still in the process of shaping our removal spells around the surrounding format, and we'll see the results of our work in future sets, but Ixalan is certainly a good start in getting our answers to where we want them to be.

Last week the Play Design Team welcomed its newest member, Allen Wu. Prior to accepting a contract to join Play Design, Allen primarily played casually on Magic Online, but he qualified for and played in six Pro Tours over the last two years. Pro Tour Ixalan would have been his seventh. He managed to make Day Two of each Pro Tour he played and cashed half of them. His biggest Magic accomplishment is qualifying for his first three Pro Tours via Magic Online PTQ. He started playing in second grade (around Invasion block), his favorite format is 1v1 Commander online, his favorite card is Vendilion Clique, and his favorite decks are Affinity and Legacy Death and Taxes. Allen took a leave of absence from his master's program in management and statistics at Stanford to join R&D for the next year and hopes to offer a unique perspective to Play Design. 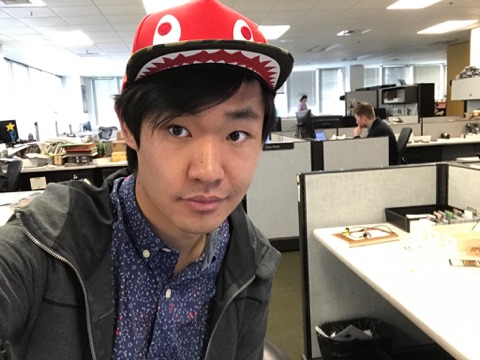 Now that the full Ixalan Card Image Gallery is out, be sure to check out the cards to see how the Standard metagame might shift around the new threats and answers!