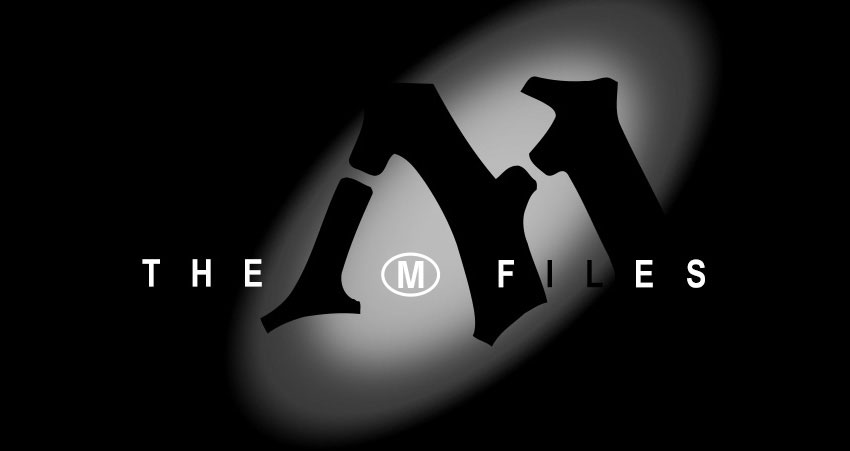 It's multicolor time, folks! In this installment of the M-Files, we finish off Ravnica Allegiance by going through some of the most interesting and thought-provoking design comments our internal database has to offer. If you're new here, members of Magic Design and Development are encouraged leave comments on all the cards currently being worked on.

JDR: This reads like a rare, but a sweet rare.

SPS: Down to three mana

BRH: This card is, as they say, a spicy meatball. We should figure out what it can do for sure.

DSJ: I'd prefer a way to adapt more than once.

ELI: DSJ, do you mean like "can adapt once this turn as though"? (That text is functional if Sam agrees.)

ABRO: That is the text we want, Eli.

SPS: Second line of text that lets you adapt more than once added

Starting off this week with a spicy one! When developing cards that can cut the activation costs of every card ever made by such a significant amount, a certain kind of care is required. Members of design diligently comb through our databases to make sure that nothing in the Standard environment breaks in half. With a full powered Play Design team, more exciting and daring designs can make it through the gates of R&D and into a booster pack near you.

KEN: I'd play this in Riku of Two Reflections.

DSJ: Should we change the text to "Draw a card. You may put a land card from your hand onto the battlefield" just to make land drop tracking easier?

SPS: Now draws first, then lets you put a land from your hand on the battlefield.

ALLI: Seb is a treasure. This art is so great.

As a member of the Simic Combine myself, this card is perfect. I want to draw cards, play lands, and do stuff in my opponent's end step. This pretty package has it all. Making Explore slightly harder to cast but giving it the option to be an instant was a cool change that adds some amount of play to ramp decks. Finally, it can be difficult to track how many lands have been played during longs turns. The functional change to put the land into play as part of the resolution of the spell prevents you from having to keep track of how many land drops you have left in a turn.

ABRO: Love this use of riot

SPS: Changed to hexproof on your turn.

ABRO: Card has been fun, would suggest we add trample.

SPS: Now you also have hexproof on your turn, I won't Settle for less!

Riot is a sweet mechanic. Against other creature strategies, you get to make bigger creatures to win battles. When facing control, you have a bunch of haste threats to damage them immediately after sweepers. Originally, this had to be dealt with by an opponent on their own turn. However, one of the most common ways decks were removing this was with the massive instant-speed sweeper Settle the Wreckage. Sam's elegant tweak was genius.

EEF: Make sure the final template of this works properly with Arcades from M19.

SPS: Changed to attack as though they didn't

SPS: Down to three.

GJ: Review—not sure why the card is blue.

ABRO: Down a mana and gained an untap activation for blueness.

Cards that change the normal rules of which creatures attack and how they deal damage are tricky. Often, designers will put an approximation of the proper words on a test card just to get it into a file and have it be tested. Ethan made sure we synced the words up with Arcades, the Strategist so that there would be less confusion in standard and to possibly have them work in the same deck! Additionally, if we remove the activation here, the card suddenly has no reason to be blue as toughness damage dealing and defender attacking can both be done in white. Excellent catch, Glenn.

Nikya of the Old Ways

SPS: Down to five mana

ABRO: I would actually give this a B, Bryan

MJJ: This card dies to almost everything for a five-mana creature. Can this go to a 4/5 or something?

DGH: This is neat, ya, the golden way

Mana-doubling effects like this generally start with low rates and stats since the effect is so strong. Mons had played this enough to inquire why it couldn't be a bit larger to help it survive, as players would generally try to kill this on sight. Sam agreed. Also, the comments here got just a bit out of hand.

DMUS: Can we get this off exile. It'd be cool to get die triggers and work with GU stuff from last set.

SPS: Now five mana and a one-shot. Didn't want to push the repeatable as a strong card.

ABRO: Back to the old version, one-shot felt weak

PC: Think we need a mana activation here. We can go back to 2/4 if we want to power up the card.

SPS: Back to 2/4 and still no cost to activate.

Now this card really speaks to me. Birthing Pod is a strong card to call back to, and Vannifar does not disappoint. Initially, there was some fear in pushing the power level on something that was based on a card with such an infamous pedigree. Having Play Design in full swing at this time allowed us to push this to the limits and produce something to which the original Birthing Pod would be a proud comparison!

ELI: Now this is Rakdos! Woo!

BRH: This card is awesome.

AP: It would be just like Rakdos to kill my other Demons

SPS: Nor Imps, nor Devils

Even with half the battlefield being wiped out, the show must go on! This card was so perfect that barely anything changed during development. Being safe from annihilation was the least Rakdos could do for his faithful Demon, Devil, and Imp followers.

Rhythm of the Wild

SPS: Now all your creatures have riot. Wording may not be as clear as we'd like.

ABRO: You mean all your nontoken creatures

ELI: Yes, Sam and I discussed that for Domri—you can make different choices or load up on counters. Or hastes if you really, really love haste.

MDT: Fires of Yavimaya! We need to test this.

Another super exciting throwback masterpiece. Gruul needed some competitive ways to beat the control decks, and we got a sweet, new twist on an old favorite. Don't forget, your creatures can have multiple instances of riot, and you can grant both haste and give +1/+1 counters. Or just a bunch of +1/+1 counters if you like. Or, as Eli points out, extra instances of haste, you know, for people who really love haste.

BRH: Is this going to be disappointing doing less damage? Can we add a little something?

ELI: Do you want this to be able to damage planeswalkers as well?

ALLI: Very exciting to have a PW-punching FTK.

SPS: It can do that as well now.

We often use nicknames when referring to certain cards to shortcut explaining their rules text. When a creature comes into play and kills another creature, we call that an FTK. This is based off the card Flametongue Kavu from way back in Planeshift. Perhaps now we will start calling similar cards RFWs?

ABRO: New design aimed to be relevant in older formats

ID: Looks very nice assuming it's at the right power level for Modern.

SPS: CMC instead of power

TOMR: I like CMC instead of power a lot better!

AF: Does the +1 need "if you exiled one 'or more' creature cards in this way"?

It's no secret to anyone that Modern is a popularly played Magic format. So, it shouldn't be a surprise that we sometimes design cards that work well in that environment even if our main focus is generally on Standard and Limited. Kaya interacts with graveyards and very low-cost permanents, two of the key pillars of the Modern landscape.

SPS: Now pay life or sac a creature instead of just sac

KEN: This likely makes the cut in my WB Commander deck.

DEL: "Sac enchantment" added to the list of options for the additional cost

This card was originally just a kill spell that let you sacrifice your afterlife creatures to kill their creatures. We knew Bone Splinters wasn't the most exciting card, so Sam suggested letting you pay some life to cast this if you like turning it into an interesting Dismember variant. After picking up the ability to sacrifice even more things, it began to have its own identity. Mostly, I wanted to include this here to tell you all that I cast this sacrificing my opponent's Captive Audience that they tried to stick me with the other day in an MTG Arena draft, and it was as amazing as it sounds!

SPS: Trying something new. Timetwister where you can gain some life.

ID: Does not look right to me.

ABRO: Talking to MMAJ, he agrees with ID. I agree with them.

SPS: Now a Timetwister with addendum—put a permanent of the same CMC or less onto the battlefield. 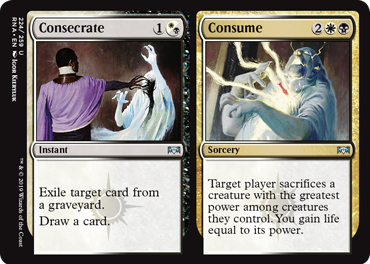 MJG: Most of the split cards have a narrow effect and a broad effect. Love it

ABRO: Nice card here, could be cool for older formats

AW: Pretty nice for FFL, too.

ABRO: Down a mana to sac

One of the most frustrating parts about playing graveyard hate cards is when you draw them the turn right after they get their big threat back in play. With Consecrate // Consume, you can force them to sacrifice their creature even if you miss out on the timing window, and you gain a bunch of life to boot! See ya, Carnage Tyrant.

And see you all next time!