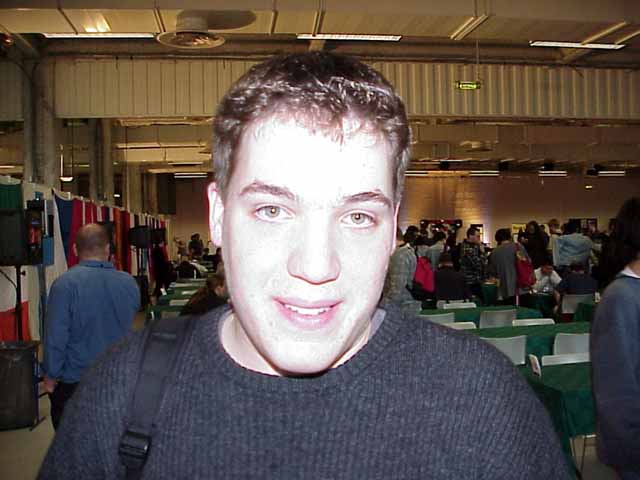 "I did a little bit of roleplaying, and my roleplaying friends introduced me to the game. I quit roleplaying pretty fast after that."

"I traded a couple of really good rares for cards like Fireball."

"I was introduced to the game by people like Frank Adler and Jan Brandenburg, who were pretty good at the time. Frank was a Pro Tour champion, and he quickly wiped away all the misconceptions I had about the game."

"Booster and Rochester Draft. You don't have to prepare your deck for hours, and your success is less dependent on pairings although there still is some luck factor. Also, Extended is a good format if there aren't too many broken combo decks like Trix."

"High Tide. I won the GP Vienna with it, and it was also largely responsible for me making top 8 at worlds. Finkel built the deck to win on turn three or four, but my deck was slower and more controllish. I usually won on turn ten or so."

"Gary Wise, because he's shouting all the time during the match. He's really funny."

"Jon Finkel. I haven't played against him much, so can't say anything specific about his play, but just by his results it's clear that he is by far the best player in the game."

"I like Wildfire and Tangle Wire. If you play Wildfire, you can completely get control, because your opponent will only have a few permanents left. And Tangle Wire gives you a really unfair speed advantage."

"The Rebel/Mercenary recruiting mechanic. I like the idea of getting card advantage by recruiting up or down through your deck."

"I was happy to see Dirk Baberowski beat Casey McCarrel in Pro Tour Chicago 1998. He is a good friend of mine, and it was his first Pro Tour. It was really amazing to see him do so well in the finals."

"When I beat Raphael Lo Moro's Stompy deck in the semifinals of Worlds, I won enough Pro Tour points to be Player of the Year. And I knew that I would have a big advantage in the finals."

"Denmark. It's an amazing country, it's clean, and the people are really nice. Paris, on the other hand, is dirty, and the only thing you can eat here is crabs."

"I play every day on the Internet, using IRC. I also play with real people, every other day, for three to four hours at a time. There are not that many people to play with in Cologne, unfortunately."

"I get all my decks from my team, the Euro Alliance. Usually Jon Ormerod and Ben Ronaldson. Jon came up with Necro-Pebbles and Trinity Green, decks that really shaped the environment."

"I was really happy to hear about the introduction of the Masters series. This will allow a few of the world's best players play Magic full-time. Before it was tough to take off a year to just play Magic, but now if you have the Pro Tour points it is possible."

"I play a lot of football, and I hang out with my friends."