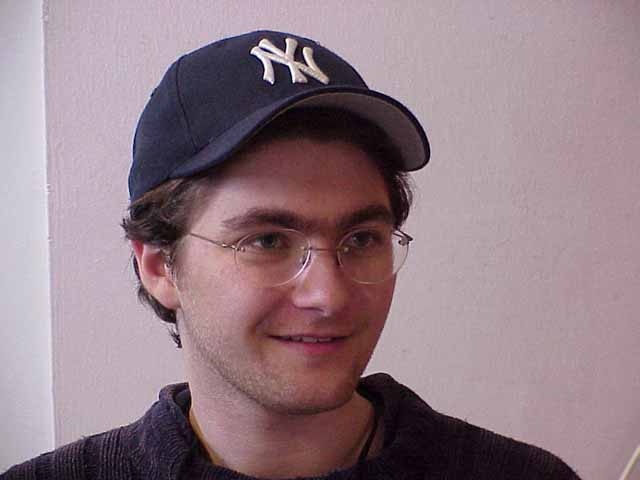 "Five years ago, a friend of mine bought some boosters for me a present. We immediately got hooked and we played all night. The next way, we went out and bought some more boosters. We didn't know how many people played the game, so we just learned it on our own.

"I thought Craw Wurm was stunning and Nightmare was the greatest card ever. I turned down really great trades for Moxes."

"Ollie Schneider and Chris Manners; I met them both through Magic. They were much better than me at the time, and I never could have gotten where I am now without their influence.

"I really like Constructed formats, and my favorite format of all is Extended. I like it because, of the commonly played formats, it has the biggest card pool to build from.

"I came in seventh at Chicago with the Necro-Pebbles deck. Only the English guys had it, and it was a unique and really well-made deck."

"Probably Dan Paskins. He's fun to play against, and he's a really amusing guy. Whether I win or lose, I'll always enjoy myself when I'm playing against Dan."

"Jon Finkel is the best player. He's had the best results and has earned the most money. He also sees things in cards that other people just don't see."

"Counterspell, because I like the idea of having that much control over the game; it literally stops any spell. Necropotence is another one of my favorite cards, mostly because it's really powerful when you play it right. It's a fun card to play with, as long as it's on your side."

"Buyback. The cards that use buyback were just really good cards, both for Limited and for Constructed."

"At Worlds 1999, Marco Blume was playing a Covetous Dragon deck. He got off to a really fast start, and had about six mana by the third turn. He cast a Dragon, except... he forgot to play the artifact in his hand first. The Dragon died because he controlled no artifacts, and he quickly lost. Poor guy."

"The Necro Pebbles deck was the best deck at PT Chicago, and I proved that by making top eight."

"I really enjoyed going to Grand Prix Tours-the venue itself was fantastic. Also, at GP Cannes, the final eight was held on an island, in a big castle. You had to get there by boat. That was awesome."

"I was part of the team that built Cocoa Pebbles, along with John Ormerod, Warren Marsh, and Ben Ronaldson."

"Although I'm well known for coming in seventh at Pro Tour Chicago, I'm also very proud to have come in #1 in the Swiss at Euros 1998. I had an impressive record of 10-1-1.

"I used to play an awful lot, but recently I've become a bit lax. I only play two or three times a week, for an hour at a time. I frequently sit back and watch when I'm playing with a few other friends. We usually play Constructed deck formats."

"The creation of the Masters series is probably the best thing Magic has seen in a long time. It allows people to take Magic very serious level. People who are very good at Magic are now able to consider playing it professionally.

"I'm known for being reasonably lenient about things and not playing particularly strictly. I think I'm a pretty good player, but I'm not 'Tier One' yet."