hen Magic started, the minimum deck size was forty cards, not sixty. And there was no four-of rule. If you wanted to make a Constructed deck, you were free to take twenty Black Lotuses, nineteen Timetwisters, and a Lightning Bolt if you wanted to. That example would probably involve a lot of shuffling, but you can go ahead and think of other degenerate decks on your own.

So Wizards of the Coast invented the Duelists' Convocation, which invented the sixty-card limit and the four-of rule. But everyone wasn't sold on it and a few other ideas were thrown around. So here, from Duelist #9, are the proposed point-based deck-building rules.

Note that these are not the current rules. They were printed in February 1996 and might never have been used. But if you want to construct your own deck that conforms to this hypothetical system, remember that Homelands has just come out. 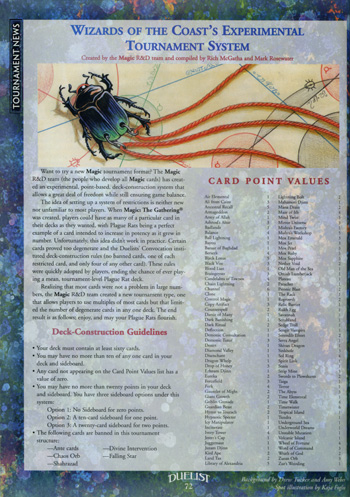 Want to try a new Magic tournament format? The Magic R&D team (the people who develop all Magic cards) has created an experimental, point-based, deck-construction system that allows a great deal of freedom while still ensuring game balance.

The idea of setting up a system of restrictions is neither new nor unfamiliar to most players. When Magic: The Gathering was created, players could have as many of a particular card in their decks as they wanted, with Plague Rats being a perfect example of a card intended to increase in potency as it grew in number. Unfortunately, this idea didn't work in practice. Certain cards proved too degenerate and the Duelists' Convocation instituted deck-construction rules (no banned cards, one of each restricted card, and only four of any other card). These rules were quickly adopted by players, ending the chance of ever playing a mean, tournament-level Plague Rats deck.

Realizing that most cards were not a problem in large numbers, the Magic R&D team created a new tournament type, one that allows players to use multiples of most cards but that limited the number of degenerate cards in any one deck. The end result is as follows; enjoy, and may your Plague Rats flourish.