that was a long break! I hope everyone reading this had a great holiday season and a happy New Year. For me, January 1, 2005 was as magical a day as they get: after hanging with my new daughter and wife, and hiking around Fort Tyron Park and the Cloisters, and dropping by Starbucks for an iced tea, I sauntered into Neutral Ground late in the afternoon and drafted me some Champions of Kamigawa. I chose and sculpted two of the most insane U/W decks I have ever seen... and went a combined 1-5 (see the second part of this article for the much more relevant gaming that was going on in the background). But it was good times.

Before getting into this week's Swimming with Sharks proper, there is some old business we have to clear up. We had a bit of a puzzle in 2004's last installment: Throwing it Back One More Time. The puzzle asked what (additional) deck served as the unique inspiration for my mono-blue deck (and who designed it). I checked the forums: no one got the answer right.

It did warm my heart to see one poster point out Eric (sic) Lauer's Ghost Ship deck. Erik Lauer is considered to be the originator of the Big Blue archetype, and the deck that served as the unique inspiration for my version of mono-blue was a descendent of Lauer's deck... but wasn't Erik's specifically. 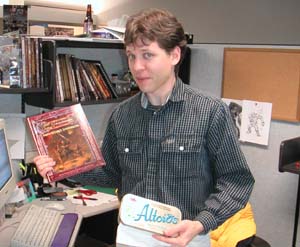 In addition we had the hint that the designer in question shared something with "at least five" of the credited deck designers in the article. Turian, Comer, Schneider, Wollpert, and Buehler all work for Wizards of the Coast. So does the answer to the puzzle.

Last of all, I said that it wasn't superstar tournament organizer and judge Mike Guptil.

Here is the deck that served as the "unique inspiration":

4 Dissipate 4 Counterspell 4 Force of Will 2 Inspiration

Deck building is often a game of inches

What's unique? Mike played two Inspirations... just like I did with the deck in question in Columbus. Is this a small thing? It sure is! But small innovations like Mike's playing Inspiration are the building blocks to increasingly tuned deck design. Changes like this one are the difference between playing Ornithopter or Scale of Chiss-Goria to help your Affinity… or playing Aether Vial. They might not look like much at first glance, but they really do make a difference, and can pave the way for better and better decks down the road.

A lot of people emailed me asking why I ran Inspiration instead of Counsel of the Soratami. Inspiration is an instant of course! (Successful blue mages tend not to tap mana on their own turns if they can avoid it.) While Erik Lauer is properly credited with the Ghost Ship archetype (especially the inclusion of Wall of Air), Mike moved away from Lauer's Ancestral Memories to a slightly cheaper (if less powerful) card-drawing engine that he could play on his opponent's turn.

But why mention Mike Guptil?

Mike's brother Jeff wrote a tournament report about this deck (which he got from Mike). Jeff won a Beta Black Lotus with the deck; his co-finalist, Mike Guptil, won himself a Beta Mox Pearl. This tournament took place in 1997, but Mike and Mike would eventually go from playing in events like this to the other side of Magic. They did great things together and apart as tournament organizers, like running or judging each other's events. Even though the Donais tournament report ends with Guptil having to go to work at 7am, Guptil today works for himself, running Professional Events Services.

If you want to check in on some Jurassic Magic lit, don't miss Jeff's report on this deck from the Dojo days.

So Jeff got the Beta Lotus and Mike Guptil got the Beta Pearl, two of the cards that compose the Type I "Power Nine." On New Year's Day, in 2005, Neutral Ground New York ran a local tournament of its own, this time for a Time Walk.

The Neutral Ground tournament was surprisingly stacked, drawing 47 players on a national holiday (20 more players than the same format Grand Prix Trial the next day, where Josh Ravitz took home the byes). 47 players is great for a local store tournament by any measuring stick; because of tournaments like this one, we get to see a sneak preview of what the Extended PTQ environment is going to look like:

When looking at the final eight, I assumed that Alvarado won a series of easy matches (Reanimator, Reanimator, Life), but John beat Red Deck Wins in the Top 4. The main differences between his deck and Nick West's are Shivan Reef (giving him a way to play Fire/Ice straight up) and the blue enchantments in the sideboard. Now that Affinity is out of the bag, more Energy Fluxes are probably necessary (I think Affinity will be one of the most popular decks of the PTQ season... Besides being the most powerful aggressive deck of all time, a lot of people have their cards left over from this past Championship Season and summer PTQs); Red Deck Wins is a really difficult matchup for Scepter Chant, but Chill – especially on turn one – can make a big difference.

Phil Johnson's Life deck has an innovation that is simply awesome: Aether Vial. In the PT Columbus coverage, Osyp Lebedowicz and I discussed Aether Vial and came to the conclusion that it makes all kinds of creature decks better, not just Affinity. People play Aether Vial in Goblins and White Weenie... why not Life? Aether Vial does a lot of things for Life that aren't immediately obvious. Because Life is a creature-based combination deck, it often has to hold its combination pieces until the turn it wants to go off (whereas most creature decks play out their creatures as they draw them). It can't, for instance, play a naked Nomads en-Kor on turn one, because it isn’t interested in beatdown and it can't afford to lose that creature to a random Firebolt if it doesn't have a Task Force out. Aggressive decks tend to beat Life only because it stumbles on mana; oftentimes, a deck like Red Deck Wins will take out Life in a game where Life has the combo just because a Rishadan Port or Pillage prevents Life from having enough white mana to play out Nomads en-Kor AND Worthy Cause in the same turn. With Aether Vial this is much less of a problem. Moreover, against a deck like Scepter Chant, Aether Vial can go a long way. Imagine Nick West's baby has an Isochron Scepter with Counterspell on it. Life can't really test spell out a Scepter Chant deck in game one. But what if it has two Aether Vials in play?

Vial out Nomads en-Kor; Vial out Daru Spiritualist; give the Spiritualist a huge butt; sacrifice it to Starlit Sanctum for a million life. While West played a single Stifle in his sideboard, most traditional counters won't prevent this combination. If the Life deck has a redundant combination piece – which it probably will before the offensively slow Scepter deck can kill it – that unlikely Stifle isn’t going to win the game anyway. It is also important to note that Aether Vial gets around pesky Meddling Mages in both Scepter and Affinity.

Both of the Red Deck Wins decks ran Lava Dart. An interesting choice by Collin Slattery was to sideboard Overload. Neither player ran Pillage like Shuhei Nakamura in Columbus, but Slattery filled that spot with Overload. On the plus side, Overload is a one-mana instant; even on three mana, Overload is generally better than Pillage at

(and instant speed). On the downside, it has a lot more problems with a boosted Myr Enforcer, and can't destroy a Starlit Sanctum.

The Reanimator decks were very much in the spirit of Gadiel Szleifer's Top 8 deck from Columbus, at least in main deck. Their sideboards, though, show the difference between a PT format and a PTQ format. While Gadiel didn't necessarily know what was going to show up, Neutral Ground's Reanimator players both packed more Echoing Truths for Ensnaring Bridge and Energy Fluxes for Affinity.

Last but not least, Ashok Chituri went a very unexpected direction with his U/G Madness deck. While very similar to Geoffrey Siron's on the numbers (two Chrome Moxes, 20 lands, 1 Merfolk Looter, 1 Thought Courier, etc.), Chituri replaced Yavimaya Coast with City of Brass and a Forest with a Wooded Foothills. These changes are functionally identical to Siron’s deck, down to the number of what we would typically consider “pain” lands, but have serious life total implications over the course of many games and many turns. Chituri can't heedlessly tap his City of Brass for colorless mana like a Yavimaya Coast, and decks with Rishadan Port can work him over if he gets the wrong draw. On the other hand, while City of Brass and Wooded Foothills might be worse against an opponent like Red Deck Wins, Chituri gets the mighty Flametongue Kavu out of the board. Is Flametongue Kavu -- his only red spell -- so good that it makes up for the mana changes? We'll have to watch upcoming tournaments and see.

I love the beginning of a new constructed format. It's kind of like a new year, all expectation and possibility. I have a feeling that we're at the start of a good one... on both counts.