The Magic: The Gathering Pro Tour travels to the Netherlands for Pro Tour–Amsterdam! Truly the crown in the Magic tournament circuit, the Pro Tour is a four-day Magic festival offering something for everyone whether you’re new to the game or a seasoned World Champion.

There will be a whole lot more than just the main tournament taking place! Magic fans of all ages and experience levels will find something waiting for them at Pro Tour–Amsterdam. Come to the Assault on Mirrodin party Saturday night for an exclusive look at Scars of Mirrodin cards and art! Try Public Events, tournaments open to all offering fantastic prizes throughout the weekend. Face off against Magic celebrities in the Champions Challenge, or mingle with prominent Magic artists as they sign cards for fans all weekend long. Get a glimpse into the pro lifestyle while seeing some of the game’s best in action live and up close. Whether you come for one day or the entire weekend, Pro Tour–Amsterdam offers you the opportunity for an unforgettable Magic experience!

Pro Tour–Amsterdam is an Extended / Magic 2011 Booster Draft format event with an Extended Top 8 that runs September 3-5, 2010. The Last-Chance Qualifier is Standard and will be held at 4 p.m. on Thursday, September 2 at the event site, with the top four finishers earning a spot in the main event. For more information, visit the complete Public Events schedule.

The capital and largest city in the Netherlands, Amsterdam began as a small fishing village but later grew into one of the most important ports in the world. The historic canals criss-cross the city in four concentric circles, combining to form more than 100 kilometers of waterways with 1,500 bridges. Amsterdam receives more than 3.5 million tourists annually.

Amsterdam is home to numerous museums, including the Rijksmuseum, which features many of Rembrandt's famous works. Van Gogh's short residence in Amsterdam is marked by a museum showcasing his early work. The Stedelijk Museum located next to the Van Gogh museum is the city's largest display of modern art. Amsterdam also features a rich architectural heritage and a vibrant nightlife.

The main event at Pro Tour–Amsterdam is a three-day Extended and Booster Draft format event with an Extended Top 8, with a prize purse of $230,795. For more information about the format, main event registration, schedule, and prize payout, click here. 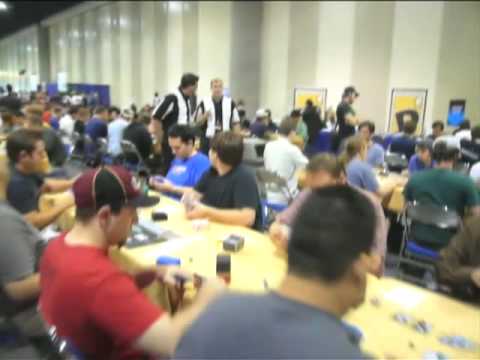 An Insider's Guide to the Pro Tour

We know you’re a fan of the Magic: The Gathering Pro Tour; now you can make it official! Catch the Pro Tour on Facebook. Become a fan, find out about new updates to the Pro Tour, view exclusive photos, share your story with the community, and more!

Please send an email to press@wizards.com if you wish to set up a press credential for Pro Tour–Amsterdam. Wizards asks that all media requests be submitted by August 20 (two weeks prior to the event).

ASSAULT ON MIRRODIN PARTY
Want to be the first Magic players in the world to see preview cards and art from Scars of Mirrodin? You won't want to miss the Assault on Mirrodin party Saturday night. At approximately 9 p.m. on Saturday, the event hall will transform into a nightclub featuring a live DJ, Magic-themed puzzles and activitles, and free food. The party runs until midnight and is open to the public.

PUBLIC EVENTS
Come one, come all to participate in four days of events open to the public. Starting Thursday with the Last-Chance Qualifier, there are tournaments, drafts, EDH, and open dueling all weekend, plus the WPN Championship–Amsterdam. More information on Public Events will be posted soon. Pro Tour–Amsterdam will also play host to a few extra-special events, such as a Pro Tour Qualifier, the €2,500 Draft Challenge, the WPN Championship, Super Friday Night Magic, and the Magic Online Live Series Championship. Prizes include airfare and accomodations at the first Pro Tour in 2011 (location TBD), iPads, premium foil card sets, an iPad, iPods, Power 9, and much more!

CHAMPIONS CHALLENGE
Test your Magic skills against Wizards of the Coast R&D members Mark Gottlieb, Steve Warner, and Dave Guskin. Win and you can walk away with cool Magic prizes! Previously announced to be in attendance, Aaron Forsythe will not be at Pro Tour–Amsterdam. Wizards apologies for this change.

ARTISTS ON SITE
Prominent Magic artists rk post and Igor Kieryluk will be on hand for free signings of your favorite cards, plus you’ll have the opportunity to buy prints and even original artwork. The Artist Booth is open from 10 a.m. - 5 p.m. Friday - Sunday.

WATCH THE TOP 8
All of Sunday's Top 8 action can be viewed on screens in the hall, with Pro Tour Statistician Rich Hagon and Pro Tour Historian Brian David-Marshall providing the commentary. Sunday's action begins at 4:45 a.m. ET, and is available as a webcast from the comfort of your own home. 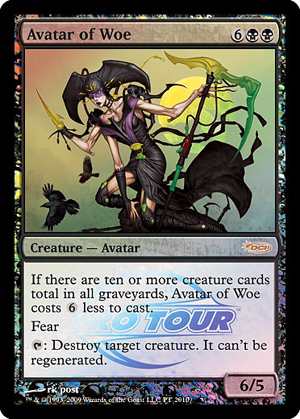 Come by the Wizards Information Booth at Pro Tour–Amsterdam and get your premium foil copy of Avatar of Woe (while supplies last).