someone who has been fortunate enough to play regularly at high-level Magic tournaments, I often have to field questions from the aspiring tournament players, as well as others interested in learning more about the scene. One of the most common yet difficult to answer questions is the vague “how does it feel to be playing on the Pro Tour?”

For a player participating in one of his first Pro Tours, or someone who has just qualified after missing several events in a row, the foremost feeling is that of accomplishment. To get there, one must usually win a Qualifier tournament. Qualifiers are held throughout the world and it is common – at least in United States – for one to gather over a hundred participants. Only the overall winner gets the coveted invitation and there are dozens of excellent players who keep finishing in the top 8 but for years miss that final win or two that would let them go to the Pro Tour.

Players like that often qualify at the Grand Prix – where they do not need to clinch that last match to qualify. Instead, top 8 previously unqualified players get the invitations. Since so many of the Pro Tour staples compete at Grand Prix events, that means you can finish 12th or sometimes even as low as 18th and get to go to the Pro Tour. Grand Prix also award highly rated players by providing them with byes – free wins in the early rounds.

Speaking of rating, it is the third and final way to qualify for the Pro Tour. Top DCI ranked players in the format that the Pro Tour is being played in get invites. For example, Constructed rating will be used to determine invites to Pro Tour: Columbus, which utilizes Extended format.

Once a player’s quest to qualify for the Pro Tour is complete, he would be well advised to match the feeling of accomplishment with at least some anxiety. He is now set to face off against several hundred of the world’s best Magic players, many of whom will have spent hours to prepare for the event. 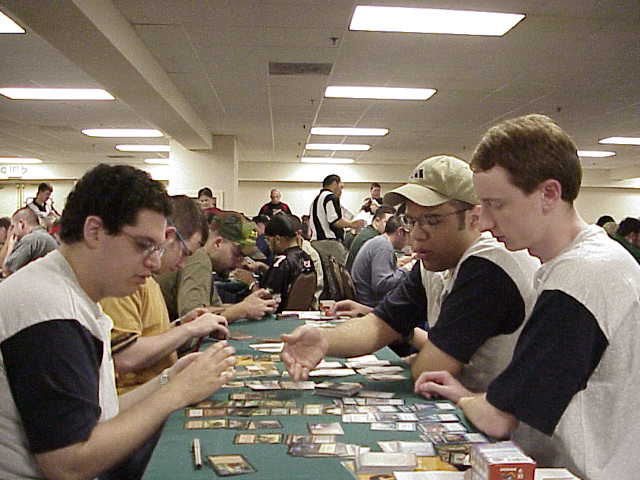 It is this preparation that is largely responsible for how well you might do on the Tour. Most players work in teams – some well known groups include TOGIT and Your Move Games. Teamwork is extremely important as no one player can truly understand the format on their own within a few short months allotted. A great success story of such teamwork is that of team Bandana that was formed by the South American players, originally to practice for the 2002 World Championship in Sydney. Pros from Argentina, Brazil, Chile, Uruguay and Venezuela practiced together to prepare for this tournament’s multiple formats. In the end, it was Brasil’s Carlos Romao taking home the trophy and his teammate Diego Ostrovich coming in third (the two faced each other in the semi-finals). Bandana members’ deck of choice for Standard was Psychatog. Although this was a very well known archetype, top 8 match coverage showed that they were extremely adept at playing the deck and it was their understanding of the mirror matchup that gave them a significant advantage over the better-known pros they faced along the way.

Pro Tour teams are a never-ending soap opera. Groups form and re-form for almost every constructed Pro Tour. Perhaps the oldest existing team is Your Move Games. Originally formed by Rob Dougherty and his friends (and named after Rob’s Boston store) the team has been around for almost as long as the Pro Tour itself, but even YMG has recently seen its decline as most of its prominent members fell off the Pro Tour or even left the game to pursue careers. Today’s most notable team may be another East Coast conglomerate called TOGIT (after New Jersey game store The Only Game In Town). It features such notables as Eugene Harvey, Osyp Lebedowicz and the most recent U.S. Grand Prix champion Jon Sonne.

Teams tend to test their decks in secret, and it is never more relevant than in the Extended format, where the card pool is so great that it is almost impossible to figure out all possible combinations. Often there is a powerful deck that escapes virtually everyone, and benefits those who figured it out greatly at the Pro Tour. Last year, Uri Peleg broke the Extended format by adding an obscure green rare Food Chain to the Goblin decks. Although it made for an extremely powerful strategy, no one else thought of the idea because Food Chain isn’t a card that many considered tournament viable even back when it was first released, let alone a few years later. It will certainly be interesting to see if similar developments benefit a creative team in Columbus this year.

Although there is far less secrecy in testing for Limited events, preparation is just as important. Pro players tend to work across team lines for those events, setting up drafts both online and live. Even in Limited formats, players can often figure out great uses for obscure cards. Some pros drafted Jinxed Choker highly, while it is scoffed by most others, because their testing showed that it is actually quite powerful in aggressive decks.

Once you get to the Pro Tour, it feels really great to be there. For the regulars, it is an opportunity to hang out with friends whom you get to see once every few months. I can’t speak for others, but the most memorable and important part of any Pro Tour for me are the dinners that you end up going out to at the end of the day – usually with a different group of people every time. You catch up with old friends, gossip about the tournament, and strategize for the next day of competition.

The current tournament is structured so that everyone with a record of 4-3 or better advances to day 2. Competitors are in for a full day of tough playing, usually finishing up no earlier than 8pm. Those who qualify for day 2 play about the same amount of time on Saturday and eight players with best records advance into the top 8.

For those eliminated in the first two days of competition, there is still plenty to do. The most popular side event for those who played on Friday is always the Pro Tour Qualifier held on the next day. For obvious reasons, PTQs held as the side event at the Pro Tour are some of the toughest, and it is almost always that one of the previous day’s competitors wins the invitation over the local players. This should not discourage you as the local player from participating though – after all, these are the same people you are going to face off against if you do qualify for the Pro Tour, so one of the first steps to becoming a pro should be not to fear intense competition.

For those who are not qualified for the Pro Tour and those who only get to play on Friday, there is a plethora of side events available over the weekend. Most notable is the $2000 Amateur Challenge. This tournament is only open to players who have zero lifetime pro points, so if you think you are a rising star but have not proven yourself yet, hurry and sign up for this event. Another extremely fun side event is the Unzipped tournament – a sealed deck event utilizing Unglued and Portal cards, with Unhinged product used as prizes.

8-man draft and constructed tournaments will be run throughout the weekend of course. Ohio has always been known for its huge turnouts for events like Regionals, so this Pro Tour should have a ton of people show up. If you are looking to complete that Tempest set or find opponents to play in a 5-Color-format, or do any of the other things you can’t do at your local game store, make plans to attend PT Columbus this Halloween weekend.

It's time for a set like none other—and a new way of playing one of the most popular formats in Magic. When I first had the idea for a Commander Draft format nearly six years ago, I wasn...