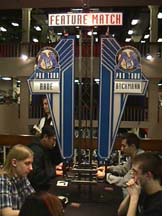 The two young and talented players met in the last round of the first draft. Bachmann was 2-1 with his heavy black deck with a splash of white, while Råde had managed to go 2-0-1 with his blue and green deck.

Råde won the die roll, and chose to play. He summoned a second turn Albino Troll, while Bachmann played swamps and cycled. Bachmann cast a Looming Shade, a dangerous creatures when you play heavy black, but Råde had a Hermetic Study and enchanted his Troll to kill the Shade.

Bachmann got rid of the Troll with a Befoul, and followed up by playing a Bog Raiders and a Phyrexian Ghoul while Råde paid the echo cost of an Acridian. Råde stalled on four lands for two turns, but cast a Hidden Spider and a Treetop Rangers. Meanwhile, Bachmann got to seven lands and slapped down a Pestilence.

The Pestilence quickly killed Råde's Rangers, but Råde had another trick up his sleeve, a Gaea's Embrace. Råde enchanted the Acridian and brought Bachmann down to eight life, but Bachmann had a Corrupt that took Råde down to three life, and finished him off by activating Pestilence three times by casting a Dark Ritual.

Råde chose to play in the second game, but had to mulligan once as he had only one land in his opening hand along with several expensive spells. His next hand was better, and the Swede started by casting a first turn Pouncing Jaguar that started hitting Bachmann for two every round.

Bachmann got out some creatures and traded with Råde, and again, he played a Looming Shade. This time, Råde couldn't deal with it. Råde Power Sinked an Order of Yawgmoth and played Gaea's Embrace on a Treetop Rangers, but Bachmann had what he needed. He Befouled the Rangers and started Looming Shade attacks, while Råde struggled, again drawing few lands.

Råde cast a Horseshoe Crab and a Winding Wurm, but both had to block the growing Looming Shade. Unfortunately, Råde didn't draw any creatures to replace them, and the Shade and two Bog Raiders delivered the final blow.