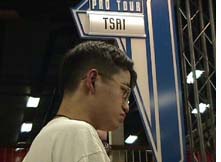 The two Americans met in the second match of the second draft. Hacker had drafted an extremely strong black and green deck, including two Pestilences, a Dark Hatchling, a Diabolic Servitude and a Corrupt, while Tsai played a three-coloured deck.

Tsai went first, but didn't get to play a creature before turn four. Hacker went out strong, he played a turn two Flesh Reaver, a turn three Wall of Junk and a turn four Pestilence. Tsai's Monk Realist took care of that Pestilence, but it didn't help much as Hacker played another one the following turn.

Hacker cleared the table, but lost his Pestilence when Tsai Path of Peaced his only creature, the Flesh Reaver. But Hacker had more good cards to play. He summoned a Winding Wurm, a Hollow Dogs and a Dark Hatchling, and recycled his creatures with a Diabolic Servitude, gaining massive card advantage.

Tsai struggled, but was able to survive for a couple of more rounds by playing a Lightning Dragon and a Waylay followed by a Congregate. Still, he couldn't outrace Hacker's creature rush, and eventually, he had to capitulate.

Tsai chose to play in the second game as well, and things looked good as Hacker had to mulligan twice. Both players had slow starts, Tsai got out turn three and turn four Sanctum Custodians while Hacker played his first critter during turn four, a Cackling Fiend.

DeadGuy Tsai answered by playing two Viashino Outriders, putting pressure on Hacker who once again recycled his creatures with Diabolic Servitude. Hacker's Wall of Junk also slowed down Tsai's attack, and he also drew a Winding Wurm that stopped the Outriders dead in their tracks.

During the mid-game, Tsai was unable to cast enough threats to outrace Hacker. In spite of the two mulligans, Hacker was able to gain control by killing Tsai's two Sanctum Custodians with a Befoul and a Dark Hatchling. Then he started attacking with his fatties, and suddenly, Tsai was on the defense.

The DeadGuy bought himself some time by casting a Soul Sculptor and a Congregate, but Hacker's large creatures quickly brought his life total down again while a Corrupt took care of the Soul Sculptor. Tsai made a last attempt to win by enchanting his last Outrider with a Shiv's Embrace and attacking, bringing Hacker down to nine life.

Hacker's Winding Wurm was at this point an enchantment, and in order to win, Hacker had to cast a creature to turn it into a creature again. He drew a Polluted Mire, cycled it - drew a Sicken, cycled it - and smiling with relief, drew a Blood Vassal, attacked and won.