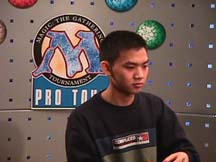 Pro Tour Los Angeles is Lucien Bui's first Pro Tour ever. But the 18 year old French High School student wasn't afraid of playing against the big name-players. Quite on the contrary, Lucien beat one opponent after the other and ended up as the top seed in a star-studded Top 8.

"It's very good, but I hadn't expected this," Lucien admits. "I just played as I usually do. Normally, I prefer green because of the good creatures, but I also like red and black. But I can take any colours."

Lucien started playing Magic just after Ice Age was released. He saw a brief report about the game on TV, and a friend of his played, so Lucien and his friend started playing together.

"I am very competitive, and I like winning. When I win, I enjoy it, but when I lose, it isn't important. So I'm not nervous before a tournament," Lucien explains.

The money that he'll win in LA will also be useful for the young Frenchman. They will pay for his future travels to Pro Tours, and Lucien also has some bills to pay as a friend has paid the trip to LA for him. In addition, the top eight gives him important Pro Tour points. His French friends were also very happy for him. "Now, I just have to try and do my best," Bui says, smiling.

It seems that sometimes, the news of your death can be greatly exaggerated. In this case, it had been assumed that perennial Pro Tour player Mike Long had retired to run his game shop in Charlottesville, Virginia. The winner of Pro Tour Paris skipped Pro Tour Rome and only came back to play the Duelist Invitational in Barcelona after receiving his invite for being the highest composite rated player in the world. Fighting his way through the world's best, he beat Sturla Bingen in the finals and speculation as to whether or not he'd play Pro Tour Los Angeles began. Not until the last minute did he decide to make the trip.

The veteran of several Pro Tour Top Eights and a member of the United States Nationals team three times, Long won his first draft pod 4-0 and finished the day at 6-1. Going into day two, he needed to put together a 5-1-1 record to have at least a tie-breaker chance. With an amazing draft that saw him corner Green and Red early, it looked as though he'd sweep his first pod of the day. However, playing against Brian Fenwick in the 11th Swiss round, Long made a huge mistake, using an Arc Lightning to do one point of damage to a Looming Shade and two to his opponent. The problem was, the Shade had been pumped to 5/5 (Long's creature, which had been blocked during combat, had only dealt 2 points of damage to the Shade). With the Shade still alive, Long couldn't press his attack and suffered his first loss of the day.

After the second draft, he was paired against Top Eight finisher, Patrick Chapin. After getting trounced by Chapin's three Corrupts, Long had to win his next two matches to break into the final eight. His last two opponents were Gary Wise and Erik Lauer. After defeating each opponent in two hard fought matches, Long said about making the finals, "The Top Eight of a Pro Tour is so amazing." With a victory here, Long could become only the second player in Pro Tour history (behind Tommi Hovi) to win two Pro Tour events. 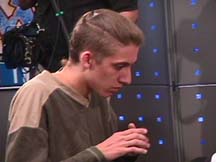 According to the eighteen year-old Patrick Chapin, preparation was the key to his Top Eight finish here at Pro Tour Los Angeles. "I prepared quite a bit, netdrafting regularly on #MTGPRO. I have to thank them for their high level of competitive drafting, especially Gary Wise and Nate Clarke." In what has become a tradition among the top players in the game, a destination is set the week previous to a Pro Tour and players are invited to come and practice. This time, the site was in Pittsburgh and the team doing the invitations was Team CMU. "CMU's weekend was amazing," said Chapin. "All the players (professionals) from New Jersey, New York, Ohio, Michigan, and Pittsburgh were there. Overall as a group, we did better than any other group in the world." Other than the invitation weekend, Chapin and friend Eric Taylor drove down from Eastern Michigan University (5 hours) to test with the CMU guys over the course of several weekends, as well as drafting at local stores Neutral Ground Detroit and Campus Collectibles (Ann Arbor, Michigan).

Chapin, making his second Top Eight appearance (Top Eight Pro Tour New York 1997), described his drafting style as, "I do a lot of friendly drafting to get people (draft neighbors) to commit to colors." This strategy led him to a 5-2 record on Day One and a perfect 7-0 on Day Two. With confidence level on high, Chapin expects to finish high. 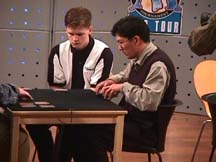 A twenty-eight year-old native of Vancouver, Canada, Terry Lau has high hopes going into his first Pro Tour Top Eight. "Canada is going to dominate this Top Eight," said the confident Lau. "You can take that to the bank!"

A sales engineer, Lau attributed his drafting success to weekly trips to Mishra's Game Factory (in Vancouver) and help from his teammates Jeff Fung, Ryan Fuller, and Pete Radonjic. "It feels pretty damned good to be in the Top Eight," said Lau. "All my teammates have been there or close. It's nice to be up there with them. I'm looking forward to the draft." As for his drafting style, Terry summed it up as, "Draft the colors that come to you. Very rarely force colors."

Terry's skills shined through during the first day of the draft. Going 4-0 in the first draft, Lau said, "I was lucky to ride three Zephid's Embraces to a perfect start. It was a seven man pod, so the decks were better. At his second drafting pod, Lau drafted a Green/Black deck with fast/cheap creatures with a little bit of removal to overwhelm his slowly developing opponents. His 3-0 record at the end of the second pod gave him a 7-0 record on the day, good enough for 1st place atop the standings going into day two. 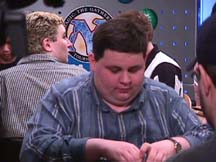 One of four 1999 Barcelona Duelist Invitational invitees in the Top 8, Steve O'Mahoney-Schwartz is one of the more respected players in the game. The first player ever to win two Grand Prix events (Zurich, Madrid), as well as three other Top Eight Grand Prix finishes (Rio 2nd, Boston 3rd, and Toronto). His history at Pro Tour events has been stellar as well (2nd PT Germany, Top 32 Paris and Los Angeles '97).

A Boston University student, eighteen year-old Steve was able to go home over the course of several weekends to practice with his drafting group of Hashim Bello, Jon Finkel (also in Top Eight), Mike Lucarello, and David Price). Working together, they came up with the Four by Four theory, where the drafter tries to draft Red, Green or both, then choose sixteen creatures based around their casting cost. The goal was to get four creatures that cost one, two, three, and four mana. This allowed them to achieve a good mana curve, allowing for early and consistent beatdown. In addition, depending on the color they drafted, Symbiosis or Arc Lightning was a preferable support card. This strategy worked fairly strong, as all the above mentioned playtesters made the second day of the Pro Tour.

In fighting his way through the Swiss rounds, Steve's toughest match was against his brother. "One of the closest matches I had was against my brother," said O'Mahoney-Schwartz. "I felt really bad about it because I got paired down against him." Another strong match was in the 11th round against undefeated Terry Lau. "I barely won with virtually no time left in the match." 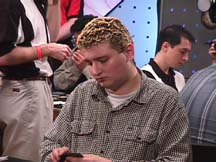 Jon Finkel, 20, is a well-known name in the Magic environment, and for a long time, Jon has impressed the world by his good and consistent performances. In Los Angeles, he showed once again that he is one of the world's most outstanding players by making yet another top eight.

Even though a lot of players expected to see Finkel in the Top 8 again, Finkel himself didn't really believe that he would make it. "Mathematically, my chances were less than 50 percent, so I have to say no," he explains calmly. "But I'm glad I made top eight, especially when you understand that my odss weren't in my favour for any given tournament," he adds. Estimations like that may not be normal for every Tom, Dick and Harry, but maybe it is normal for an economy student - Finkel majors in economy at Rutgers University.

Finkel's draft strategy was basically to take whatever he got. Black was his favourite colour, and in the swiss, he went 4-0 with the two black decks - one black and green, and one black and blue. "I just see what comes my way, and take the colours the others aren't taking. One of my strengths is that I am good at adapting, and I choose consistency over power. But black is the best colour," Finkel says.

By now, Jon should be pretty much used to playing in big tournaments, but still, he gets nervous before and during a tourney. "I feel the pressure because I do well. Not really because I feel that people expect a lot of me, but I'm sure that is a factor," he admits.

Worth Wollpert, 24, has for a long time been a less well-known member of the successful Team DeadGuy. But being less well-known doesn't mean that he hasn't done well. The first Pro Tour he qualified for was Pro Tour Columbus, where he ended up as number 38 even though he played (in his words) a "really bad deck."

Now, it seems that Worth has found the old winning formula. In 1999 Pro Tour Los Angeles, he made top eight along with his more well-known teammate Jon Finkel. The DeadGuys did well in Pro Tour LA.

"We're just a bunch of friends that happens to be good players. But we practiced a lot, and we have a lot of good Magic-minds on our team, so we talk about things a lot. Everybody gets into one collective thinking process," Worth smiles.

"Everybody knew that black was the best colour. The problem was how to adapt if you couldn't play black. Rochester draft is about colour negotiations, you have more control over what the guy to your left and right are playing. You can push them out of your colours and end up with a good deck."