adies and gentlemen, this is now official: the format for Pro Tour Prague will be Ravnica-Guildpact-Dissension booster draft. This decision surprised all the players. However, the same thing occurred in constructed already several times in the past, as a way to test players’ reaction, their ability to adapt to a new environment, and eventually ended up in some of the most interesting Pro Tours.
This is how we have had a PT Honolulu early March with Guildpact or a PT LA in late October last year with Ravnica (I’m not mentioning Block Constructed PTs as they have not always been fascinating, remember New York Rebel?).

The main difference, here, comes from the impact of the third expansion. Even though the spoiler list has not yet been made public, it is not hard to imagine that the addition of Dissension will turn the current draft into a brand new format, exactly the same way a single Guildpact booster draft made Ravnica draft a lot more skill intensive. Frank Karsten (the Netherlands) summarizes pretty well the situation: “Dissension will come out like two weeks before the Pro Tour, so that will turn this into a PT: Prerelease. It also seems like one of the hardest and most challenging draft formats ever, with all 10 guilds represented. You can draft pretty much everything! » The “hardest and most challenging format draft ever”, I like that quote! Yes, WotC decided to create the toughest draft format of the history of the PT, the first Limited pre-release PT.
Why did they make this decision?

(*As a side note, if we dig into the Pro Tour history, the first PT Atlanta back in ’96 was actually a pre-release event.)

PART OF THE EVOLUTION

Magic is a great game, essentially because of the rotations. New cards and new formats every three months, in one word evolution, make Magic unlike any other game. For many years, it seemed like the formats didn’t have to be altered as the game itself was constantly evolving.
How were nearly all the previous seasons built?
-Team Rochester Draft PT
-Extended PT
-Booster Draft PT
-Block Constructed PT
-Rochester Draft PT
-Worlds

And what about this season? We have had two Legacy Grand Prix, and, as far as the Pro Tour is concerned, Team Rochester becomes Team Block Constructed, Extended changes to Standard, individual BC disappears too and Rochester turns into Booster. And it might actually be the main rationale: as a good alternative to Rochester draft has not been identified, and as WotC wouldn’t run two limited PTs that would look too identical, they decided to innovate in another way. That’s how they came to the idea of a limited PT in a new format. Do they realize the impact Dissension will have on Ravnica draft, and that it will be nothing close to Saviors joining Kamigawa block?
Well, they’re the experts; I therefore assume they probably already know that better than us. Yes I know, they managed to print Jitte, the card that made every format a little bit inferior for a year, but 99 % of the time they fully know what they’re doing. 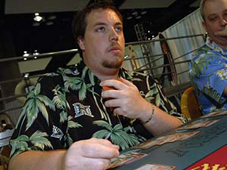 Magic: Online is a great tool, and certainly the best draft test mate in the world, this is hard to deny. MTGO has been very handy to all the people who didn’t have the possibility to draft on a regular basis. As a result, even if the Pros progress as well thanks to it, the average player is the one getting the biggest advantage as he becomes significantly better. The difference between a regular Pro and a good PTQ player has been shrinking drastically. The amateur doesn’t necessarily get better, but as he has the opportunity to practice a lot more, he gets used to the situations, and he learns more easily about his mistakes, whether they are a consequence from play or draft decisions.
Are we coming back to a two-speed practicing?

Despite being a great player, ’05 Pro Player of the Year Kenji Tsumura (Japan) feels a lot more confident in constructed than in limited, as he didn’t post a single Day Two appearance in draft yet. He practices a lot to compensate and performs well in limited in 2006 “I’m playing MTGO everyday -confesses Tsumura, to whom a new expansion is pretty bad news- to me, not being able to practice (with Dissension) is a big disadvantage”. 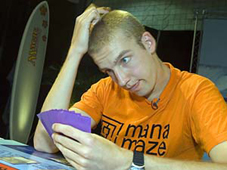 So, the advantage would not only consist in being a Pro, but also in the ability to practice? PT Honolulu quarter finalist Ruud Warmenhoven (The Netherlands): “I can't test because I'll be travelling in Asia up until Prague. A pre-release for everyone would be an advantage for me as long as other players can’t play test neither. But if they can…” “For me it will be an advantage, considers former limited PT champ Jeroen Remie (the Netherlands), since I get to draft with a lot of top pros in a small amount of time, but for any PTQ players it will be a major disadvantage”.

A PT RESERVED TO SPECIALISTS? 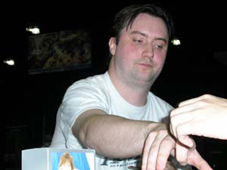 In this context, hard to think about an ‘anonymous’ player winning the PT, as 1) they usually do better in constructed, 2) this PT seems to be promised to a true limited specialist as Anton Jonsson (Sweden) or Richard Hoaen (Canada), two players not enough recognized, as Constructed stars tend to be more notorious and appreciated - but Anton and Rich deserve a big esteem and they might prove it in Prague.
So guys, if you want to perform in Prague, here’s a list of what you need:
-skills in limited
-ability to adapt quickly
-good test mates, you learn faster when discussing the format
-Oh, I almost forgot, in order to practice, you’ll also need booster packs, so GO WIN YOUR PRE-RELEASE!!!

One last little thing, that might interest many of you. If you want to play in the Last Chance Qualifier, the format will be Ravnica Guildpact Sealed deck, as Dissension’s release is on Friday and the LCQ is on Thursday.

Knowing that Dissension releases the Friday of the PT, what’s your opinion about PT Prague being RGD? Just send me an email: magiceurope@hasbro.be

Looking forward to reading your reactions!


This column has been written listening to: Ready Made FC- “Babilonia” and to David Bowie- “The man who sold the world”