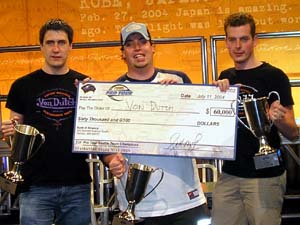 Von Dutch hard to believe, but this weekend in Seattle was Magic's fiftieth Pro Tour! This was also the first time the Pro Tour had returned to Seattle since 1998, back when the Emerald City was a regular host for World Championships. Eight years of history kicked off in New York in the winter of '96 and introduced us to names like Tommi Hovi, Mike Long, Andrew Cuneo and Chris Pikula just to name a few… But wait – all of these players actually showed up in Seattle!

In addition to the staples like Phoenix Foundation and Your Move Games there were some very exciting teams on hand. Last week I correctly predicted that David Williams would be back. He played with Maher and Reeves as team Bottom Set and they finished 13th. AlphaBetaUnlimited (Fuller, Benafel and Boeken) were also back to reclaim their former glory with a new name of ImpulseMagic.com. They started out doing well and advanced to day two, but failed to win a draft match.

Tommi Hovi, the first player to win two Pro Tours, back before anyone had heard of Kai, was playing with Mattias Jorstedt and Raphael Levy. This international team finished just out of the money in 23rd place. 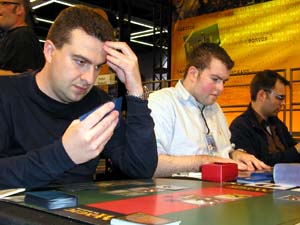 Chris Pikula showed up with another Magic dinosaur Igor Frayman. They joined a more current Magic player Josh Ravitz as team Max Fischer Players. Despite their lack of experience with the new cards this team was in contention for day 3 right up to the last match of the swiss. They placed eighth overall.

Whereas some of the old school players made a comeback and did well in this tournament, it was also a slaughter for some of the better-known teams. After the first two rounds Brockafellers, Your Move Games and Phoenix Foundation were all without a match win. YMG and Phoenix Foundation managed to win their next round of sealed deck only to meet in an elimination match during the fifth round. Phoenix Foundation defeated the Americans in a close match, but their efforts did not pay off, as they lost the next round to Jose Barbero's Ronko Bongo Slim Boy. This is the first time Phoenix Foundation has ever faltered in a team Pro Tour. It also virtually eliminates Kai from the possibility of defending his Player of the Year title. He will literally need to win the World Championship in order to have even a shot at the title.

Sadly another player eliminated from the Player of the Year contention is Mike Turian, who retired from the Pro Tour after making top 8 at PT San Diego. Turian was on hand this time as a magicthegathering.com event coverage writer, his slot on the team with Wise and Cuneo taken by teammate Eugene Harvey.

Illuminati (Gary, Mowshowitz, Shvartsman) made day two but we were eliminated from top 4 contention immediately, losing the first round of the day. We landed in 19th place, earning some cash but this result is abysmal for us because none of us are now qualified for World Championship on pro points. I went on to earn enough rating points (I think) to qualify by playing in side events on Sunday. Zvi Mowshowitz is on the same plan, but his rating was lower and so he has his work cut out for him. Justin is in more trouble and will need to do well in some tournaments over the next week or two in order to avoid skipping Words for the first time in at least five years.

When the dust settled and the top 4 was announced, Pocket Rockets was the big surprise of the weekend. Comprised of little-known Ontario, Canada players Matt Wood, Paul Russel and Joe Derro, this team's lack of Pro Tour experience did not stop them from defeating Bram Snepvanger's team toernooicentrum.nl/faal in the tenth round to lock themselves in for a draw with S.A.I. into the top 4. 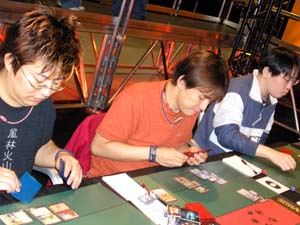 Shop-fireball.comS.A.I. and Shop-Fireball were two Japanese teams to play on Sunday. Despite their success on the Masters circuit, this is the first time Japanese teams got to compete on a Team Pro Tour Sunday. A contrast in teams, Shop-Fireball features some of Japan's best-known players, while S.A.I. has very strong players who nevertheless aren't well known on the international stage. The two teams faced each other and Shop-Fireball persevered, advancing to the finals. There they were defeated by the most experienced team in top 4 and the Sunday favorites - Von Dutch.

Kamiel Cornelissen burst onto the tournament scene a few years ago and immediately gave Kai quite a run for his money in a Player of the Year race. Although Kai emerged victorious, Cornelissen earned his share of top finishes that year and has remained a Pro Tour staple since. He is joined by Jelger Wiegersma, who has a pair of PT top 8 finishes to his name (including one in Kobe this season) and is known as one of the most successful players on the European Grand Prix circuit. This tournament places Wiegersma in the top 5 of the Player of the Year race. Their third is Jerome Remie. While he is not as well-known as his teammates, he is a highly respected pro in his own right who earned more top 16 finishes than he cares to remember.

With their finishes this weekend, both Jelger Wiegersma and Eugene Harvey broke the $100,000 mark in prize money earned. Jin Okamoto's lifetime earnings are now over $85,000 and he is likely to become the first Japanese player to enter the elite 100K+ club.

This weekend also featured several new improvements to the live webcast that magicthegathering.com streams out on the day of the finals. Featuring improved video/audio quality and a new interactive forum where the readers were able to submit questions to Randy and the other commentators, the video coverage from this event saw a good jump in viewership. In case you missed all the action, the following links go to each of the archives.

Like any other Pro Tour, each team develops a strategy or a deck to pursue and holds it very close to the chest until after the event. Well now that the tournament is over, I can share Illuminati's draft strategy for those interested in playing this format.

Our first breakthrough came with the realization that we should put a black mage on the left. This is a departure from the traditional way of thinking that a black mage should be on the right because black is very solid in Darksteel. Our reasoning is that we can afford to put a black mage on the left precisely because of how black is in Darksteel. While black is deep, no one card truly stands out. You have many excellent commons such as Essence Drain, Grimclaw Bats, Chittering Rats, Dross Golem and Echoing Decay. While Rats and Essence Drain are slightly better than the rest, it is virtually impossible for the opposing team to cut the good black, ensuring that the player in C will be flush with good picks throughout Darksteel. You also have the best chance at bombs in Mirrodin and Fifth Dawn. In Fifth Dawn the card this deck particularly wants is Blind Creeper. You attempt to build something akin to suicide black with fast creatures and splash either red or blue based on how the packs get opened.

The middle seat is for the green mage. You draft all the best green cards. Based on the packs you will then either build a solid red-green deck (which beats Blue-White in this format if built correctly, though many players seem to think otherwise), or play Sunburst in this seat utilizing the green mana-base to cast all sorts of nasty spells.

Finally, the player on the right is a Blue-White mage. Being in that seat gives him a chance at the very best common in this format – Leonin Bola. It is shocking how much players underestimate the power of this card. It is often seen going as late as fourth or fifth pick in drafts. Zvi Mowshowitz recently caused a controversy picking it over a Fireball, but this decision is often correct. With Trinket Mage and Leonin Squire, Bola is easy to find and hard to kill – and while it is in play, it can be simply ridiculous, especially in a blue white deck.

Since this deck is already valuing Squire and Trinket Mage very highly, its drafter will also keep a close eye on one-casting-cost artifacts – Baubles, Spellbombs, Chromatic Spheres all combo with these creatures, becoming more powerful still.

There was an important draft strategy that we missed out on in testing, but discovered during the Pro Tour itself. In the third draft I was picking up my black cards but failed to establish a second color. In Darksteel I ended up with a pair of Darksteel Ingots. By the time Fifth Dawn rolled around I had no non-black color commitments and a perfect base to draft Sunburst. I did so, and the results were amazing. It fit the deck perfectly and was easy enough to pull off without sacrificing any draft picks. I drafted mono-black Sunburst for the remaining three rounds and didn't lose a match (perhaps not even lost a game) in those rounds. If only we had discovered this strategy earlier on!

Brian David-Marshall found out the Pro Tour schedule for the next year and shared it in his event coverage last weekend. For those who missed it, here is the schedule:

North East players will be happy with an abundance of events they can drive to. While the current season visited the West Coast a disproportionate amount of times, the pendulum swings the opposite way this time. The European Pro Tour will take place in London, and we will make not one but two trips to Japan this year – for Rochester Draft and World Championships.