White card that produces four 1/1 token creatures is nothing new. As far back as the very first Pro Tour, then-Canadian National Champion Eric Tam made the Top 8 of that inaugural event with a four-color Green deck utilizing, among countless other strange and mismatched cards, Icatian Town as a finisher.


You probably notice that Eric's deck looks to be a mess... Part of that is because deck design wasn't at that point what it is now, and partly because the tournament format of the first Pro Tour was a modified "Home-dicapped" Standard where each player had to run five cards from each of the then-legal Type II sets. Icatian Town was probably included solely due to its representation of Fallen Empires… but that doesn't explain why Eric played it main deck as well as sideboard other than he wanted to. Nevertheless, Tam seemed to have something going on with his unique selection of Icatian Town; I know I tried to build countless decks utilizing that expensive sorcery, just to see if I could get it to work.

Several years later, Tomi Walamies ran an impressive 6-0 during the Block Constructed portion of Worlds 2002 with a deck that defied the field. Even though most players thought of Odyssey Block as a U/G or B format, at least until the appearance of three- and four-color Wake decks late in the PTQ season, Walamies cruised to a perfect record on the strength of Battle Screech.

So why drag out old deck lists with obsolete white creature producers? Icatian Town and Battle Screech aren't exactly Kjeldoran Outpost and Decree of Justice, after all... They aren't even “Processor for one.” Yet these cards were played in highly successful decks for their eras.

The Savior of Kamigawa 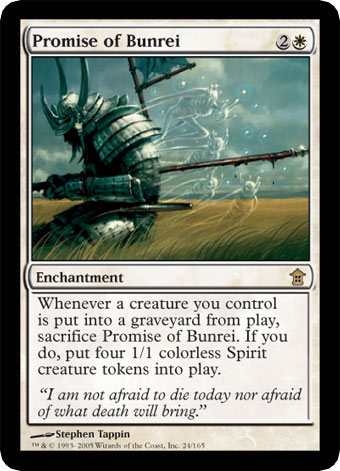 As far as token creature generators, Promise of Bunrei produces at a significantly cheaper cost than both Icatian Town and Battle Screech. However, the card comes with a catch. Unlike its predecessors, Promise of Bunrei does not produce creatures immediately. It is an enchantment that has to be triggered by the death of a creature in order to put its tokens into play. Promise of Bunrei's trigger condition slows the card down but can also be very helpful. Traditionally, the worst cards for White Weenie are global sweep effects like Pyroclasm and Wrath of God. Because especially mono-White Weenie decks need to win via creature damage, big creature defense can put a real bend in the aggro plan. But if you think about it, getting your creatures killed is the perfect setup... That Wrath of God might take out your Lantern Kamis, but Promise of Bunrei will ensure that you have a small army of follow up threats in what otherwise might have been your worst case scenario.

Now the possibility exists that you either might not be able to count on your opponent to kill your creatures to set up Promise of Bunrei, or you want to use it proactively. If either of these is the case, you will want to play some cards in your deck that let you trigger the enchantment yourself. In a Standared White Weenie deck, you might be playing Kami of Ancient Law. Kami of Ancient Law is a solid 2/2 two drop with a highly relevant special ability. While you wouldn't necessarily run Kami of Ancient Law for the express purpose of activating your Promise of Bunrei, you can actually sacrifice the Kami, targeting the Promise of Bunrei itself, to get the token creatures. Because the Kami of Ancient Law is sacrificed, it goes to the graveyard immediately (before its ability finishes resolving), Promise of Bunrei will trigger against the Kami's sacrifice and sacrifice itself while Kami of Ancient Law's enchantment hating ability is still on the stack. Similarly, Kami of False Hope is a great way to hold back a Rude Awakening, and sacrificing it will set you up for a counter-strike. The Fox Offering on Patron of the Kitsune may prove even more effective; even if the opponent put you on being able to produce more than a blocking Samurai of the Pale Curtain during combat, it is unlikely he was looking to run his squad into the 5/6 Legendary Spirit as you prepare for the life-rich five man return volley.

For a deck templated from Eric Tam's, Promise of Bunrei in a multicolor Green deck has many natural synergies. The most obvious is Sakura-Tribe Elder, the most effective card from the recent Pro Tour and probably the overall strongest card in Champions of Kamigawa. The almighty Hana Kami can serve the same purpose, and Rootrunner has seen play in both Standard and Kamigawa Block Constructed.

One very important difference between Promise of Bunrei and Icatian Town, or even any regular creature, is that you can't topdeck it and hope to recover immediately. If the opponent taps out for a Wrath of God and you have, say, a Kitsune Blademaster, you drop it and ask if he has something that can stop a potential 3/3 first striker; not so with Promise of Bunrei. Unless one of you sets this card up, it is going to sit uselessly on the table, nowhere near the Red Zone, until your opponent is the one calling the shots as to what's relevant, determining that field of battle.

The Spirit tokens are also colorless. Among other things, their colorless nature gives you additional options. Say you are having problems busting through a Circle of Protection: White, but know that any more cards you commit to the board are just going to be destroyed... That's where Promise of Bunrei comes in. Not only does this enchantment back you up against Wrath of God like we said in the beginning, but it runs around Circles of Protection, too!

Back during Champs, White Weenie players imported Raise the Alarm from Mirrodin Block for their Isamaru, Hound of Konda-driven Standard decks. For only one more mana, Promise of Bunrei produces twice the tokens; in certain types of White Weeie, it is an automatic inclusion, or at least substitution for existing cards… The only caveat is that players run Glorious Anthem. Over the past several months, there has been a bit of a debate in the White Weenie community. Many especially progressive deck designers have tried to play equipment decks with Bonesplitter, Sword of Fire and Ice, and Umezawa's Jitte, ususally on the back of a Steelshaper's Gift engine. A Glorious Anthem deck is about as viable, but able to deal more damage in the short term. Because of the structure of Promise of Bunrei, Glorious Anthem will tend to provide more damage (three mana, eight power). This new card shores up one of White Weenie's vulnerable spots, gives the deck some much desired card advantage, and makes it harder for control decks to contain the beatdown.

Ironically, I don't see Promise of Bunrei being a very good main deck White Weenie card in Kamigawa Block. Most of the control decks use Final Judgment as an answer to Kokusho, the Evening Star, Myojin of Cleansing Fire, and related Legendary creatures; facing Final Judgment means that White Weenie will have to use the Kami of Ancient Law trick we talked about earlier and will be unable to piggyback creature elimination for the purpose of activating Promise of Bunrei. Moreover, the Promise ultimately just sets up creature damage; this is useless if the opponent establishes Ethereal Haze lock, at least given the cards we know about to date. Whether it comes in as a sideboard card against non-White control decks remains to be seen.

If nothing else, Promise of Bunrei can be considered a threat with a high power-to-mana ratio. It costs three mana, but makes four power. Against a deck without blockers, it is like a Hidden Horror that doesn't ask you to discard, in one sense better than most early plays of Beacon of Creation (and we know how good that card has become). Mastering this card requires you to carefully choose the creatures complimenting it in your list, or to have a keen awareness of the kinds of attack sanction that you are likely to see at the next tournament. When applied correctly, especially with Glorious Anthem in the mix, this enchantment promises to be a powerful threat.