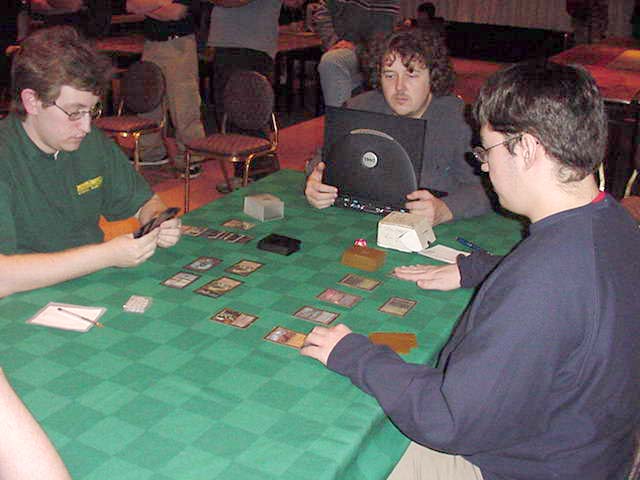 This Grand Prix qualified Josh Smith for his first PT. In the quarterfinals, he faced off against Pro Tour regular Alex Shvartsman.

Game 1, the power of Miracle Gro

In game 1, Alex came out very fast, casting 5 spells by turn 3. By the time the dust settled, Josh was staring down 2 Gaea's Skyfolk, one of which had Curiosity on it. Josh stabilized a few turns later with Pernicious Deed, but Curiosity had done its job, refilling Alex's hand for the next assault. This assault came in the form of a Werebear that rapidly brought down Josh's life total. Josh made a last ditch effort to save himself, casting Shadowmage Infiltrator with 3 mana untapped. Alex made a nice play of Dazing the Infiltrator. This forced Josh to tap 1 mana, so that he could no longer block with his Faerie Conclave. Then Alex cast Withdraw on the Infiltrator and the Werebear, paying to prevent the Werebear from being returned. Game 1 to Alex Shvartsman. 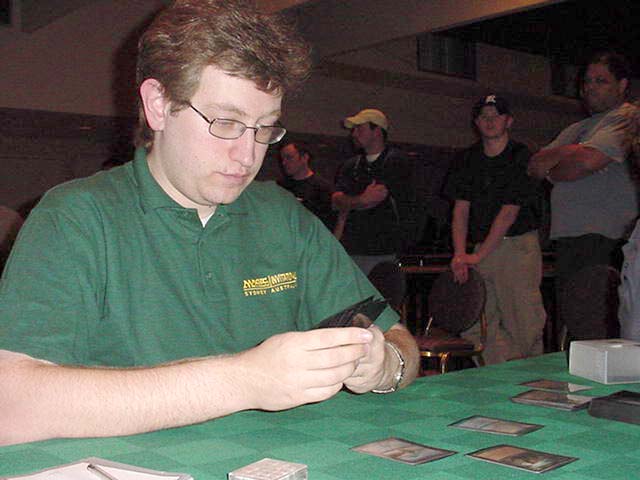 When most people look at Miracle Gro, the first thing they ask, is how can the deck run only 10 lands and 4 Land Grants? The question of how much mana to put into a deck has been a common one throughout Magic's history, as the objective is to minimize the total number of losses to not enough land AND the number of losses to too much land. The lower the land total in the deck, the harder it is balance this issue.

In this game, Alex took a double mulligan. Josh then swept away Alex's first few threats, and Alex was suddenly presented with the reverse problem. His draws had now given him too much mana, a he quickly lost the game to Morphling with 6 mana on the board and nothing to do with it. Game 2 to Josh Smith 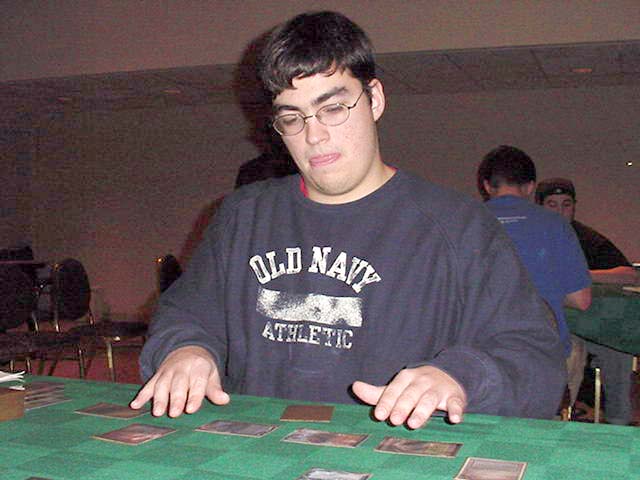 In playtesting Miracle Gro, one combination of spells was always frustrating: Pernicious Deed/ Powder Keg and Counters. Throw in Shadowmage Infiltrator to help draw these and you have a tough, but fair match up. Josh has gone one better, he has BOTH Pernicious Deed and Powder Keg.

The game starts out good for Alex, but an early Powder Keg forces him to go slowly, and keep only minimum threats on the table. Josh wisely chose to deal with the creatures Alex played with cards from his hand, effectively stranding 2 Winter Orbs in Alex's Hand. The game slowly continued, with Alex making little headway. Josh, however, had problems finding cards to win the match, just drawing land and defensive spells. Eventually, however, mass quantities of global removal had held off Alex for long enough, and a Morphling made an appearance on Josh's side of the board. The rest is history. Game 3 and match to Josh Smith