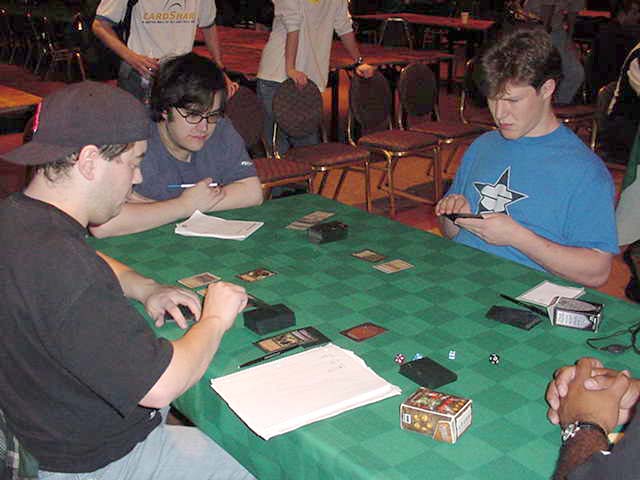 Representing the new evil dominant force of Extended was Ben Rubin, using the new three color version of Miracle-Gro, also known as Super-Gro. Representing the rest of the field was Jonathan Pechon, known on IRC as Sigmund. He was using a Junk deck. In Game 1, Ben Rubin won the roll but was forced to mulligan. He had promised that he was "gonna show you glorious" but then decided that "as long as we're being glorious" he'd better go friend a decent hand. It looked fine, but two Wastelands later things were more problematic. He could do nothing but sit and watch while River Boa and then Call of the Herd were played. Finally drawing a second land, he put down a Meddling Mage on Call of the Herd since there were two in Pechon's graveyard, the second one having been countered by Force of Will.

Needing to block, he put down a second Meddling Mage, also on Call of the Herd. Alas, when he went to double block one of the Mages was Plowed, leaving the other to die in vain. A Gerrard's Verdict cut down on Rubin's hand size, his Werebear was also Plowed and finally another Verdict finished off Rubin's hand. An array of green creatures went in for the kill. 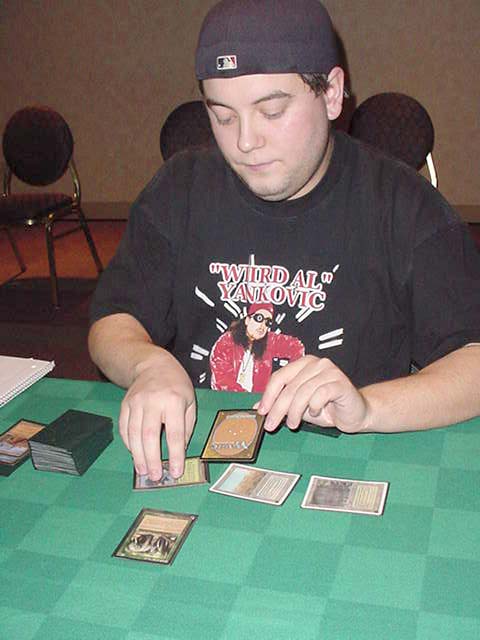 Game 2 started out with another Wasteland and even an attempt to make Rubin think Pechon had a second one. Instead, the game got underway with land for all and Rubin played first a Merfolk Looter followed by a Winter Orb which was of course immediately responded to with a Treetop Village that both players agreed was "not optimal." With the Orb slowing the game to a crawl the Looter had time together with multiple Gushes to allow Rubin to assemble his ideal hand and to put extra cards into it. Finally, he made his move, putting down Meddling Mage on Swords to Plowshares despite that meaning that he had to discard two of his own as useless, then he put down a Mystic Enforcer. Pechon had nothing worthwhile to do in response without being able to cast Swords to Plowshares, and he died to the Enforcer and Mage.

During the shuffling for Game 3, Pechon voiced some serious complaints about his cards. His three other Duresses had been found off in a clump and would "have to attend the company board meeting." After going on to threaten the existence of the corporate Ping-Pong table, Ben decided to use this opportunity to resideboard. It turned out he did an amazing job of it, guessing right in both games: In Game 2 he had no targets for the Slays that got brought in against him, and in Game 3 he had no targets for Seal of Cleansing. 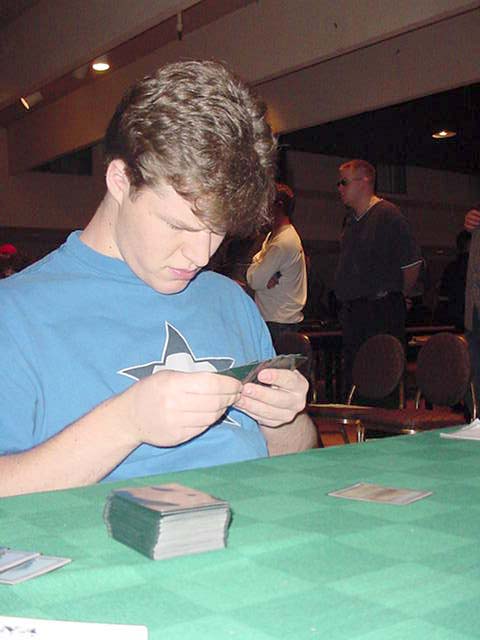 In Game 3, both players faced the decision of whether to mulligan their one land hands. Pechon kept his due to it being able to cast Duress and two Swords to Plowshares after he sacrificed his Grassland, but Rubin decided to throw his back. Rubin was rewarded with a hand with both land and spells in it, while Pechon failed to draw additional mana other than a Wasteland on turn three. Rubin didn't have a green mana source other than a Land Grant he couldn't find a way to cast as revealed by the Duress. He chose to take the Gush instead, allowing Rubin to keep access to green mana, and when Rubin topdecked a Brainstorm he got to put back his useless basic Island and finally cast his turn four Land Grant. A Quirion Dryad came down, and Rubin used Gush and Foil to stop the first attempt to Sword it and a Force of Will to stop the second try, meanwhile growing the Quirion Dryad that gives the deck its name up to 4/4 and the next turn 5/5 as a Mystic Enforcer joined it. Without any mana or good answers left, Pechon could only throw a Spectral Lynx to the Swords and then watch as the creatures finished him off.