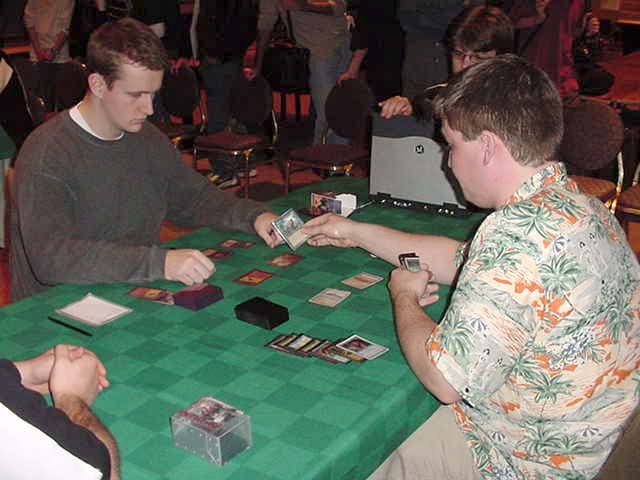 This Top 8 has many recognizable faces, and this match shows just how many Pros did well at this tournament. Neither of these players needs an introduction, but, in case you didn't know, Bob Maher is both a Pro Tour and Grand Prix Champion, and Brian Kibler is possibly one of the most well-liked Internet columnists in the world, in addition to having a Pro Tour Top 8 of his own. Maher is playing Sligh, while Kibler is playing Super-Gro. Kibler commented that before the Grand Prix, Bob and he had tested around 15 games, and Kibler had won all but 2, but during the swiss Bob swept Kibler. Kibler was out for revenge.

It may seem odd that Maher is running Sligh. He came to this tournament with Oath in tow, but decided at the last minute to abandon it. He tried to get a Donate deck off William Jensen, but failed. That left him scrounging for a last-minute option. Lately, he's been teaching his father competitive play, and as a result has been playing a lot of Sligh. He decided to stick with what he knew, and thus accidentally ended up with a deck tailor-made to wreck a field of Gro decks.

Maher won the die roll, and elected to play first, beginning the game with a Jackal Pup, followed by a Volcanic Hammer to Kibler's dome. Kibler played a Turn 2 Quirion Dryad, but Bob had a Firebolt for it, in addition to a Mogg Fanatic. Kibler played another Dryad on his third turn, and then returned 2 lands to his hand to cast a Gush. Maher responded by sacrificing his Mogg Fanatic to kill the Dryad, and played a fresh Mogg Fanatic on his next turn, all the while attacking with his Jackal Pup. 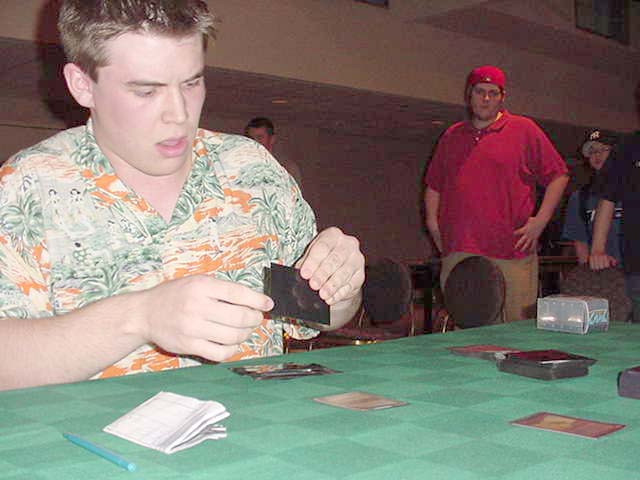 The Pup wasn't long for this world, however, as Kibler dropped a Werebear with threshold in addition to a Winter Orb, and Bob ran his Pup into it in order to do an extra point of damage with his Mogg Fanatic; Bob didn't want that Werebear sticking around for long, though, so he cast a second Firebolt on it. Kibler was forced to Plow the Mogg Fanatic on the following turn, but Maher had yet another one. Kibler played a Werebear on his turn, but that didn't stop the brave Mogg Fanatic from attacking. Kibler blocked, and Maher Firebolted, but Kibler Force of Willed. Bob definitely didn't want that Werebear to stick around, so he sacrificed his Barbarian Ring to kill it off.

The game slowed down quite a bit from that point, with Maher Seal of Firing a Merfolk Looter, and Kibler Dazing Bob's attempt at a Ball Lightning. Kibler tapped out for a Mystic Enforcer, and Bob saw this as his chance to cast a Ball Lightning, but Kibler had a Foil for it, and the game ended shortly thereafter. 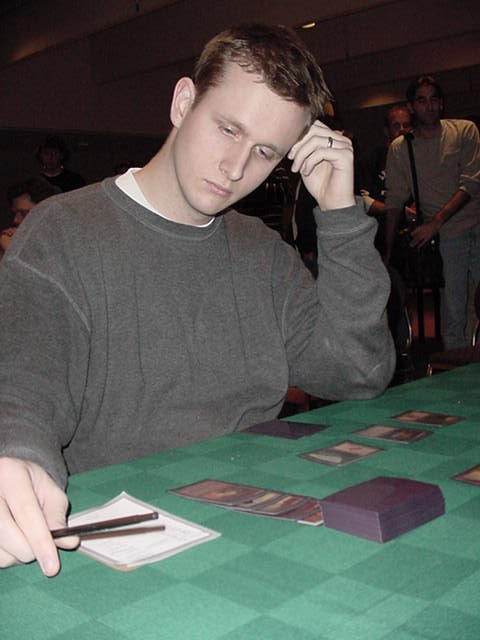 Kibler brought in 3 Meddling Mages and a Plow for Merfolk Looters, while Bob brought in Pyrokinesis, Price of Progress, and Pyroblast for Cursed Scrolls and Ball Lightnings.

Maher played first in the second game, and led with a pair of Fanatics, one of which got Plowed on his 3rd turn. Bob also Wastelanded Kibler, but he responded with a Gush, thus saving his Tropical Island, and then Bob Volcanic Hammered him. Kibler had another Plow for the second Fanatic, though, and also successfully cast a Meddling Mage naming Pyroblast, but it was promptly Firebolted. But this didn't bother Kibler in the least, as he cast Werebears on consecutive turns while also Dazing Maher's Flashbacked Firebolt. Maher made one last attempt at winning the game by Price of Progressing for 4 and Fireblasting in response to a Meddling Mage, but Kibler had a Force of Will for the Fireblast, and Maher didn't draw anything useful on his turn, and scooped.