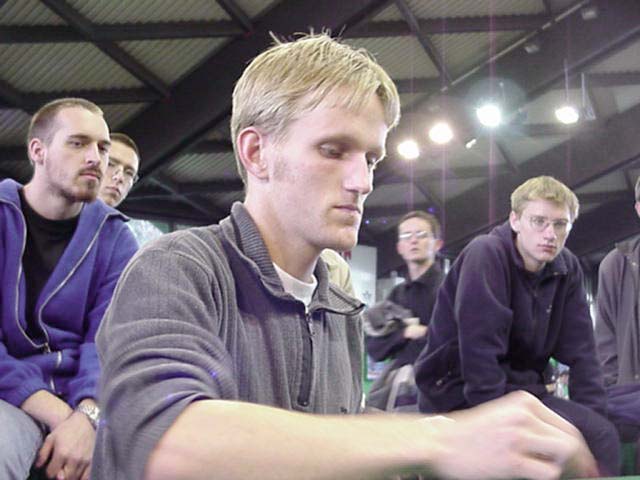 Oberbek got a fast start in this first game, with a second turn Nightscape Familair accelerating him into a third turn Fact or Fiction. Mattias didn't seem best pleased to see a Void, and put that into a pile, with two lands and two Fire/Ice in the other pile. Oberbek took the Void and attacked with his Familiar, Kettil not blocking with his Lynx.

The Void got rid of a Vindicate and a Dromar's Charm from Kettil's hand, but left him with a Fact or Fiction. However, Oberbek's mana acceleration from a pair of Nightscape Familiars proved to be a crucial factor at this point. He cast his own Fact or Fiction in response to Kettil's, and revealed two Gainsays, Island, Urza's Rage, and Prophetic Bolt. This gave Oberbek two Gainsays, and he countered the Fact or Fiction.

Kettil attempted to stem the tide with a Spectral Lynx, but it was Terminated, and the Familiars attacked again to put Kettil on 13. Mattias was trying to get enough mana to cast the Desolation Angel in his hand, but Oberbek Voided it away with the Swede still on six mana.

Kettil pulled a Rout from the top to finally get rid of the Nightscape Familiars, and they went into topdecking mode. Both players drew well from the top, with Oberbek countering a Yawgmoth's Agenda, and a Gerrard's Verdict. Finally, however, the Swede's draws proved too much for Przemek, as he was unable to counter a Desolation Angel. 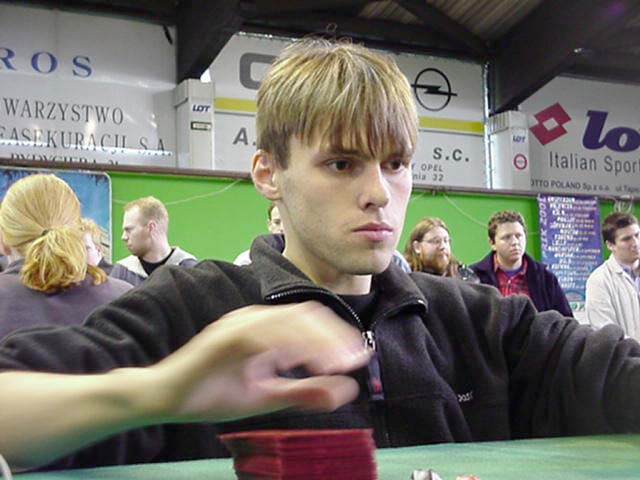 Mattias mulliganned in game two, and neither player cast a spell until turn four, when Kettil Dromar's Charmed a Fact or Fiction. Przemek then cast another Fact or Fiction in his main phase, netting him two lands and a Nightscape Familiar, and used the mana acceleration from the Familiars once again to Lobotomize Mattias for his Desolation Angels.

Mattias cast Phyrexian Arena, a good card in this match-up, but he was prevented from using it by a lack of lands. He didn't have enough mana to force through a Vindicate, and it was Undermined. The Poles Nightscape Familiar reduced Kettil to ten, all the time countering Mattias's attempts to Lobotomize him. An attempt to cast Rout turned out painfully for Kettil, since Przemek used Prophetic Bolt and then Undermine to knock him down to two.

Two Dromar's Charms meant that Kettil survived Oberbek's attempts to Prophetic Bolt him out, but he was still only on five life against a Pyre Zombie and a Nightscape Familiar. This low level of life caused him to cast Gerrard's Verdict on himself to go back up to eleven.

He was immediately knocked back down to eight as a Nightscape Familiar got through and Oberbek's Pyre Zombie was sacrificed after it was blocked by Spectral Lynx.

Kettil drew nothing useful for too many turns, and he was down to three by the time Yawgmoth's Agenda resolved, and there were only about thirteen cards in his deck. Facing a recurring Pyre Zombie meant that Mattias had to cast life-gaining spells each turn such as Dromar's Charm.

He Recoiled his own Phyrexian Arena while at five life to buy himself more time, then cast Gerrard's Verdict to go up to eleven, and then Dromar's Charm for five more life, but still Mattias had to find some way to win the game as he would be decked fairly soon. Realising that he had no way to get eighteen damage past the Pyre Zombie without his Desolation Angels, Mattias conceded and they moved onto game three.

Kettil's next attack brought the Pole down to five as he cast Fact or Fiction in Mattias's attack step to find some answers to the Lynx. Mattias only had lands and a Yawgmoth's Agenda in his hand, but he topdecked a Vindicate, which removed the Dodecapod, and allowed the Lynxes to sneak through again and put Oberbek on only one life.

Przemek played an Emblazoned Golem, and Recoiled one of the attacking Lynxes, to survive for one futher turn. Unfortunately for him he didn' t have any way of stopping Mattias from replaying it straight away and attacking for the win on his next turn.