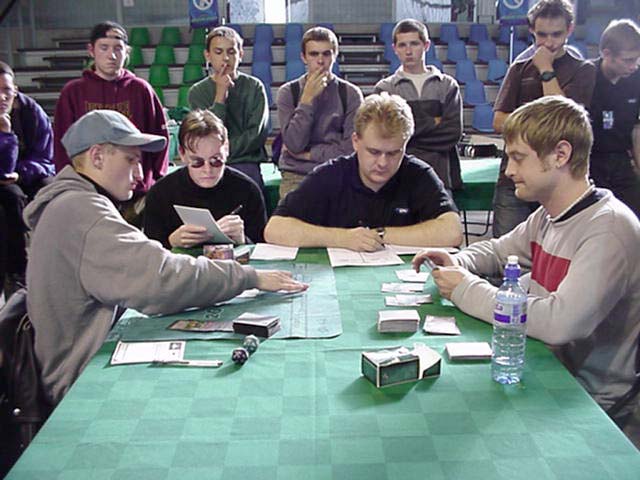 Rickard Österberg is one of a trio of Swedes in the top 8 that is hoping to walk off with the title. He is playing a No-mar variant with lots of discard and Desolation Angels as the finisher. He didn't appear too confident before the match as his opponent, Marcin Sados, is playing the fast G/R beatdown deck. To make things worse one of Österberg's key sideboard cards, Ravenous Rats, becomes very dangerous as Sados is running Dodecapods in his board.

Österberg won the important dice roll but then had to mulligan his opening hand. Sados didn't get a good start either, failing to make a creature on turn 2 in a deck full of them. Österberg took advantage by vindicating a mountain and then did the same to the second one Sados laid to leave the Pole with no red mana sources. Sados was still able to make monsters, but all the while Österberg was simultaneously attacking Sados's hand and digging deeper into his own deck with Probe. Rout cleared the board and when Österberg summoned Spectral Lynx and made an Agenda Sados was in deep trouble. A Fact or Fiction turned over a Desolation Angel, which Österberg took but never needed cast as Sados conceded when Probe emptied his hand.

Sados had a much better start, dropping a Mongoose on turn 2 and forcing Österberg into a "moment of truth" when he summoned Ravenous Rats. Sados didn't have a Dodecapod and the Rats efficiently went 2-for-1 as Sados was forced to clear them out of the Mongoose's path with a Ghitu Fire. Österberg simply made a much better blocker - Spectral Lynx. Sados's attack was stalled and every time he tried to build up an army Österberg swept the board with Rout before the situation got too dangerous. The game went into a cycle of Österberg Routing and both players following up with creatures. Österberg couldn't find an Angel or Agenda to close the game out and when Sados drew Keldon Necropolis he looked in danger. A third rout got rid of 6 damage worth of creatures and then a race started as Österberg began to beat down with a 4/5 Emblazoned Golem. Sados reached the magic number of 12 lands and went with the big Rage to the dome. Österberg nullified the damage with a pair of Dromar's Charm and looked favourite to win the race. One turn from losing Sados needed to topdeck badly. His deck answered and gave him Urza's Rage!!!

Afterwards Österberg said he'd thought about Vindicating the Necropolis but wanted to hold it back to clear a path for the Golem next turn if needed.

Sados returned to his sideboard and switched out a Yavimaya Barbarian to bring back in the 4th Titan.

Österberg went first, considered playing a Rat on turn 2 and then decided not to. Sados forced him to play it when he made a Mongoose on his turn. Again Sados didn't have Dodecapod and again the Rat efficiently went 2-for-1 as Sados used Rage to clear a path for the Mongoose. A Raging Kavu was slain and with no other targets Österberg Vindicated Sados's 4th land to prevent Skizzik or other brokenness occurring next turn. This proved important as Sados made 2 Titan over the next 2 turns and both couldn't be kicked. A Rout cleared away the Mongoose and the first one and when Österberg followed that with a 4/5 Emblazoned Golem he managed again to successfully blunt Sados's assault. Sados ran an unkicked Titan at Österberg in an attempt to try and remove it with Flametongue Kavu but Österberg didn't bite. The Swede reached 7 mana and considered going for the Angel, but Sados had all of his mana open. Instead he summoned a Lynx and then countered Sados's attempt to bury the cat in Scorching Lava. In his next turn Sados used Flametongue Kavu on the Lynx to force through 3 damage from a Dodecapod. This tapped out most of his mana though and when the Dark Angel sings, the game is over!

Rickard Österberg beat Marcin Sados, 2 - 1 and advances to the semi-final.