ach of the five Gods in Theros wields a weapon.

For Heliod, his mighty sun spear. For Thassa, her alluring bident. For Purphoros, his mountain-carving hammer. For Nylea, her steady bow. 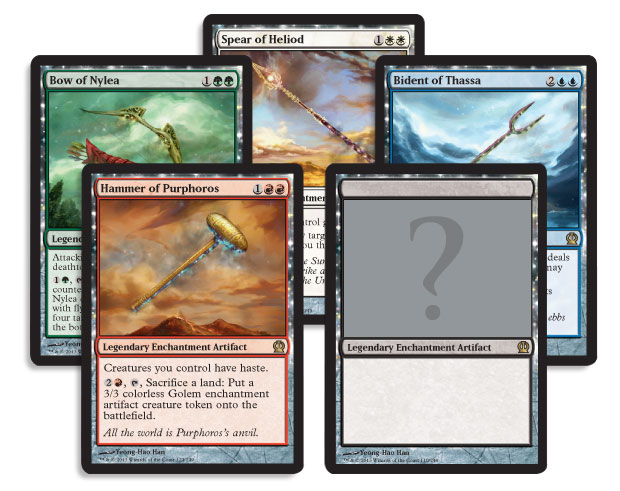 But what of Erebos, God of the Dead? What kind of weapon does the chief of the Underworld choose to carry at his side?

It would need to be something versatile. Something to grab those he has sent below—or those above—and then cast them away once they've exerted their usefulness. Something he could use to command those he snares, using them to inflict pain and sap life back into himself.

If you've been following the Planeswalker's Guide to Theros , you might know that Erebos's weapon is Mastix, a long whip of many uses. But you don't know yet what this means for its cardboard incarnation.

Well, prepare to find out. Let's just hope you're the wielder, not the one stuck in the whip's maw...

I've talked about the card as a package, and about what it can do in general terms, but let's look at some actual applications. Onward!

Another element of the Whip that I haven't touched on is its mana cost. With two black mana symbols sitting there, it's in a prime spot to help out your devotion count. (The devotion you need to turn on... Erebos... perhaps?)

Theros has a lot of cards perfect for a mono-black devotion deck. There are certainly a lot of ways you can take that concept, and it can fall anywhere from a hyper-aggressive deck to something that resembles more of a Mono-Black Control strategy.

Let's take a look at something that falls somewhere more in the middle: not quite midrange, but not completely aggressive either.

Gavin Verhey's Erebos and his Minions

3 Erebos, God of the Dead 3 Whip of Erebos

This deck takes advantage of black devotion, using several cards that help move it upwards—plus some rather notable cards at the top end. Erebos is a powerhouse, drawing you a fistful of cards against any opponent who doesn't pressure enough—and with 5 power, he hits hard.

But perhaps the card that might impress you the most is Gray Merchant of Asphodel. The Merchant—or, the design name I'll always know him by, "Coinkeeper"—may seem a little expensive at five mana. But if your devotion is at a reasonable amount, he can be responsible for some huge swings. With just two other black mana symbols on the battlefield—a simple Lifebane Zombie, perhaps—he drains for 4! He's especially crazy when you draw multiples.

...and what better way to set up your devotion and "draw" multiples than the Whip? By whipping him out from the graveyard, to drain once more! Curving Whip into Merchant is good for at least 8 points of drain right there. (Assuming your opponent can't remove your Whip, that is.)

To help build up your devotion and put some pressure on early, you have some early creatures to start up the engine. Rakdos Shred-Freak is given new life due to devotion. Pack Rat's tokens also have the

mana cost on them—and if you've ever played against Pack Rat in Limited, you know that it can take over games by itself!

Once those have softened up your opponent, it's time for cards like Erebos and Gray Merchant to seal the deal. The Whip's lifegain gives you an edge in aggressive mirrors, while also bringing your dead friends back a second time.

There are a lot of directions you can take with this deck—and there are also a few more exciting cards for mono-black that haven't been shown off yet. This will certainly be one to revisit once the entire Card Image Gallery is up and available.

Perhaps you're not so into devotion and are looking for another avenue to stroll down. Fortunately, there are plenty of other options for you.

Two-color combinations that fit right into the play style the Whip tries to play toward are white-black and black-green. And since I'm going to feature the black-green take of the deck a little later on, let's take a look at the white-black approach.

Although Innistrad is rotating, there is still a key Human tribal piece from Magic 2014 you can look at: Xathrid Necromancer. A number of the cards that fit in this deck are Humans, making the Necromancer a nice choice.

While there aren't as many heavy hitters in this deck to work with Whip, there are still a few good targets. Sin Collector can strip away your opponent's hand with ease—especially with repeated activations. But the real big one is Ghost Council.

Usually, you have to be careful not to let your Obzedat die. But with Whip out, the ghostly masterminds can repeatedly escape death. How appropriate!

It's a bit tricky ruleswise, but the gist of it is this: if you Whip back Obzedat, you can exile it at the end of turn to its own effect. If you do that, it's still getting exiled so the Whip is happy. Then, it will come back later on ready and raring to go. Fighting off an Obzedat was hard enough—now try fighting off an Obzedat that truly can't die!

While there is certainly a Golgari midrange deck with Scavenging Oozes, Polukranos, World Eater, Golgari Charm, and so on (or perhaps black-green-white with Loxodon Smiter) and Voice of Resurgence, I already covered two more-midrangey decks, so I wanted to take a look at something a little different: a combo focused Whip deck!

There's a ton of self-milling still available in Standard between Grisly Salvage and the newcomer Commune with the Gods (plus Drown in Filth if you want it). Not only can you fill your graveyard quickly, but you can also find the pieces you're looking for to assemble Whip of Erebos and friends.

Take a look at one potential future of reanimation:

With a ton of acceleration, this deck can power out its threats quickly. But it can also kick up a Whip chain pretty fast. Abhorrent Overlord is certainly one of the choice cards to reanimate, leaving an army of 1/1 blockers behind. 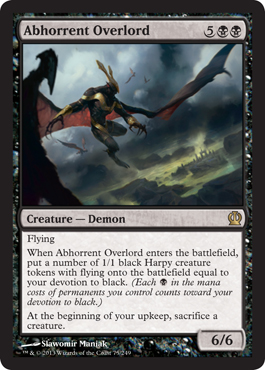 Even if you get off to a slow start, Whip of Erebos still ensures you're not that far behind due to all the life you're gaining! Your big creatures hit for a ton of damage, and Erebos's lovely Whip keeps your life total in great shape.

You might notice those Prime Speaker Zeganas and think they're a bit out of place. While getting

is pretty difficult, Zegana makes for a fantastic Whip target. Alongside a big Nighthowler or even a sizable Lotleth Troll, you're poised to draw a grip full of cards to reload. You don't want too many, lest you draw a bunch of them, but with just two you won't draw her very often. (And if you do, you can always pitch her to Lotleth troll... or just cast her!)

Scavenging Ooze is certainly a problem for the reanimation-focused side of Whip—although, fortunately, this deck has a reasonable plan B of just casting its creatures! Reaching seven mana is fairly trivial with eleven mana-producing creatures in your deck. You can quite often just slam down an Overlord and start attacking in!

We don't often make repeated reanimation effects—and for good reason. Whip of Erebos is a card that has potential all over the place: in aggressive decks (especially out of the sideboard), in midrange decks, in combo decks, and maybe even in control decks as a way to reuse powerful enters-the-battlefield triggers. Ah, the possibilities...

Theros has my deck-building heart in a flutter. I love this part of the year, when a huge rotation is about to happen and change everything; when the calm before the storm is gone and you can finally see the landscape-changing future on the horizon. Let's see what you can come up with in this fresh new Standard format!

Format: Post-Theros Standard
Restrictions: None!
Deadline: Wednesday, September 18, at 6 p.m. Pacific Time
Submit all decklists by clicking on "respond via email" below. Please submit decklists using the following template. (The specific numbers below are arbitrary, so please don't feel a need to use them—it's just how an example of how a decklist should look when laid out.)

What does the future hold? I can't wait to find out—amaze me! Note that I extended the deadline until September 18, so you should have plenty of time to look over the entire card list and build decks after it goes live next week.

If you have any other thoughts or comments, feel free to post in the forums or send me a tweet! I'd love to know what you think of Whip of Erebos, or anything else you've been wondering about.

Next week, I'll be back with a look at our first reader-submitted deck of the new format: a devotion deck! I look forward to seeing you all then.