The Fault in Our Stars

Journey into Nyx previews are here! I've been waiting to talk about this set for ages, and now I can finally spill (some of) the beans about what's going on. For example, I can emphatically tell you this set is not about the rock band, Journey. (Although I would recommend that, with five new gods in the set, you definitely don't stop believing.) 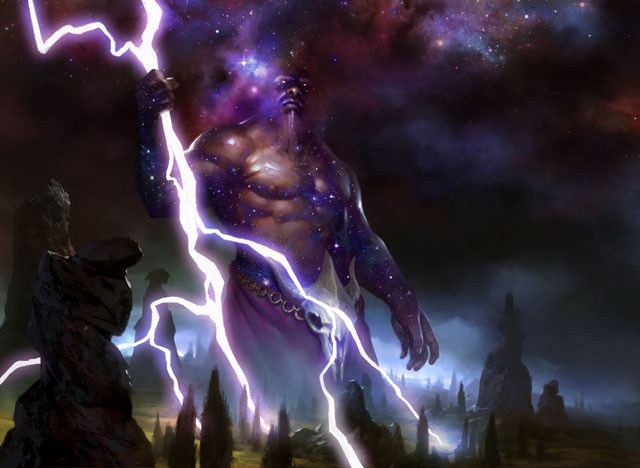 I can also tell you that it's finally time to do something us deck builders have wanted to do since Theros first came out all those months ago: build a heavy-enchantment deck! By using some seed cards, like Ethereal Armor, we've all tried to make it work before to debatable levels of success, but Journey into Nyx really makes it possible with the new constellation mechanic.

As you may have guessed, my preview card for this week showcases this new mechanic in all its glory. Let's take a look at Underworld Coinsmith. 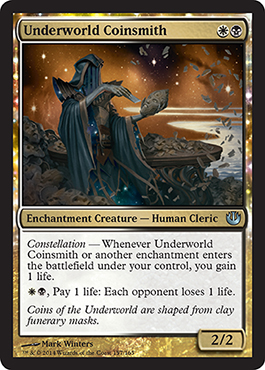 Okay. Soak it in. What exactly is going on here?

For two mana, you buy a 2/2 body. That's pretty average on its own, so clearly the abilities need to pull some weight—and they do. Let's break it down.

First up is its lifegaining constellation ability.

The 1 life may not seem like that much, but it can add up very fast if every card you cast is triggering the ability. It's not unusual for a turn-two Coinsmith to end up gaining 5 or more life over the next few turns. And, if your opening hand has multiples, it can get especially crazy. Turn-two Coinsmith into turn-three Coinsmith will jump your life total ahead by 2 for each enchantment you play!

And, fortunately, you can put all of that life to good use with the second ability.

The Coinsmith, however, can just finish off an opponent over the course of a few turns. On a stalled board, if you're ahead on life—which hopefully you are thanks to constellation—you can plink away at whatever your opponent has left. If you draw a spell, great, and if you draw any lands, that's also great: it only serves to increase the number of activations of the Coinsmith per turn.

So, how can we go about building decks with this new card? Well, today I'm going to cover two different ways you could take it. Let's take a look at one of them!

It feels like this deck is the culmination of everything Standard has been building up to. For months, people have been trying to put the pieces together, and now the enchantment aggro deck is finally getting a number of cards it needed. It's perhaps the most obvious place to take this card, and for good reason: it fits perfectly!

One way to go with this kind of deck is a Meletis Astronomer deck, but I did that not too long ago and my version with black wouldn't be all that different from the white-blue version I ended up with. Instead, I'd rather focus on something a little different.

Let's take a look at this white-black aggro deck:

Okay, okay, so realistically you probably want some nonenchantments like Thoughtseize and Hero's Downfall. (And perhaps Pack Rat.) But it just felt appropriate to show you the all-enchantment (lands aside) deck for my first Journey into Nyx article! And, since you're probably asking, yes, I have to keep the lid on what Athreos does for now, but don't worry: you'll know soon enough!

Something you'll notice is that a lot of popular black cards in Standard ding your life right now. Herald of Torment and Underworld Connections are two, and of course Thoughtseize does as well. Underworld Coinsmith helps you reverse the polarity of the neutron flow a bit, helping you to not be crushed under that continuous weight of life loss. Of course, if you do still end up with the life edge, you can finish off your opponent with the Coinsmith!

And, of course, there are a number of other cards perfect for this deck hanging out in the set. There are plenty more cards with constellation—and just regular enchantment creatures as well. Keep your eyes out—an aggressive enchantment deck could be a very real place to turn in just a few weeks' time.

In Magic's history, one of the most typical enchantment-heavy decks to appear is the Enchantress deck. Using cards like Argothian Enchantress and Enchantress's Presence alongside a suite of other enchantments, it sifts through its deck in surprisingly fast fashion and floods the board with powerful enchantments.

And, of course, what would a set that wants to encourage you to load up on your enchantments be without an enchantress of its own? If you caught Mark Rosewater's article yesterday, you would have noticed this beauty: 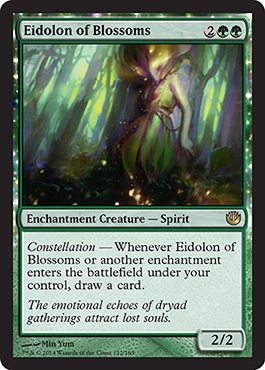 This "enchantress" offers you the traditional power of Enchantresses by turning every enchantment you cast into a new card. As you might imagine, drawing a bunch of constellation cards in a constellation deck can get out of hand pretty fast.

1 Heliod, God of the Sun 4 Eidolon of Blossoms

While I can't show you more constellation cards today, this is certainly a deck that makes good use of them! By amassing a board presence and then creating a cavalcade of repeating triggers, constellation is perhaps at its strongest. Note those two Mana Blooms—Mana Bloom triggers all of your constellation cards each turn, so while it's not that fantastic on its own it often makes for a fantastic engine card as the game gets going on further.

While this deck doesn't have many huge creatures, you can lock your opponent under the grip of Sphere of Safety and bide your time. Underworld Coinsmith not only propels your life total upwards, but also gives you a great way to end the game once you feel secure. It might take a while—but this deck is built to have plenty of time.

Of course, there are some other good routes to victory too. Heliod gives you the long-game advantage (note that his tokens are enchantment creatures!) and a pair of Extinguish All Hope even ensures you can wipe the board and push your creatures through later on.

If you're interested in a deck like this, I'd definitely keep your eye on Journey into Nyx previews—there are a number of good cards that slot right into this deck.

Written in the Stars

And there you have it: a first look at Underworld Coinsmith! I'm excited to see where all of the constellation cards from Journey show up—it's the walking enchantment revolution players have been waiting for since Theros. Time to get out there and build some decks! 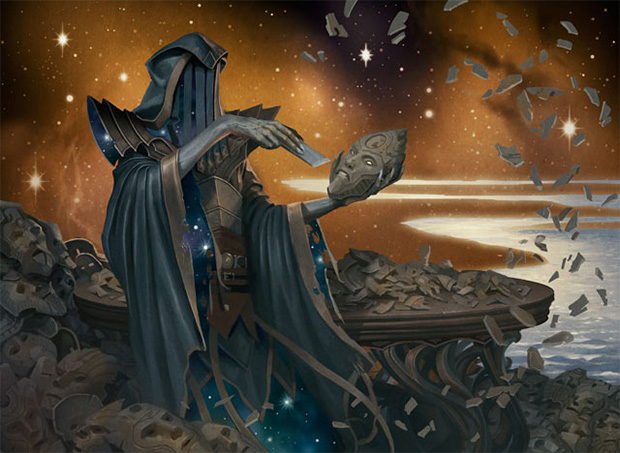 And speaking of building decks, it's time for this week's challenge! Let's see what you can do with some of these new Journey into Nyx cards:

Format: Standard.
Restrictions: You must use/build around one Journey into Nyx card.
Deadline: April 15, at 6 p.m. Pacific Time.

Pick a Journey into Nyx card, put it into a deck, or build around it—whichever you prefer—and send it my way. I can't wait to see what some of you do! I'll note that submissions are open for a week, so feel free to wait and see what some of the other preview cards are before sending anything in—there is plenty more to show off on the website over the course of the next week. (And at PAX East, too!)

If you have any thoughts or feedback on this article, feel free to post in the forums or send me a tweet and I'll be sure to take a look. I'd love to know what you think of constellation so far.

I'll be back next week with a look at one of the set's more oddball cards. Until then, have fun looking toward Theros's constellations!