Theros features many powerful enchantments and Auras—but there haven't been all of the cards you need to build a deck around them.

Well, dinner is most delicious after you've starved a little bit first. And with Born of the Gods, the appetizers are beginning to trickle through.

Things are changing in Born of the Gods. If you've been looking to build your aggressive Aura deck, I have a card you're certainly going to be interested in.

It's finally the kind of hero your Aura deck deserves. Take a look at Hero of Iroas! 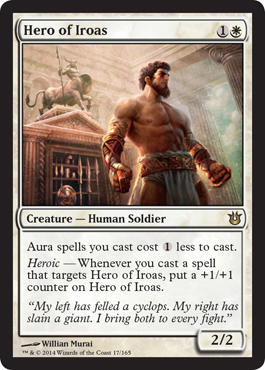 Let's take a moment to let this card sink in.

On the surface, it's a 2/2 for two mana. While that's not exactly breaking any records on the Tarmogoyf Scale™ it is pretty serviceable—nothing wrong with those stats. You can still get in for 2.

Next up, it has heroic for a +1/+1 counter. Okay, not too shabby. Suddenly you can pretty easily upgrade your turn-two play from a 2/2 into a 3/3. (Plus, you get the bonus of whatever you targeted it with.) In a deck with enough ways to target, this is something you could maybe think about.

With just that, this card probably isn't enough to get into your decks. But it's the other ability that makes this card something spectacular and changes everything.

If he's your only heroic creature, then perhaps you'll want to target him so he gets larger—but if you have other heroic creatures or just don't want to put all of your vases into one burlap sack, you can spread it around.

And yes, to answer the question I'm sure you're all wondering: this does reduce the mana cost while bestowing creatures!

I've received a ton of bestow decks over the past couple of months, but there wasn't really enough to incentivize you to play a bunch of bestow cards in the same deck. Hero of Iroas changes that, making the idea of playing a bunch of bestow creatures together much more palatable.

What are a few decks that can put this new card to good use? Well, let's take a look!

If nothing else, Hero of Iroas has heroic and fits into heroic-styled decks quite nicely. He gives the white heroic deck a solid boost while also enabling a few Auras that may have been right on the cusp before. Let's see what one take on this deck might look like:

While this has all the trappings of what you might expect of a heroic deck, there are a few choices made more viable by Hero of Iroas.

First of all, check out those Auras. Madcap Skills and Ordeal of Purphoros are cards that may have been just slightly outside of the spells you'd want to play in your heroic deck before. But Hero of Iroas enables them and provides a nice target to suit them up on, pushing them over to the side of playable.

Another card you might not have expected is Hopeful Eidolon. When this hoper of far-flung hopes costs only

to bestow it quickly becomes a lot more reasonable. That alone wouldn't be enough to get it into the deck... but with the addition of Madcap Skills and Ordeal of Purphoros—two cards that fit well on a Hopeful Eidolon or a Hopeful Eidoloned creature—it starts to look a lot more enticing.

Hero of Iroas here is mostly an aggressive creature that helps you enchant up your entire board and enable your strategy. This is one new and nice angle that a heroic deck could take.

Red-White Heroic is a powerful but straightforward use of Hero of Iroas. Of course, that isn't maximizing the Hero's full potential. Let's move along and take a look at something that does!

This deck unlocks a lot of the potential Hero of Iroas has. Full of bestow creatures, this is an aggressive deck with a ton of options.

Do you play your Leafcrown Dryad on turn two or save it to bestow later? The question of whether you should cast Hopeful Eidolon on turn one becomes a lot more tricky when you also have Hero of Iroas in your hand.

Don't be fooled: While your creatures may not be as impressive looking as creatures with baseline better stats, this deck has a huge amount of synergy working in its favor! All of your enchantment creatures bump up Ethereal Armor, making it a huge bonus for only a single mana. Ajani's Chosen becomes absolutely backbreaking, letting most of your creatures enter with a bonus 2/2. Even the unassuming Auramancer becomes powerful, returning several of your most powerful cards to help you win any attrition fight in the midgame.

You can either play all of your enchantment creatures out in this deck or start bestowing them on top of each other—or a Hero—and attacking with a single huge threat. The choice is yours!

Oh, and I can't quite say what they are yet, but take my word for it when I say that there are several good additions to this deck in Born of the Gods. There are plenty more bestow and enchantment creatures in the set for this deck to choose from.

Bestow creatures are one major form of Auras, but they are far from the only ones. You could also take advantage of Hero of Iroas in a slightly different way. Check this out:

Ordeal or No Deal

Although it is also green-white, this deck goes a pretty wildly different direction than the more bestow-heavy deck.

This deck wants to quickly build up one creature, then roll the opponent with it. Using cheap enchantments that grant evasion, power/toughness bonuses, and/or cantrips, you can quickly build up a threat that will win most races thanks to the amount of life you're gaining.

A key card in this deck? Alpha Authority! This card ensures the creature you're building up is completely safe from targeted removal. Murder Investigation does something similar, at least turning one of your burly creatures into a bunch of tokens in case of emergency. You could definitely consider Ranger's Guile as well.

This deck features Chosen by Heliod as an Aura that draws you a card, and there are certainly other versions of this deck that sport other colors and more cantripping Auras. With Hero of Iroas on the battlefield, these trigger heroic and become a new card for only a single mana. If you were playing something like Battlewise Hoplite (alongside, say, Fate Foretold) you could even churn through your deck of Auras pretty quickly!

If you wanted, you could even evolve this into some kind of hexproof-focused deck, using Gladecover Scout and Witchstalker as reasonable Aura targets. There are many ways you could take this deck—Hero of Iroas opens up all kinds of options!

Thanks for following along this week as I took a look at a brand-new preview card. Born of the Gods is full of goodies for Constructed—and this is just the beginning of what you can expect to see.

In the meantime, I'd love to see some of your decks featuring new Born of the Gods cards! Let's take a look at the mission for this week:

Format: Post-Born of the Gods Standard
Restrictions: Your deck must contain at least one Born of the Gods Card
Deadline: January 20, at 6 p.m. Pacific Time
Submit all decklists by clicking on "respond via email" below. Please submit decklists using the following template. (The specific numbers below are arbitrary, so please don't feel a need to use them—it's just how an example of how a decklist should look when laid out.)

What cards have caught your eye from the set? I'm exciting to find out! Take your time if you'd like, as more cards are revealed throughout the week—I'll be waiting for them.

If you have any thoughts or feedback you'd like to send my way, feel free to send me a tweet or post in the forums and I'll be sure to take a look. Let me know what you think about Hero of Iroas!

I'll be back next with a look at another Born of the Gods preview card. Talk with you again then!