Posted in Reconstructed on November 13, 2012


This week on ReConstructed, the Izzet guild will be made proud. The Johnnies will raise their ears. And the people at PETA—Planeswalkers Evading Trying to Attack, of course—will hopefully finally be happy about my use of creatures. 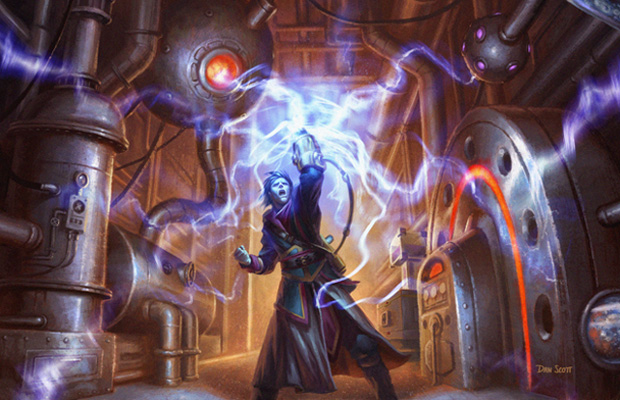 Let's take a look at the decklist for today's epic shenanigans, sent in by Jack Turtle.

At its core, this is a deck that seeks to mill out your opponent. It accomplishes that goal ultimately by using Psychic Spiral for a large amount. But it just wouldn't be Izzet unless you had to do mad science to get there.

What really is going to happen is you're going to spend the early game playing lands, drawing cards, and fending off creatures. Reforge the Soul may happen intermittently as well, refilling you on gas and also digging your opponent deeper into his or her deck. Then, finally, you can start thinking about Epic Experiment.

There are two levels you want to set your Experiment at in this deck: X=5 and X=7.

At 5, your experiment catches your core spells that help mill your opponent—like Reforge the Soul and Psychic Spiral—while also setting up with cards like Thoughtflare and Izzet Charm. However, X=5 is more of a "setup" card. It's unlikely to actually win you the game outright. Where it's really at is X=7.

At 7, your Experiment hits Temporal Mastery, ensuring you have an extra turn (or two... or three...) to find any missing piece you might have. By this point in the game, you should have enough in your graveyard to win with reasonable Experiment flips.

Some of you may have seen the green Epic Experiment decks that use Farseek, Ranger's Path, and Boundless Realms to set up for a huge Experiment quickly. This deck plays much more of a control game, getting to nine mana the hard way by killing creatures and buying time.

Let's get into the specifics, shall we?

This is one of the lynchpins of an Epic Experiment deck. You need to draw one—and ideally multiples—each game. Considering you can flip past these with Epic Experiment, discard them at random to Desperate Ravings, and lose any you've been stocking up when you Reforge the Soul, I'm going to want to go up to the full four copies.

Temporal Mastery is another crucial component of this deck. Not only is it awesome to Epic Experiment into, but it also serves as a much-needed form of acceleration. If you miracle into this, you can get something akin to a free Explore. Definitely a card I want to keep four copies of.

This deck is just trying to buy a lot of time to set itself up. Considering Devastation Tide doesn't hurt you at all, this spell is the oncoming storm that will help protect you from creature rushes. A lot of the time, it's not too far off from Temporal Mastery, essentially forcing your opponent to do over his or her turn. I'd like to keep all four.

Reforge the Soul is perhaps one of the more conflicted cards in this deck.

On one hand, it's great for ensuring you can hit all of your land drops and that you keep drawing action. It brings your opponent seven cards deeper to decking and helps fill up your graveyard for Psychic Spiral. It can even do some cute things alongside Devastation Tide.

On the other hand, Reforge gives your opponent even more tools to fight you with. It's also awkward in a deck full of miracles; out of all the cards you draw you might easily find a couple more dead miracles in there. (Granted, cards like Izzet Charm let you pitch extra miracles away.)

I like having some Reforge the Souls to keep the deck moving, and after playing this deck a little I think you definitely need to have some ways to help opponents dig deeper into their library so Psychic Spiral hits lethal range quicker. Still, I wouldn't play the full four. I think about two is where you want to ideally be.

Normally, I like having a little bit of countermagic in my combo decks. However, this deck is a different story. Dissipate doesn't do anything for you when you Experiment into it, and I can't really justify playing a card that is both a three-mana reactive card and doesn't help you at all while comboing off. Fortunately, Izzet Charm can help you out a little bit on the countermagic front while also providing a useful primary effect.

Izzet Charm is awesome for a combo deck like this. It can help deal with early creatures, filter to whatever piece you're looking for (while discarding dead cards in the process), and even act as light countermagic. I want to keep in the full four for sure.

This deck wants to quickly filter for the cards it's looking for, and Desperate Ravings helps you do that—while adding a card to your graveyard in the process. Yes, it is random discard, so occasionally you can discard the card you needed—but that's a risk you have to weigh as you cast the spell.

Usually, it is perfectly fine to cast one of these. If you're in a really good position and only disastrous things can happen from casting it—for example, if you're planning to use your one Epic Experiment next turn—then just don't cast it. Desperate Ravings is a fantastic draw engine for this deck.

This is the kill condition of choice. You definitely need to play enough that you can still kill if you discard a bunch of them or mill past them with Thought Scour, but at the same time you don't want to risk drawing a bunch of useless Psychic Spirals early on. About three copies seems right, since you want to find them often enough. They are too bad to draw, but you have enough looting effects that you can throw away ones you draw pretty easily and then use the one you find to put the others back into your deck.

Spelltwine can act as extra Psychic Spirals if they all end up in your graveyard somehow, while also serving as redundancy. However, sometimes they're not that exciting to Experiment into since you choose the targets as you cast it and the cards you cast off of Experiment don't end up in your graveyard until they all resolve. It also requires your opponent having a target to be able to cast it, which can be a factor in some matchups. While the flexibility is nice, I'd rather strengthen the deck's core and cheap plays than use Spelltwine.

Thoughtflare is the kind of "big draw" effect that a deck like this is looking for. I generally prefer this to Reforge the Soul. You keep your hand so you can craft it to your desire, and it doesn't benefit your opponent at all. (Although it also doesn't put your opponent seven cards deeper into his or her deck.) I definitely want to keep this in the deck, and even bump up the copies to help me filter through even more cards.

Cheap "cantrips"—or cards that do a small effect and then draw you a card—like this help out with Epic Experiment, letting you play fewer lands so you can hit spells more often on Experiment. As a result, I'd definitely like to play more cantrips. But which ones? We'll get into that a little more in a moment.

With a couple holes made in the deck, there are a few new additions I haven't already mentioned. Let me run down them.

This deck definitely needs more ways to interact with creatures or else it risks getting run over long before you hit nine mana. Mortars helps out a lot here, serving as a removal spell on turn two that also can overload and remove most of the opponent's board come six mana. While it doesn't help you combo off when you flip it via an Epic Experiment, it at least takes down a creature in the process—which is more than Dissipate can say. I want to play the full four to help retaliate against creatures further.

A moment ago I was talking about adding more cantrips. So, which ones does this deck want? There is certainly a debate to be made between Thought Scour and Faithless Looting. Looting has flashback and lets you just see more cards, giving you far more options than Scour. However, there are a few downsides.

First of all, you can't Faithless Looting on your opponent's turn to give yourself more looks at a miracle. Second, the digging from Izzet Charm already puts you down cards in hand (although you do "draw" another copy of Faithless Looting with the flashback) and this deck wants a lot of cards to operate. You often need all your lands and your action cards, so your ability to improve card quality isn't as meaningful as usual since you're just making slight upgrades. On the flip side, cards like Reforge the Soul help you refill once you've tossed a bunch of your cards away.

Both sides have merits. Overall, I think I'd prefer to split them. Thought Scour works well alongside more flashback cards, giving a compelling reason to try both. Two of each is what I'd recommend starting with.

That brings the decklist to:

If you're looking for a wacky Izzet deck to play at your next Friday Night Magic , this is something worth checking out. It can go big with Epic Experiment, all the while using some Izzet control elements to help you get there. Give it a try!

If you're looking to scratch your Izzet itch some more, there's plenty more Izzet wackiness where this came from. Take a look at some of my other favorite Izzet decklists that were sent my way!

4 Pillar of Flame 2 Bonfire of the Damned 3 Syncopate

2 Bonfire of the Damned 3 Jace, Architect of Thought
75 Cards

4 Call to the Kindred

4 Laboratory Maniac 4 Sphinx of the Chimes

4 Sphinx of the Chimes
60 Cards

4 Bonfire of the Damned
95 Cards

4 Pillar of Flame 1 Mizzium Mortars 4 Past in Flames

4 Pillar of Flame 2 Bonfire of the Damned

4 Thunderous Wrath 1 Into the Maw of Hell