hat would you say if I told you there's an exciting, very accessible format that you may have never heard of? That it has a deep card pool, but yet some of the top cards include Spire Golem and Loyal Cathar? And that it's hidden right under most Magic players' noses, nestled in Magic Online?

Well, such a format actually exists and is definitely a lot of fun! Welcome to Pauper.

If you've never played Magic Online Pauper before, the rules are simple: any card is legal... as long as it was released on Magic Online somewhere as a common. (And isn't on the short banned list.) Let's look at a few example cards:

Strategic Planning? Yes! Although uncommon in face-to-face Magic, it is common in the Magic Online–only Master's Edition III.

Red Elemental Blast? No! Although common in Revised, it's uncommon in Master's Edition IV, the only place where it shows up online. (Although Pyroblast is certainly legal.)

Serrated Arrows? Yes! Although Homelands isn't on Magic Online, and it was timeshifted rarity in Time Spiral, Serrated Arrows appeared in Duel Decks: Garruk vs. Liliana as a common!

As you might be able to tell, since Magic Online has released older cards in different ways (namely, Master's Edition), Pauper has a bit of a unique face. It's a format we've come to consider when we work on Duel Decks or similar unique products, to help change up the format just like how we change up Standard. (Or, as the case may sometimes be, make sure something problematic isn't printed at common so that it doesn't hurt the format.)

And if you're not sure if you're willing to believe that, well, then just .

Madman With a Deckbox

"Have I gone mad?"
"I'm afraid so. You're entirely bonkers. But I'll tell you a secret. All the best people are."
—The Mad Hatter, asking Alice a question, Alice in Wonderland 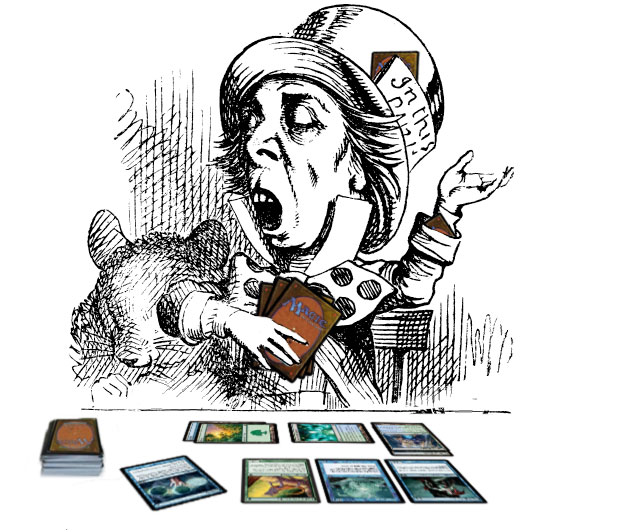 
In a format full of fair(ish) common creatures, there aren't too many huge threats running around. (Which, by the way, is part of what makes Serrated Arrows a potent weapon against some decks.) But in a land of Ravenous Rats and Spire Golems, a 4/4 is king.

for? Even more frightening.

But let me back up. If you've never played or really interacted with a madness deck before—and it's such a niche ability that I can't really expect you to—I want to run you through the basic idea. Madness has traditionally been a pretty tempo-based deck, centered in blue and green. Because madness both lets you pay less mana for your spells and play them at instant speed (provided you can discard them at instant speed) you can operate your aggressive strategy at times other than what your opponent might be used to.

What are the key madness supporters to make madness work? Oh, just some cards like Wild Mongrel, Aquamoeba, Merfolk Looter, and Careful Study. You know. All commons.

In fact, with this addition, nearly all of the cards to play the old Standard and Block Constructed GU Madness cards are now legal in Pauper. GU Madness was a Pro Tour–winning deck!

An important thing to understand about madness in Pauper is that Basking Rootwalla is already a playable card. Some aggressive decks just play it, ye olde 1/1 pumper for

. But in a deck like this, where you can consistently cast it for free, it's going to be even stronger.

If I was building Pauper Green-Blue Madness, I'd start with something like this:

Gavin Verhey's Madman with a Deckbox

Of course, while the deck everybody playing back then remembers is blue-green, there was actually another popular madness deck as well! Going by the lovely name of Frog in a Blender, this red-green deck came out of the gates quickly and didn't let go.

Considering there's already a reasonably popular red-green deck in Pauper that features both Wild Mongrel and Basking Rootwalla, it seems like it could be a serious contender now that it's armed with Arrogant Wurm! Check it out:

Madness isn't the only deck that's going to be given some new cards by way of Vintage Masters. While madness has the potential to spawn an entirely new archetype, plenty of other decks are going to pick up a card or two. And there's one card in particular that's going to slot right into one of the top decks in Pauper right now.

If you love Goblins, then !

The red deck in Pauper primarily takes the shape of Goblins. While it's not particularly innovative, it makes sense: Goblins appear in most blocks, and they do tend to show up at common a lot. And with a super-low curve using cards like Foundry Street Denizen and Goblin Cohort, they can pack a punch quickly!

In Pauper, Goblins have mostly had to rely on cards like Goblin Sledder and Goblin Bushwhacker to use as a makeshift "lord"... but now with the General in the mix, they're going to hit harder than ever.

Here's a look at how I would Generally build Goblins for Pauper:

Full of super-cheap guys and ways to pump them, this deck isn't the card-advantage-heavy Goblin Ringleader deck you're used to. I don't even think Skirk Prospector is that exciting, since you're just going to sacrifice a cheap Goblin to power into another cheap Goblin, mostly. This deck so demands having creatures that it's probably the closest I've ever come to cutting Lightning Bolt in a Pauper red deck!

Interestingly, Sparksmith isn't quite as strong in a deck that just wants to flood the board with one-mana Goblins, when all you want to ping are 1- and 2- toughness creatures... but it's still strong enough that I wanted to include four of it. Dragon Fodder would be a four-of if Goblin Cohort and Mogg Conscripts didn't require an actual creature spell to be cast.

If you're looking to get into Pauper, this is a great place to start full of easily acquired cards. Give it a try!

Hopefully, you enjoyed this window into Pauper. It's been a requested format for me to take a look at ever since this column started, and I'm glad to finally have taken the chance to! If you'd like to see more like this, please let me know.

Also, it goes without mentioning—but if you're fans of decks like these, you're going to want to draft Vintage Masters. It's one of the most fun Limited formats I've ever played, right up there with (and possibly surpassing) Modern Masters! Considering all three of these cards are commons, that means—yep, that's right—that Madness and Goblins are both common archetypes you could draft in Vintage Masters. Be sure to check out the set when it goes online!

Now, down to the next deck building challenge! All of this talk about Pauper has put me in the mood for some budget deck building! In two weeks from now, let's take a budget look at Standard:

Format: Standard
Restrictions: Your deck should be built on a budget. For a loose definition, consider budget to contain few rares and very few, if any, mythic rares.
Deadline: May 19, at 6 p.m. Pacific Time.
Submit all decklists by clicking on "respond via email" below. Please submit decklists using the following template. (The specific numbers below are arbitrary, so please don't feel a need to use them—it's just an example of how a decklist should look when laid out.)

I always look forward to the innovation in my budget challenges. Let's see what you throw me this time around!

In the meantime, I'd love to hear any thoughts or feedback you have on this article. Feel free to let me know what you think by posting in the forums, sending me a tweet, or serving your thoughts to me on my brand-new Tumblr. I always read every piece of feedback that's sent to me, so if you have something to say, go ahead!

Have fun watching Pro Tour Journey into Nyx this weekend, and I'll be back next week when I take a look at Conspiracy (the card) for Conspiracy's (the set) preview week! Talk with you soon.