Posted in Reconstructed on February 26, 2013 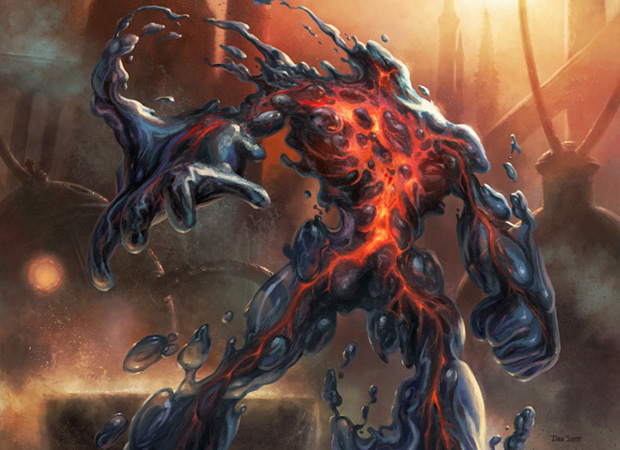 Modern has been one of my favorite formats since it debuted, and each time I run a deck submission challenge for it I receive incredibly varied and exciting decks. I never know what to expect.

You all did not disappoint.

Not only did I receive my favorite batch of Modern decklists yet—definitely don't miss the list of honorable mentions at the end of this article—but there was one in particular that immediately grabbed my eye and didn't let go. In fact, my level of enthusiasm was so high that I started telling random passersby at my Magic R&D desk about it, and then shortly built it in Magic Online so I could start playing with it.

This deck comes straight from Japan, reminding me how international my column's reach is. Take a look at this deck built by Masatomo Iwayama!

As is the case with most combo decks, it's not immediately apparent what's going on here. Peek? Quicken? Cerulean Wisps?!? That doesn't even begin to touch on it playing only ten lands. What is going on here?

The answer is this two-card combo:

Let me describe one not-unusual draw with this deck.

No, you read that right. Immediately after loading this deck up on Magic Online, I won multiple games on turn two.

The combo works like this: Blistercoil Weird untaps and gets +1/+1 each time you cast an instant or sorcery. Paradise Mantle allows the equipped creature to tap for one mana of any color.

This means that if you have a Blistercoil Weird with a Paradise Mantle and you play a bunch of one-mana instants and sorceries that draw you a card, you can quickly cycle through your deck. You can tap the Weird for a blue mana, cast a Quicken-like spell, which draws you a new card, and in turn untaps the Weird. Better yet, cards like Manamorphose and, yes, Cerulean Wisps actually net you extra mana on each casting.

Eventually, you can attack for 20+ damage, Grapeshot your opponent for 20, or use a mix of both.

Now, this isn't to say that you always win on turn two. It's a two-card combo: you need both pieces. Fortunately, when almost the entire rest of your deck is made up of cantrips, it's pretty easy to find the two cards you're looking for and set up the combo by turn three or four.

With some tweaks, I was able to get the deck to win pretty consistently on turn three with presenting a turn-two victory almost anytime I had both combo pieces in my opening hand.

Speaking of tweaks, let's go into the individual card breakdown!

Although a lot of the cards in this deck do similar things, there is still plenty of room to tweak them to improve and streamline the functionality. Let's take a look!

This is one of the core combo pieces of the deck and you absolutely have to play four. The interesting question, to me, is if you should supplement it with any other win conditions.

Which cards am I referring to exactly? Well, Nivmagus Elemental is certainly a card you could consider to help you out. If you don't want to try and assemble the combo, you could just throw all of your spells into the Elemental and try and beat up your opponent that way.

The downside to this, however, is that you end up with more cards in your deck that are dead while you're trying to combo out. You can't afford many of those or else you risk your combo fizzling too often. Additionally, while removal does break up your early combo, you can also try and get around a single removal spell with multiple Weirds. After sideboarding is when I'd consider a card like Nivmagus Elemental (or something disruptive, such as Inquisition of Kozilek or Mizzium Skin), but in the main deck I'm content just relying on this two-card combo to defeat my opponents.

This card is irreplaceable and a necessary combo piece. I'm definitely playing the full four.

Serum Powder is an interesting inclusion you don't see that often. In a two-card combo deck that aims to win right away, it's certainly a card worth talking about. The card makes your combo overall more consistent by providing you with "free" mulligans.

However, nothing truly comes for free. The downside of playing with Serum Powder in your deck is that it gives you a bunch of dead draws in the middle of your combo. So many so that it isn't worth it. Additionally, you will occasionally have perfectly fine hands with half of the combo that would look much more appealing if this Serum Powder was simply another cantrip. (A cantrip is a card that does something small and then draws you a card.) While it is theoretically appealing in a deck like this, the problems it poses aren't worth the inclusion.

Grapeshot is usually important for killing your opponent—but a dead draw while comboing off. You also can't risk milling both of them away to your Thought Scours. Four is too many, and one is definitely too few—so either two or three is the right number.

There are benefits to each. With three Grapeshots, you can often kill your opponent even if your combo starts to "fizzle" out because you have a higher chance of finding one. With two, that's not quite as true.

After trying it both ways, I slightly prefer two Grapeshots to three. It just adds to the number of cards that can break your combo while you're trying to go off, and usually when you start going off with my final version of this deck you seldom fizzle. I think two is the right number.

I'm going to group these all together, then go over them individually. But first, I should note what's important about these.

The key part of these cards is that they all draw you a card, and then either cost one mana or give you the mana back. (Like Manamorphose.) You need a critical mass of these to be able to keep the chain going through your deck. There is room for some two-mana cards here—but I'll get into that later.

First, let's go over the most important ones that the deck definitely needs.

Serum Visions and Sleight of Hand are both definite four-ofs because they improve consistency and help you find the pieces you're looking for, whether you're setting up or comboing off. Gitaxian Probe, Manamorphose, and Cerulean Wisps all generate extra mana for you since they can be cast for free, give you mana back, or untap your Weird an additional time, respectively.

After that, there's certainly some debate you can have.

Thought Scour and Visions of Beyond seem a lot more exciting than they actually are. Visions was necessary in the original build to make sure you could hit critical mass, but with the tweaks I made it slowly became less necessary. It does play nice with Thought Scour, but Thought Scour has the downside that it can mill past your Grapeshots accidentally. In the end, though, these two are definitely worth keeping.

Peek is fairly weak overall. Sometimes you just want to know, but often, you have to go for it regardless of what is in your opponent's hand. You already have Gitaxian Probe if you really need that knowledge.

The weakest one, by far, however, is Quicken. It doesn't really have any other effect within the deck, unless you're planning to try and go off in your opponent's end step or something like that. That's not nearly an attractive enough reason to me. This is definitely the one I would cut.

So, what's worth adding?

Well, there are two cards I found to perform particularly well.

The first is Faithless Looting. This card is perfect for this deck. While you're comboing off, you end up with extra Weirds, Mantles, and lands in your hand, and this converts those into extra cantrips. You can also use it to dig for the combo early on. Finally, sometimes you'll run into situations where you use Wisps, Probe, and Manamorphose to generate plenty of mana, but are running low on cantrips. The flashback comes in handy here, helping you out further.

The second card I added is actually a strange card from a while back: Ideas Unbound.

When going off, you can often get up to a second mana but need to restock on cards. Ideas Unbound does that quite well. Since you go off all in one turn the downside isn't relevant while going off, and you can even use it to dig early on if you need to. Two mana for three cards is the best deal you're going to find. You don't want your opening hand to be full of them, but you definitely want to find them once your combo is rolling along.

Some other cards I considered were Aphotic Wisps, Crimson Wisps, and Burning Inquiry. Overall, I was more happy with Peek, but I'd keep all three of those in mind.

Burning Inquiry helps you find more gas, Aphotic Wisps makes the attacking kill easier if your opponent has a creature in the way, and Crimson Wisps lets you play a Weird and combo out in one turn. I'd consider these while working on the deck further. (Keep in mind that both Wisps require a creature in play to cast them, so you can't cycle them early on.)

The final change was to the mana base. Fetch lands fill up your graveyard quicker for Visions of Beyond and also thin your deck, which, while not normally statistically relevant, can be very relevant when you're planning to draw thirty cards in one turn and need to keep chaining cantrip after cantrip.

I also added a Steam Vents so you can cast cards like Faithless Looting and Manamorphose without a Paradise Mantle active. However, if you're looking to build this deck on a budget (and it is definitely a budget deck to begin with) these land elements aren't crucial.

That brings the final decklist to:


With Seething Song out of the picture, if you've been looking for a blue-red combo deck in Modern this is something I would definitely give a try. While it can be a fragile combo, after sideboarding there are a lot of cards you can use, like Inquisition of Kozilek, Izzet Charm, and Apostle's Blessing that help you sidestep the removal.

Main deck, if your opponent doesn't have disruption, this is faster than all of the other popular combo decks in the format. With the ability to just win many games on the second turn, it's not to be overlooked. Give it a try!

There were a lot of great Modern decks submitted this week. Take a look for yourself!

4 Proclamation of Rebirth 3 Wrath of God

3 Fury of the Horde