Posted in Reconstructed on November 26, 2013

he idea of "underplayed" means different things to different people.

This week on ReConstructed, I was sent plenty of decks from all three!

The challenge for this week's article was to send in your Standard decks featuring an underplayed card—and the variety was immense! Seeing such a wide spectrum of decks and interpretations was wonderful, and if you're looking for a cache of ideas be sure to check out the honorable mentions at the end of this article.

However, only one is going to be the focus of this article. So, which deck was going to have the spotlight put on it this week?

At its core, this deck is a blue-red-green midrange deck. Sporting a smattering of removal and some efficient creatures topped off by a bit of card advantage, this deck can go over the top of the aggressive decks while also throwing threat after threat at the control decks.

But what makes this deck really unique is Zhur-Taa Ancient.

Doubling your mana is an incredibly potent effect. Cards like Heartbeat of Spring and Mana Flare have been put to good (or, in the eyes of some, not-so-good) use in the past. Of course, it comes attached with a downside: you double your opponents' mana as well! And to make the problem worse, they get to use it first.

...Or rather, they usually get to use it first. With the new Theros addition of Prophet of Kruphix, you can flash out a Zhur-Taa Ancient at the end of your opponent's turn, then untap and have full access to the wealth of mana it provides. To make things even better, all of your lands will untap on your opponent's turn thanks to the Prophet—letting you unload your hand in no time at all.

The key to success with this deck is going to be to figure out how to best spend that mana. You'll only get one reliable shot at the Ancient before your opponent starts casting spells to mess with your plans. If you had one big spell you could cast, what would it be?

Well, the good news is that there are some solid options. But I'm getting ahead of myself—let's move onto the next step: the deck breakdown!

Which cards should stay around and which cards are ancient history? Let's go through the deck card by card and note what works and what doesn't!

While there are a few different game plans going on in this deck, Prophet helps enhance all of them. Even if you don't draw an Ancient, the Prophet helps you double up on mana to cast things like Prime Speaker Zegana and activate Polukranos. With Zhur-Taa Ancient, it gives you access to the mana first. While they don't do anything special in multiples, these are an integral enough phixture of the deck that I'd like to still play four.

Traditionally, Standard RUG decks have some kind of mana ramping creature in them to help power out their huge threats faster. This deck is no exception. While Caryatid doesn't work particularly well with Zhur-Taa Ancient, it's still such a good form of acceleration—and one that blocks to boot—that it's well worth it.

I'd like a bit more acceleration than just Sylvan Caryatid—and fortunately there's a card just for the job: Voyaging Satyr. While normally I'd turn to Elvish Mystic, the ability to untap lands as opposed to just generating mana works well with Zhur-Taa Ancient, actually ramping you in the way you want. This deck doesn't have any three-drops anyway (and often you'll be playing a Temple on turn one), so you can't accelerate a first-turn Elvish Mystic into a three-drop anyway. Four Satyrs it is!

One of the defining green cards of the format, Polukranos has been wreaking havoc elsewhere—and this deck is a perfectly good spot for him as well. Not only can he apply some pressure as a 5/5, but his monstrosity ability goes well the ability to double all of your mana. Although he is legendary, I don't mind playing four. Drawing multiples is fine since monstrosity provides a way to use your mana—plus, if any are stuck in your hand that means your opponent didn't kill your Polukranos, which is good news for you anyway!

I do love Master Biomancer—but I don't think this is the deck for it. It's not really contributing much to the primary theme and plan, and while the counters are nice to help beatdown with (and cute with Prime Speaker Zegana), it isn't contributing to a plan at all. There are enough other directions in this deck that the Biomancer isn't really what this deck is looking for.

The build-around card of this deck, Zhur-Taa Ancient is doing quite a bit. I want to draw one every game to try and set up the combination with Prophet of Kruphix, so I'd definitely like to add a fourth.

The larger question to me is: what are you doing with Zhur-Taa Ancient? If you got to cast any one spell, what would it be?

Well, go big or go home. It's time to Enter the Infinite.

Setting up Prophet and Ancient should win you the game—and Enter the Infinite does that. Only requiring six lands with Ancient on the battlefield, resolving it gives you your deck. What then?

Well, pass the turn, untap as your opponent does thanks to Prophet of Kruphix, and then—in upkeep—flash in this big guy:

Discard all of the lands you just drew and that should be enough to kill your opponent without much problem. You can even play one Negate (which you'll find with Enter the Infinite) to help protect yourself from any countermagic or other shenanigans on that turn.

But what about the games where you draw Enter the Infinite but are having trouble assembling the combo? That just puts a useless twelve-mana spell in your hand.

Oh, I thought about that too. And I'd even say it's a bit of genius.

This deck has a pretty high mana curve overall, and with a twelve-drop in your deck, Blast of Genius lets you kill your opponent out of nowhere. I'm even happy to play three copies of Blast, knowing that against any deck that plans to disassemble your board—a natural answer to this deck—you have a way to win without ever needing to use a single creature.

This deck had a light evolution and +1/+1 counter theme between Fathom Mage, Zameck Guildmage, and Master Biomancer (with some help from Prime Speaker Zegana and Polukranos), but that is out of place enough with what the rest of the deck is doing (especially now) that it isn't really necessary at all.

While having a Zameck Guildmage with a ton of mana and a Prophet of Kruphix is cute, if you're in that position you should be in good shape anyway. Fathom Mage is just a slow card to get rolling that isn't proactive enough. Both of these cards can pretty safely go.

The Prime Speaker is a pretty good fit for this deck overall. She nets you a few cards, will usually have a good-sized body, and is even a creature, so you can flash her out with Prophet of Kruphix. However, she is also six mana—and this deck is definitely pushing the ceiling, mana curve-wise. I'd definitely consider sideboarding more, but I'm happy keeping the main deck with just two. 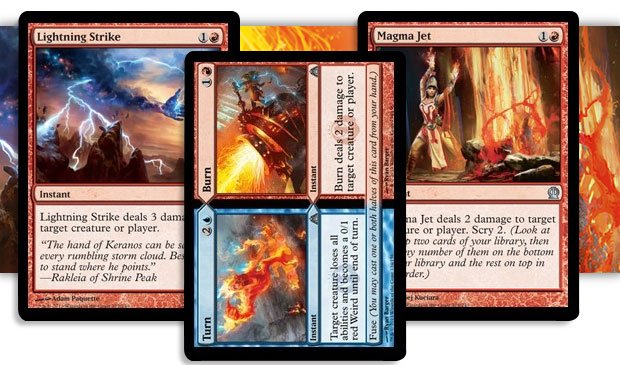 As always with burn spells in Standard, it seems there's a good variety to choose from. How do you pick?

Well, in this instance, I definitely want to max out on the one that helps me to dig for certain cards. Especially with the Enter the Infinite-Blast of Genius combo in my deck, I want to be able to find it on time.

Lightning Strike isn't quite what I'm looking for—the extra damage is nice, but in a deck like this I'm looking for an additional effect attached to the damage as well.

Turn & Burn is a good answer to a single Master of Waves (as long as you just cast the Turn half you can target a Master of Waves and temporarily erase its elemental-pumping ability to kill all its elementals) and also helps strike down big creatures you might have a tough time with otherwise like Polukranos. It even has a converted mana cost of five for Blast of Genius! I'm happy using my two remaining allotted removal spots on these.

It's also worth noting that Mizzium Mortars is a good sideboard option for creature-heavy decks—especially since all of the extra mana helps you overload it quicker.

Putting more lands onto the battlefield is exactly what I want to be doing for Zhur-Taa Ancient, but Urban Evolution costs five mana and I have to cut down on the amount of expensive spells somewhere. (Plus, I already have some draw threes in the form of Blast of Genius.) I'm going to cut these.

With all of those changes in mind, that brings the deck to:

3 Blast of Genius 3 Enter the Infinite

This is definitely a deck that can attack from many different angles.

Running low on removal? You can die to Zhur-Taa Ancient and Enter the Infinite. Not ready for spells? Blast of Genius is going to cause you problems. Focused in on killing a key creature? You're going to have Polukranos and Prime Speaker Zegana to contend with. This deck has a lot of routes it can go down.

Build this up and try it out for yourself, perhaps at your next FNM. Have fun!

What were some of the other great decks sent in? Take a look at some of the most interesting ones and see what sparks your fancy!

3 Heliod, God of the Sun 4 Door of Destinies

4 Five-Alarm Fire 2 Chained to the Rocks

4 Gods Willing 2 Chained to the Rocks

Mark Ian Alloso's Tymaret and the God of the Forge

2 Curse of the Swine 2 Hidden Strings

1 Staff of the Death Magus 2 Whip of Erebos

Takao Sasaki's Control of the Fates

4 Agent of the Fates 3 Scourgemark 3 Read the Bones

4 Agent of the Fates 3 Read the Bones 2 Ashiok, Nightmare Weaver

3 Fanatic of Mogis 2 Purphoros, God of the Forge 2 Awaken the Ancient 2 Xenagos, the Reveler