Some decks with mana costs reduced so low, it's ridiculous!

back to House of Cards, faithful Johnnies! You've gone two weeks without your hump-day dose of cornball humour and nutball decks. I applaud those who have managed to survive until today. You've all been real troopers. I promise to deliver extra-corny jokes and exceptionally nutty decks in under thirty minutes or they're free. 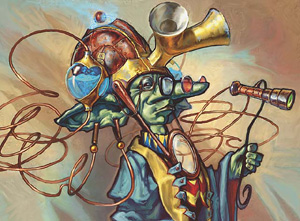 For those of you wondering about the title of today's article and how it applies to building weird decks, I can only try to assure you that it does. If you think I'm just trotting out a Latin phrase from Philosophy 101 in order to make myself sound smarter than I am, well, you are totally wrong. With that kind of logic, you should probably go jump off a cliff with all your friends.

Did I do that right?

Anyway, "reductio ad absurdum" is a coinage of an ancient Greek used-chariot salesman named Aristotle (No, not that Aristotle—the other one). Translated literally, it means: "You can't beat our ridiculously low prices!" Hmm. On second thought, I could be wrong. I might be confusing Aristotle with Honest Ed. Forgive me. My Latin is a little rusty. What it really means is "reduction to the absurd," and if I'm not mistaken, was originally used to describe Mike Tyson's boxing career.

Today, the only thing that's going to be reduced to absurdity is the cost of our magical spells. How much would you expect to pay for two Might of Oaks?

, come see me after class. If you said

, you're right! That's two for the price of one! How about a Sprout Swarm? Eighty, ninety mana? What if I said, "Free!"? Sound like a deal? All you need to do is provide one

up front. Last of all, what are Grinning Totems going for these days? Four mana? Well, we can do better than that.

Ouphes, I Did it Again

Ouphes are a weird tribe. Actually, with only three members (four if you include Mistform Ultimus, but who would want to do that?), Ouphes aren't really a tribe at all. Besides lacking sufficient numbers to even be played in Tribal Wars, their "thing," the mechanical tie that binds them, has very narrow applications. Skeletons regenerate, Elves make mana, Dryads have forestwalk, Ouphes have a quasi-Stifle effect that can only be used on artifacts. That's nice against artifacts that require a sacrifice like Nevinyrral's Disk and Oblivion Stone, but what else? Gnomes, I guess. If your Tribal Wars metagame is overrun by gnomes, you know who to turn to.

Brown Ouphe, which was recently joined by Ravaging Riftwurm on my list of Magic creatures that sound like mosquito-borne intestinal diseases, is the original, and it first appeared in Homelands. It was followed roughly twenty sets later by Fifth Dawn's Ouphe Vandals. After a horrible period of tournament Magic history, dubbed "Ouphe Autumn" by, uh, that guy over there, the player base got sick of the ubiquity of Ouphes and the folks in R&D gave the Ouphe-haters three years to cool down before printing another one. That card, the newest member of the Ouphe clan, is Future Sight's Spellwild Ouphe. This beady-eyed little freak has decided that he's not going to follow in Mommy and Daddy's footsteps. Gone is the single-minded gnome-hosing. In its place is a combination of self-hosing and opponent-hosing. (If you're playing against a gnome, then I guess it's still a gnome-hoser.)

Allow me to explain. Spellwild Ouphe reduces the cost of spells that target it by two mana. The bad news is that your opponent gets to nail him with a Dark Banishing for one mana. The good news, and I'm a real sucker for good news, is that you get to play all of your creature-enhancing spells on the cheap. Moldervine Cloak becomes a permanent Giant Growth for the same amount of mana. You also get your Might of Oaks for half-price, and your Fatal Frenzy's become that much closer to Berserks. In combination, these cards can be used to swing with a lethal Ouphe as early as turn three. Picture this:

Of course, you won't always want to put all of your extra-cheap eggs in one basket like this, so I've put some other excellent baskets into the deck as well. We're in red and green so two cards immediately came to mind. The first is Feral Animist, which has an activated ability that acts as a sort of non-Fatal Frenzy. It's also nice with mana-free P/T-boosters like Llanowar Augur. The second is Radha, Heir to Keld, whose triggered ability complements all of the instant pump spells, instant burn like Dead, as well as the triggered ability of Frenzied Goblin and the aforementioned Feral Animist's ability.

Just for fun, this deck has a Krosan Cloudscraper.

If you move to Extended and beyond, you get a number of excellent pump spells like Sylvan Might, Reckless Charge, and Elvish Fury. Once you pump your Ouphe up to mythic proportions, Seize the Day might be a nice game-ender (especially in multiplayer).

Another option in Standard would be to pair Spellwild Ouphe with black spells. Traitor's Clutch and Snake Cult Initiation have some synergy. Fallen Ideal and Verdant Embrace could work well together. A one-mana Kor Dirge seems like it could take your opponents by surprise.

Locket and Load it

The next cost-reducer on the docket is the, uh, Locket. Boy, I really painted myself into a corner there. Locket of Yesterdays is a cheap little trinket that reduces the cost of a spell by an amount equal to the number of copies of that spell in your graveyard. Basically, you play a spell, it goes to the graveyard, then that spell's cost is reduced by one. It's like getting a discount for something you've already bought. Normally, this offer would expire when you play the fourth copy of any particular spell. That's why we're going to use spells with buyback.

You could be mean and use Spell Burst. I try not to be a mean person, so I will refrain from even attempting a Spell Burst "lock." That's just too cruel. Instead, I'm going to use Clockspinning in conjunction with Reality Strobe and Riftwing Cloudskate to bounce all of my opponent's permanents before making a million Saproling tokens with Sprout Swarm. That seems much fairer.

Thallid Shell-Dweller and Wall of Roots provide early defense, a little mana acceleration, and, not coincidentally, a target for your Clockspinnings. Llanowar Reborn is another nice Clockspinning target if you have nothing better to do. Once you get a +1/+1 counter on a creature, you can use Clockspinning as a blue buyback Battlegrowth. I used Compulsive Research and Careful Consideration because they both help you find Locket of Yesterdays and put spells in your graveyard. Fill up your graveyard with savings, as I always say.

Just for fun, this deck has no rares.

If Teferi, Mage of Zhalfir is getting you down, you can always swap Search for Tomorrow for Into the North, trade the basic lands for snow-covered basics, and add some copies of Mouth of Ronom. You could also punch a wall.

I've Got Sunshine, on a Cloud Key Day

The last of our cheapening agents is the most open-ended of the bunch. Cloud Key can be used to reduce the cost of your instants, sorceries, creatures, enchantments, or artifacts by one mana. Your tribal cards and planeswalkers still cost full price. That still gives you a lot of options. For the next deck, I'm going to choose artifacts when I play Cloud Key. I'm going to pack it full of cards like Gauntlet of Power, Prismatic Lens, and Coalition Relic.

Coalition Relic is the artifact du jour, helping Spike play green and red creatures in his blue and black control decks. Normally, I wouldn't get too excited about a rare three-mana artifact that produces mana, having been burned before by Phyrexian Lens and Ramos' random body parts. But Coalition Relic actually seems good. It's like the world's weakest Mana Battery, but cheaper to charge up and with the ability to add mana of any colour. Why would you want access to every colour of mana in a mono-coloured deck full of artifacts? If you can remember what I said at the beginning of the article, you'll know that answer is Grinning Totem! The Totem lets you play cards from your opponent's library, i.e. you actually have to pay for them. Coalition Relic and Prismatic Lens will allow you to do this with ease, no matter what colour your opponent is playing.

Now, what else are we gonna do with all this mana? Well, I was thinking of taking advantage of the Gauntlets of Power by using Clockspinning. It works so well with Epochrasite (in two different ways), Mindless Automaton, Clockwork Hydra, and Triskelavus, either making them bigger, drawing you cards, or turning your blue mana into direct damage. Tidewalker and Chronozoa are the only non-artifact creatures in the deck. They do fun things with Clockspinning, too, like get big, multiply and/or divide.

Just for fun, this deck is legal in Block Constructed.

I tried to squeeze Mishra, Artificer Prodigy in there, but I wanted to use Gauntlet of Power and I just didn't think I could have both, even with Coalition Relic.

Until next time, stretch your Johnny muscles. You're gonna need 'em.