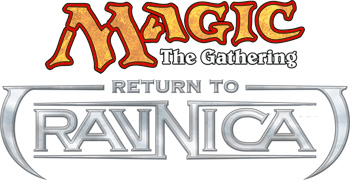 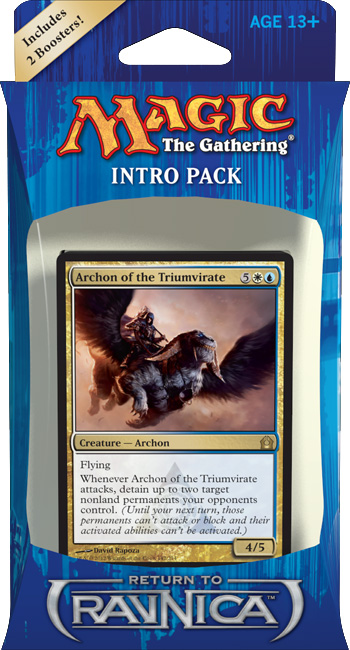 Wield the might of the Azorius, and crush your opponents beneath the weight of the law.

The Azorius aren't the usual tedious, droning bureaucrats. They take a more "activist" approach. Start the game off with a few threats like Concordia Pegasus, Soulsworn Spirit, or Stealer of Secrets, then capitalize on the detain mechanic to ensure that your opponent's threats never get in the way of your attack. Powerful cards like Righteous Authority and Archon of the Triumvirate perform double duty, developing your board while neutralizing your opponent's ability to interact with your ccreatures.

This deck plays out like a classic tempo-oriented deck, putting on pressure from the earliest turns of the game and never relenting until the opponent falls. In a tempo deck, a "pump" spell like Swift Justice saves your attacking creature to fight again another day, and a "bounce" spell like Dramatic Rescue gets a potential blocker out of your way before combat. Evasive creatures like Skyline Predator and Battleflight Eagle will fly right over the top of your opponent's defenses. Don't be afraid to cast your inexpensive creatures with detain abilities when your opponent has no creatures. You have to keep up the attack!

If you want your air force to pack more of a punch, blue-white cards like Geist of Saint Traft from the Innistrad set and the Azorius guild's own Isperia, Supreme Judge can ensure you're always hitting hard. Card-drawing powerhouses like Sphinx's Revelation or the Innistrad set's Sturmgeist can make certain that your threats keep coming. Finally, if you want to keep your opponent's threats locked safely behind bars, look no further than Martial Law, an enchantment that detains a creature of your choice every turn.

1 Tablet of the Guilds 2 Azorius Keyrune

1 Archon of the Triumvirate
35 Cards 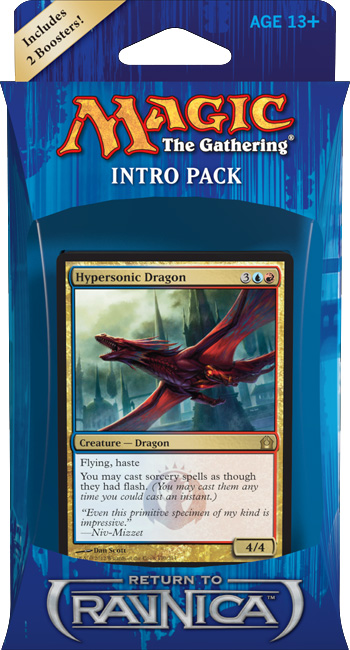 The mad geniuses of the Izzet League are known for their brilliant innovation—and catastrophic experimentation. The "Izzet Ingenuity" deck takes advantage of both. When you win, you win big. Harness the genius of the Izzet League, and immolate your opponents with a flurry of arcane power.

Start out by building yourself an army—the Goblin tokens created by Krenko's Command and Goblin Rally are a good start—then add an air force of flying creatures like Welkin Tern and Runewing. Use Cobblebrute to trade with bigger threats, and attack with a flier when you can. Spend the early turns getting creatures onto your own side of battlefield rather than casting spells to deal with your opponent's creatures.

When your opponents least expect it, pull the trigger with an Electrickery or Teleportal, and they'll never know what hit them. Or untap with a Guttersnipe on the battlefield ready to turn a burst of instant and sorcery spells into tons of damage. Or play your fifth land to cast Hypersonic Dragon and immediately send it in on offense. Or maybe you'll just cast a spell with overload like Mizzium Mortars or Blustersquall to devastate your opponent's defenses and then charge in to end the game.

If you find yourself looking to cast even bigger flurries of spells, the flashback mechanic from the Innistrad block is a great way to ensure that your Guttersnipes and Blistercoil Weirds live up to their potential. Cards with flashback can be cast a second time from your graveyard. If big monsters are more your cup of tea, look to Izzet cards like Utvara Hellkite and Niv-Mizzet, Dracogenius himself. 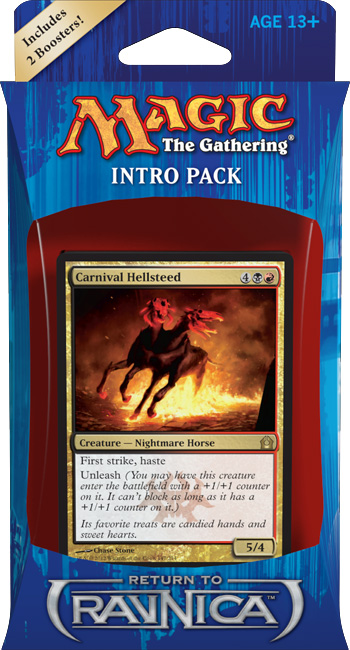 With the "Rakdos Raid" deck, you'll rein in the chaos of the Rakdos horde, and revel in the carnage of your enemy's downfall. At the core of the deck are creatures with the unleash ability. A creature with unleash can enter the battlefield with a +1/+1 counter on it—if it gives up the idea of playing defense. Get ready to start attacking your opponent and hit hard and fast.

In the early game, you should use the unleash ability of nearly every creature you cast. Creatures like Rakdos Cackler and and Rakdos Shred-Freak take chunks out of your opponents' life totals before they can even react. Keep bringing the pain with enormous, high-impact threats like Minotaur Aggressor and Cryptborn Horror, while using your removal spells to kill any blocker that stands in the way.

When your opponents attempt to stabilize by keeping creatures back on defense, spells like Traitorous Instinct and Crippling Blight will punish them for giving you that extra time while you maintain the tempo of your attack. If your assault isn't enough to end the game, you can use cards like Hellhole Flailer and Shrieking Affliction to finish things off.

If you're looking for a few more giant creatures to complement this deck, check out Thundermaw Hellkite from the Magic 2013 core set or Desecration Demon. If you enjoy watching your opponents struggle to keep cards in their hands when you have Shrieking Affliction on the battlefield, try Liliana of the Veil, a planeswalker card from the Innistrad set. If you simply want to bring the maximum amount of power to the battlefield in the minimum amount of time, consider calling on Rakdos, Lord of Riots himself. 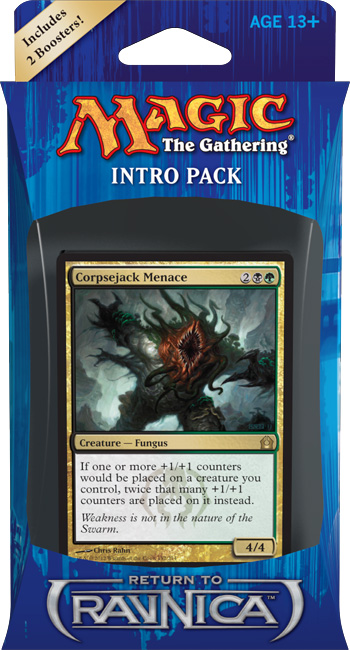 The Golgari don't discriminate based on paltry factors like whether a creature is alive. Any warm—or cold—body will do the job. That's why the scavenge mechanic is so powerful: when you put that card's power back on the battlefield in the form of +1/+1 counters, it's like the creature never died at all!

The first few turns will play out just as they would with any deck: cast creatures, develop your board, remove threats. Eventually, though, your opponents will be forced to kill your Drudge Beetles, Korozda Monitors, and Terrus Wurm. That's when the scavenge mechanic kicks into gear. Pile a swath of +1/+1 counters onto whichever creature you have left, and your opponents can't help but succumb to the assault.

The key to winning with this deck is to always have a creature on the battlefield. Because so many of your cards can be reused from the graveyard, it will often be the best play to trade resources with your opponent. At the same time, though, you don't want to leave those scavenge cards stuck in your graveyard. If you can scavenge, say, a Dreg Manger, to put three +1/+1 counters on a Daggerdrome Imp, you'll be attacking with a 4/4 creature with flying and lifelink every turn. With numbers like that, who cares what your opponent is up to?

If you want to take the graveyard aspect of this deck even further, look to Jarad, Golgari Lich Lord, who can transform a graveyard full of fresh bodies into a powerful asset. Alternatively, if a fast Wild Beastmaster–fueled assault is more up your alley, the regenerating Lotleth Troll provides a ready docking bay for all the +1/+1 counters you'd ever care to throw around. 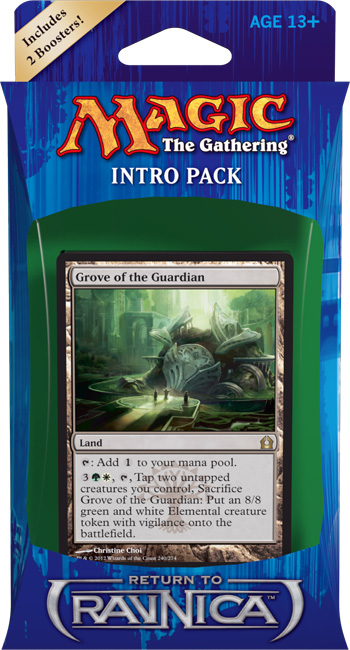 Unite together behind the banner of Selesnya, and take command of an army that adds to its ranks with every step. This deck centers around the Selesnya guild's populate mechanic, which allows you to make a copy of any creature token you control. That means your first order of business is getting a token onto the battlefield as quickly as possible.

Seller of Songbirds, Centaur's Herald, and Call of the Conclave are great token-making cards to get things started. Not only do you get creatures on the battlefield, but those tokens make populate spells like Trostani's Judgment and Druid's Deliverance substantially more powerful as they spawn a creature to go along with their regular effect. Before you know it, your side of the battlefield will be filled with too many creatures for your opponent to handle.

Remember that there's a big difference between having zero tokens on the battlefield and having one, even if it's nothing but a 1/1 Bird. That single Bird can turn into a flying armada with a couple attacks from Wayfaring Temple or get a sizable boost from Phantom General. But the token made by Grove of the Guardian is at the top of the pyramid. If one 8/8 with vigilance is difficult to deal with, imagine what it's like to contend with a battlefield full of them!

If you're looking to take this deck in a different direction, one of the best ways to go is up. Entreat the Angels from the Avacyn Restored set can summon an insane number of 4/4 flying Angels, and the 5/5 Armada Wurm brings along a 5/5 Wurm friend when it enters the battlefield. And like a true guild leader, Trostani, Selesnya's Voice can tap to populate every turn.

2 Call of the Conclave 2 Bountiful Harvest