rigger is someone who deals with rigging—ropes, chains, tackle, or other gear for lifting heavy objects. A rigger might be an expert in ropes and pulley for the transport of ship cargo, a master of scaffolding and trusses for theater work, or someone charged with the important and detail-oriented job of packing parachutes.

Steamflogger Boss has introduced Rigger as a creature type in Magic. The Boss is the operator of a "steamflogger," a steam-powered artifact jalopy designed to "motivate" the pilot's fellow riggers. Note that the machine he pilots has two types of "motivator" appendages—a whip arm and a claw-like appendage. That is some good rigger motivation. But even more is going on in Warren Mahy's art—let's take a look.

The other goblin riggers around the Boss are hefting heavy objects. Note that their heads all have either an X or an O marked on them. The flavor text implies two classes of rigger workers, Xs and Os, that receive different form of motivational technique:

"Whip the Xs! Pinch the Os!
What we're building, no one knows!"

Note also that the Steamflogger Boss himself appears to be an X—both by his head plating and by the X painted on his motivational machine. Do the riggers have a promotional scheme? Did the Boss work his way up through the hierarchy of X-riggery? Or is there some sort of revolving leadership schedule?

Or maybe this guy's actually in charge? 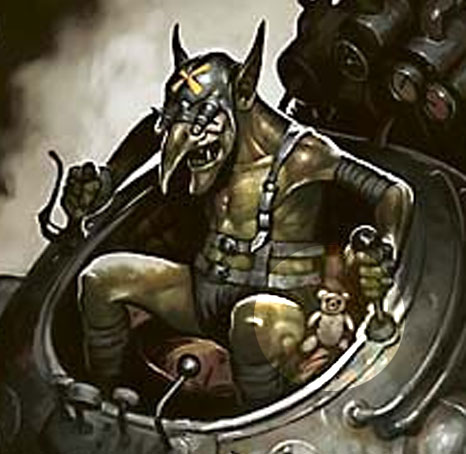