Rise of the Eldrazi Intro Packs 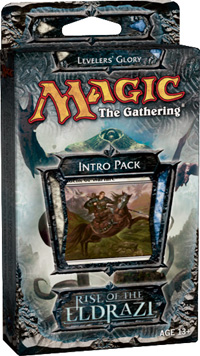 The "Levelers' Glory" deck features the level up ability, which allows creatures to transform and grow over the course of the game. For example, Caravan Escort and Student of Warfare are both 1/1 creatures that cost

. However, after leveling up a few times, Caravan Escort can become a 5/5 creature with first strike, and Student of Warfare becomes a 4/4 creature with double strike! The level up ability doesn't just focus on battle prowess however. Consider Hedron-Field Purists, which at level 5 prevents 2 damage that any source would deal to you or your creatures. Leveling it up quickly is a great way to protect your other creatures.

Your opponent will certainly have creatures as well, but you have the tools to deal with them. Unsummon and Fleeting Distraction can stall or blunt opposing attacks. Narcolepsy can put a creature to sleep permanently, or if that's not good enough, get the entire opposing army dozing with Sleep. Control a smaller creature with Domestication and use it against your opponent. With these weapons at your disposal, you'll have no trouble keeping your opponent out of your hair long enough for your creatures to lead you to victory.

Many other Rise of the Eldrazi cards can help the "Levelers' Glory" deck. First, look for more creatures with level up, like Ikiral Outrider, Knight of Cliffhaven, and Skywatcher Adept. Any of these will make your deck stronger. Try using them and your other "levelers" with Time of Heroes, an enchantment that gives each creature you control with a level counter on it +2/+2. Finally, Transcendent Master is perhaps the most fearsome leveler of all, growing eventually to 9/9, gaining lifelink, and becoming indestructible! 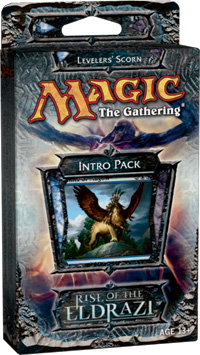 The "Levelers' Scorn" deck puts you in control of the "levelers," creatures that become more powerful over time. Once suitably leveled up, Skywatcher Adept gains flying and Hada Spy Patrol becomes unblockable. Such evasive creatures are perfect for defeating a helpless opponent. With just two level counters, Echo Mage gains the ability to copy each instant or sorcery spell. Use defensive measures like Wall of Bone and Phantasmal Abomination to make sure you have time to level up your creatures to maximum potency.

While your evasive creatures and levelers carry on the fight, use your spells to support them. Unsummon and Fleeting Distraction can keep the momentum on your side. Last Kiss and Doom Blade can destroy opposing creatures outright. Better yet, use Domestication to gain control of your opponent's creatures. If your spells are still not enough, enlist the help of Sphinx of Magosi, a massive flying creature who gets a +1/+1 counter and lets you draw a card for just

. Anyone who can't solve its riddle be out of the game in no time!

Rise of the Eldrazi booster packs contain many cards that can improve the "Levelers' Scorn" deck—the most important being more levelers! Nirkana Cutthroat is a vampire that becomes a 5/4 creature with the lethal combination of first strike and deathtouch. Guul Draz Assassin is also a vampire, and with a few level counters can eradicate opposing forces. Finally, if you have the opportunity, secure the services of a fully-leveled Lighthouse Chronologist. With its help, you'll take two turns for every one your opponent takes! 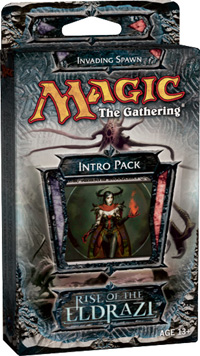 The "Invading Spawn" deck lets you harvest the spawn of the monstrous Eldrazi that have begun to rampage across Zendikar's landscape. Many of your creatures create Eldrazi Spawn creature tokens, including Pawn of Ulamog, Emrakul's Hatcher, and Rapacious One. Your spells also get into the act. Corpsehatch and Essence Feed provide Eldrazi Spawn in addition to removing a creature or draining life from your opponent.

Each Eldrazi Spawn can be sacrificed to add o1 to your mana pool, but your deck features many other ways to use your burgeoning brood. The Eldrazi Spawn are expendable, so don't hesitate to sacrifice them—to Bloodthrone Vampire for a temporary boost, or to Magmaw for damage! Hand of Emrakul will happily appear if you sacrifice four Eldrazi Spawn. Lavafume Invoker will transform the Eldrazi Spawn into a mighty attacking army. If nothing else, you can sacrifice your Eldrazi Spawn for mana to fuel a huge Fireball or to pump up Drana, Kalastria Bloodchief.

Many other Rise of the Eldrazi cards can help the "Invading Spawn" deck. Raid Bombardment deals 1 damage to your opponent every time a creature you control with power 2 or less attacks, even creatures with 0 power like the Eldrazi Spawn. Skittering Invasion creates five Eldrazi Spawn—perfect for when your Magmaw or Hand of Emrakul is feeling ravenous. If you can, harness the power of the planeswalker Sarkhan the Mad. Once each turn, he can essentially change any creature on the battlefield into a 5/5 red flying Dragon! 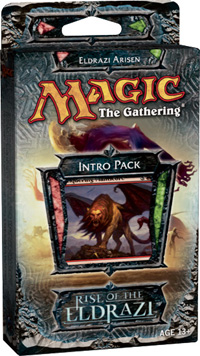 The "Eldrazi Arisen" deck puts you in command of the Eldrazi, an ancient race of behemoths that has awoken and begun to terrorize the inhabitants of Zendikar. The stars of your deck are Ulamog's Crusher, Hand of Emrakul, and Pathrazer of Ulamog. Each of these Eldrazi creatures is 7/7 or larger, and all have the annihilator ability that forces an opponent to sacrifice a number of permanents every time you attack with them. Your goal is to cast them as quickly as possible and then ride them to victory.

With creatures as impressive as the Eldrazi, you won't need much help once they're on the battlefield. However, you'll need to find enough mana to cast them, and many of your cards help you do that. Nest Invader, Kozilek's Predator, Rapacious One, and Awakening Zone create Eldrazi Spawn creature tokens, which can be sacrificed add

to your mana pool. Growth Spasm and Ondu Giant put lands from your library onto the battlefield. Dreamstone Hedron can add

to your mana pool or can be sacrificed for three cards, whichever the situation calls for. Despite their hefty costs, the Eldrazi should be well within reach.

You can improve the "Eldrazi Arisen" deck with cards from Rise of the Eldrazi booster packs. The easiest way is to add even more huge Eldrazi creatures like Artisan of Kozilek, a 10/9 creature with annihilator 2 that returns a creature from your graveyard to the battlefield when you cast it. It That Betrays also has annihilator 2 and puts cards sacrificed by your opponents (like those sacrificed to the annihilator ability) onto the battlefield under your control. And the most terrifying of all the Eldrazi is Emrakul, the Aeons Torn. Emrakul is 15/15, has annihilator 6, and gives you an extra turn when you cast it! 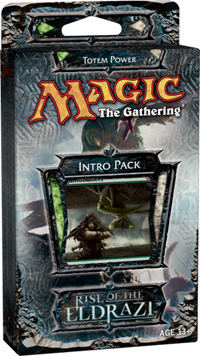 The "Totem Power" deck lets you harness the primal power of Zendikar's wildlife. Each enchantment with totem armor makes the creature it enchants bigger. In addition, the totem armor ability means that if the enchanted creature would be destroyed, instead only the Aura is destroyed. Use your Auras with totem armor to protect your creatures and make them large enough to run over any opposition. Those Auras also work well with Kor Spiritdancer, who gets an additional +2/+2 for each Aura enchanting it.

You can win the game with your creatures even without the help of totem armor. If something stands in their way, use Pacifism to keep it from blocking or Prized Unicorn to distract it so that your other creatures can get through. You can also crash through with sheer size. Cudgel Troll and Stomper Cub are large enough to dominate most defenses. Pelakka Wurm is a 7/7 creature with trample, and if that's still not enough, Gigantomancer makes any of your creatures 7/7. If you have enough mana, why not make all of your creatures 7/7?

Rise of the Eldrazi booster packs contain many cards that will help the "Totem Power" deck. Look for other Auras with totem armor like Hyena Umbra, which gives a creature +1/+1 and first strike, or the impressive Snake Umbra, which lets you draw a card every time a creature it enchants deals damage to an opponent. If your totem armor enchantments aren't enough to protect your creatures, enlist the help of Deathless Angel, which can make any creature indestructible for a turn!