am writing this installment of Week In Review from a hotel room in Las Vegas. Game manufacturers, store owners, and other folks who make their living in the game industry are attending a summit here called the GAMA Trade Show. Similar to Origins or Gen Con for players, this is the major convention of the year to be at for an industry insider. Game manufacturers like Wizards of the Coast take the time to meet face to face with the people who sell their games, talk about upcoming products and programs, and generally thank retailers for helping make their brands a success.

Wizards of the Coast is a major presence at GAMA Trade Show every year, and this time is no different. I was hoping to report some exciting Magic news hot off the presses at GTS, but it seems there are no major announcements for now, as WOTC is concentrating on their other product lines at this show.

GTS is also the annual site of the Tournament Organizer conference. People who are entrusted with running Pro Tour Qualifier and Pre-Release tournaments gather in Vegas to meet face to face with WOTC Organized Play department personnel, learn the new policies and programs and provide feedback to the company as well as network amongst themselves to make those tournaments even better for you.

While not everyone can run a PTQ, some stores have done a great job banding together to create their own events. There is no better example than North East Challenge. Spearheaded by Tom Shea of TJ Collectibles in Massachusetts, this has become an important tournament circuit on the East coast over the last few years.

The idea behind it is to have a number of stores hold qualifier tournaments, culminating in a large cash prize tournament at the end of the several-month long qualifier season – much like the Pro Tour qualifiers feed into the Pro Tour. The series had its humble beginnings with just a few stores and under an original name of New England Challenge. It has continued to grow – partly due to significant player interest, and partly due to a ton of PR work that Tom Shea has put into it. 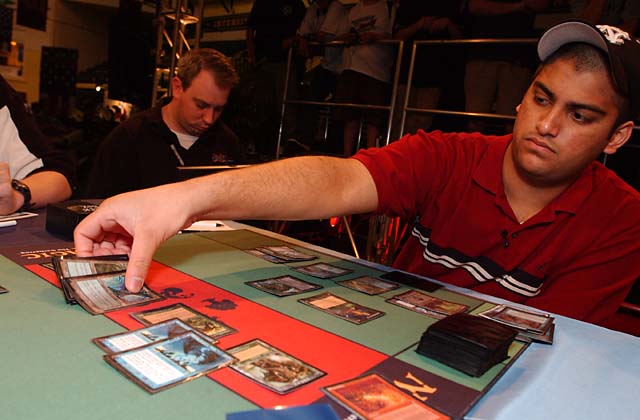 Kush Patel, 2002 New England Challenge Champion NEC received detailed coverage on The Sideboard over the last two years. This year's circuit was previewed in a recent issue of Scrye magazine, and it will be featured in Mage magazine.

As the circuit developed, it outgrew its old name and was referred to as North East Challenge. This year even that is not enough to describe it as more stores from around the country are signing on. It is now called the North American Challenge.

This year, the NAC winner will earn a cool $2500 – that's more than a first place at a Grand Prix! The top 24 players will earn cash and everyone who makes it to the final tournament will receive generous booster pack prizes. Stores are going to begin holding qualifier events in April. Each participating store will host five qualifiers. The winner of each of these tournaments as well as one player with best overall performance throughout the five events who did not win one, will qualify for the finals. The store that sent the most successful team to the Challenge will also win a trophy.

For most players, NEC qualifier tournaments will also provide an opportunity to hone their Standard skills in time for the Regional Championships. Deck lists and results from the NEC as the largest scale Standard events due in the next few months are likely to shape the Regionals metagame and thus will be watched closely by the players.

Both players and store owners that are interested in participating this year will find detailed information about the NEC on tjcollect.com

What is the difference between the Alpha and Beta rulebooks?

The Alpha rulebook featured a two-page short fantasy story describing a battle between two planeswalkers. It was cut from the Beta rule book, perhaps to make room for more rules clarifications.

What cards were printed in Beta, but not in Alpha?

Both of these plays are share the theme of using a cantrip (a card that has the ‘Draw a card' ability in addition to whatever else is does) to win the game.

“My play group uses a box of old commons and uncommons to make re-packs and draft from. We use cards from many Magic expansions so it makes for some strange combos. In this particular game I was down to a Grizzly Bear with just one card in hand, while my opponent had a Nim Abomination swinging at me. Down to two life points, I had no choice but to block it. My one card in hand was Guided Strike, so it gave me a chance at one more card. There were only a dozen or so cards remaining in my deck so after thinking hard about what was left, I cast Guided Strike… on the Nim Abomination! My 1:12 gamble paid off as I drew exactly the card I was hoping for – a Test of Faith! I used it to prevent three of the four points of first strike damage the Nim dealt, making the Bear a 5/5 creature before it got to deal its own damage. At the end of the turn the tables have turned, and I was able to go on to win this game, putting up with my opponent's quips about how lucky I was for days to come.”

“I was playing a casual game with a guy at our local game store. He was using a Zombie deck that contained a splash of Green for Strength of Night and I was playing a blue/red Darksteel Reactor deck. I was doing my best at stalling him with Vedalken Engineers and Coretappers as blockers while with two Aether Vials, one Power Conduit and a Coretapper I attempted to charge up the Reactor in time. I could not draw a creature in several turns though my Sun Droplet was keeping me alive. I was rapidly running out of blockers - and life. Calculating that I would be finished by his next combat phase with only sixteen counters on the Reactor, I drew, hoping for a Dismantle. I sighed in dismay as I drew a Sculpting Steel. I could copy my Power Conduit, but it would only get me to seventeen counters on the Reactor. Mind racing, I looked around the field for something I could do. It was then I noticed the innocuous-looking Chromatic Sphere on my opponent's side of the field. An act of desperation it was, but I copied his Sphere and used it for a point of red mana, hoping that the Sphere's card-drawing ability would get me something I could use. I drew the card, and to my infinite pleasure, I saw my savior - Dismantle. I Cast the Dismantle on the Reactor, ending up with thirty-two counters on the Reactor and the win.”

“I was playing a local Type 2 Friday Night Magic event with my Blue/White Control deck. My opponent was playing a monored land destruction. He had just attacked with his Rorix Bladewing in game three of the match and had eight mana untapped, but he was at 1 life. He was going to kill me with his Rorix the next turn, so he tapped three to Molten Rain one of my lands. The loss of this land would mean I wouldn't have enough mana to cycle my Decree of Justice for one Soldier token and Mana Leak the potential Starstorm, so I played Mana Leak on the Molten Rain. Strangely enough, he paid the three, leaving only two untapped, and I cycled Decree at his end of turn step, with him unable to play the Starstorm he did indeed have. I attacked with my one token over his tapped Rorix for the win. Everyone was wondering why he paid the three mana when he had Starstorm in hand.”

“This ‘bad' play of the week comes from a game of Type 1 I was playing. It was my first match with a new combo deck based around Goblin Charbelcher - the deck runs on only two lands. I won the roll, and had to mulligan once. I kept the six, and my opponent kept his hand. I played out a Black Lotus and Lotus Petal, sacrificing them both to play Goblin Charbelcher. I played the Bayou in my hand, and played Land Grant for free, fetching the only other land from my library. With the Bayou, I played Eladamri's Vineyard, to ensure that I would have 3 mana to activate the Charbelcher next turn and win. Passing the turn, my opponent knew I had only a land in hand and that the Charbelcher was probably lethal next turn. He drew for the turn, played a Mountain, and cursed his luck. "Remember, you have

in your pool," I reminded him. He paused for a second, and used the mana to cycle Scrap.”